A summer of “education, action, and reflection.”

By Mia Campbell, Kalmanovitz Initiative for Labor & the Working Poor at Georgetown

This summer was one of the most rewarding and eye opening times of my life. The Kalmanovitz Initiative Summer Organizing Internship program gave me the opportunity to learn more about my capabilities and myself as well as learn more about others. When I was in high school, I would always try to stay involved in social justice work, keep myself educated about current events, and help communities through volunteer projects and raising awareness about problems. To some degree, this summer was a continuation of the work that I did in high school, but more so, it was an expansion of those skills and an immersion within the community that I was working to help find it’s own strength and power. 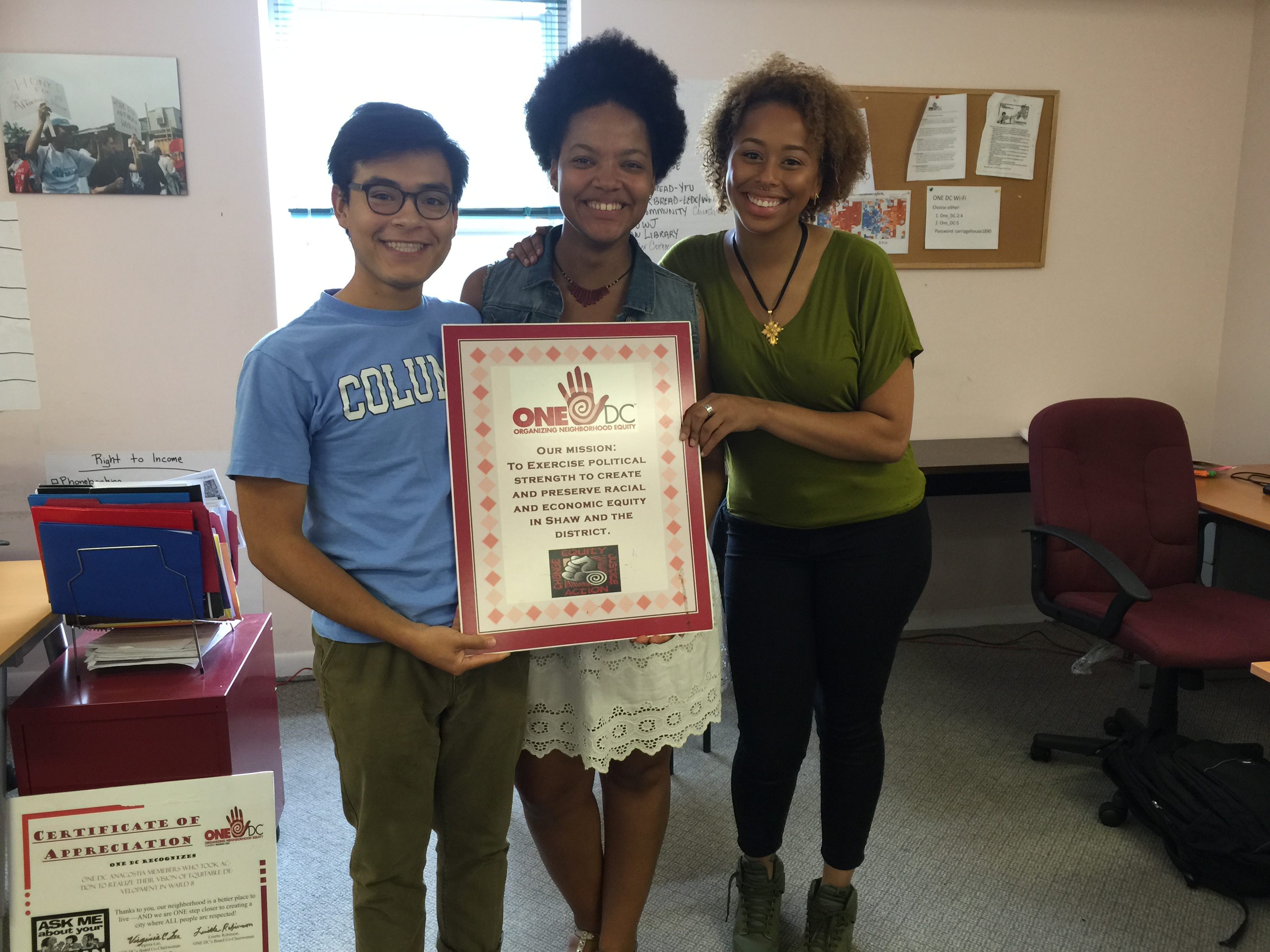 Each day in the office, my responsibilities included administrative work such as updating the database with member information, drafting and sending email blasts about our events, creating flyers, participating in meetings, helping plan upcoming events, and most importantly, learn how to use my skills to advance the agenda of the organization. ONE DC and its members work together to strengthen communities through community development or organizing. It helps those who have been silenced by the oppressive structures at play in our society find their own voices and in that, their power. ONE DC addresses the structural causes of poverty and injustice and works to educate people about the realities behind the problems people face in their everyday lives. The leadership structure is most unique and I personally believe it could be a great model for organizing power in the future. Horizontal leadership is the way the organization operates where the leadership is shared along with the responsibilities. Being part of this structure was daunting at first because I am used to working in a top down power structure. It was a breath of fresh air and helped me open my mind to different methods of operation.

There was never a boring day at work. Some days we would be in the office, making calls or writing emails and then one of our members would pop into the office for a visit and brighten up our day. Other days, my fellow interns, my co-workers and I would just start talking about life and the state of affairs. Our conversations would range from friendship to structural problems within our communities and the ways we could change it. I distinctly remember one of our first days in the office. We had a brief meeting to address some of the tasks we had for the week and we were getting ready to tour the Shaw-Howard area with Claire and Jennifer. As we were walking around, Claire would stop and show us a picture of what used to be where we were standing. Seeing those changes in such a powerful way, with the past and present right next to one another, really moved me to want to work hard to help however I could.

One of the most memorable parts of that day was at a later point in our tour when we were standing in front of what is now a luxury apartment building. On that plot of land there used to be a quaint apartment complex. As we were looking at the picture being held up against the current buildings, a man who lives in the area walked by and was shocked. He asked if the picture was what he thought it was; which was the old apartment complex that some of his family used to live in. He had a light in his eyes as he spoke fondly of memories and family and then the light faded as he turned and looked at the new apartment building. He talked about the way his family was pushed out of their homes and how he is working hard to support his family and one day hopes to move out of his apartment and have a house to call his own. That interaction, which lasted no more than four minutes, was the purest way for me to see the impact that gentrification has on DC residents. There is so much lost when a building is torn down. There is history, life stories, memories, and so much more attached to the places that are being destroyed and replaced. My summer with ONE DC really helped me learn to look at things beyond their face value. Now, when I look at new things, I always think about what came before, who was there, and what their lives were like. 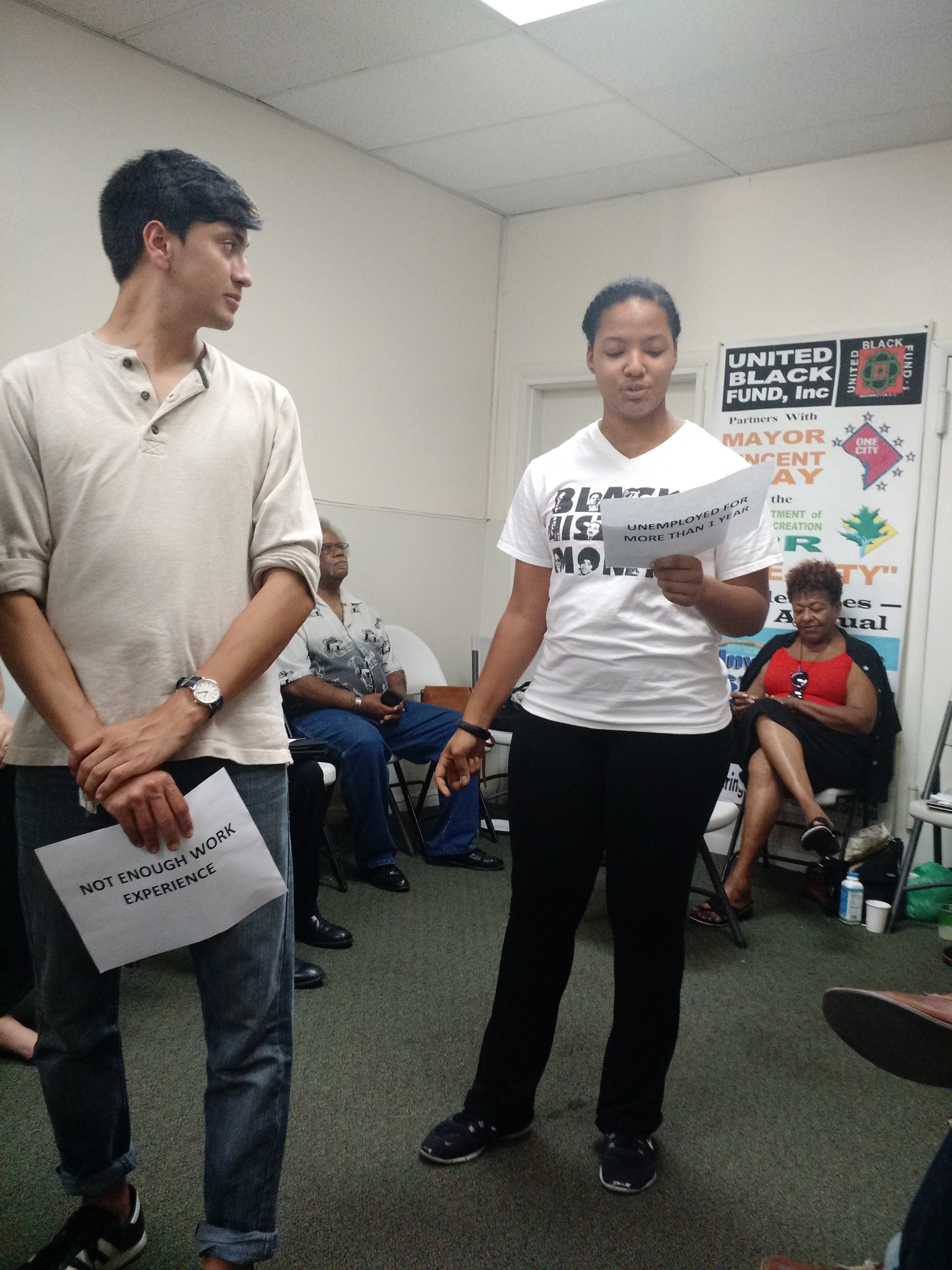 Not only did I grow as a professional, but I was also given the opportunity to mature this summer. I had to figure out my own living situation, take care of myself, and really grow into adulthood. Each day my commute included a nice walk from my apartment to the metro and a quick metro ride to the office. I looked forward to that morning walk because I really felt like part of the community. There is a church on the corner where the metro stop is and each morning I would pass by and have a nice exchange with the older men and women who always sat outside of the church. I already miss my small studio apartment in Petworth where I would spend so much time reflecting on the work I am doing and how it connects to the work I want to do in the future. In the future, I hope to be a doctor. I want to be a doctor who really gets to know her patients and connect with them on a personal level. Understanding the way new developments and gentrification impacts the health of people is my next step. I want to understand more about sociomedial studies, the connection between health, medicine, and society. This was just the first step and community organizing has made its way into my heart.

It was a summer of growth, self-discovery and realizations of the best kind; learning how to finding my voice and using it to help however I can. It was a summer of growth in consciousness; an awakening. My eyes have been opened and now there is no turning back. Thank you to all of the people at the Kalmanovitz Initiative who made this summer possible. From my conversations with the other summer interns, I believe that they did a wonderful job pairing interns with organizations. Nick, especially, was extremely helpful with prepartations for the summer and I am so grateful. Thank you to Dominic, Jennifer, Claire, Marybeth, Rosemary, Kevin, Assata and everyone from ONE DC for being part of this journey with me.