ONE DC tenant members and residents at Brookland Manor request your support on Monday, April 24, 2017 at a 5:00 PM rally followed by a public Zoning Commission meeting at 6:30 PM. Click here to RSVP

The Zoning Commission is expected to publicly discuss and announce their decision as to whether or not to continue to allow Mid-City Financial to move forward with their plan to eliminate affordable housing in the midst of an affordable housing crisis, and to cut out desperately needed family sized units at Brookland Manor in Northeast Washington, D.C. Mid-City's plan is particularly egregious when one considers the fact that they are calling to cut family housing and affordable housing while simultaneously tripling density.

It is CRUCIAL that the public show up to demonstrate opposition to a plan that would displace families from the city, keep them warehoused in shelters, or forgotten in the streets. Working class Black communities are under attack across the city by wealthy developers, and the politicians who do their bidding. It is IMPERATIVE that the public hold the Zoning Commission accountable and stand in solidarity with the tenants of Brookland Manor who have led and continue to lead this struggle to preserve their right to the city.

The location is 441 4th St NW and the closest metro station is Judiciary Sq (red line).

Here are three other things you can do to support the movement for our human right to housing:

1. Sign up to phone bank for the upcoming rally by emailing Claire at [email protected]
2. Support ONE DC's fundraising goals by becoming a sustaining donor
3. Attend the next People's Platform meeting 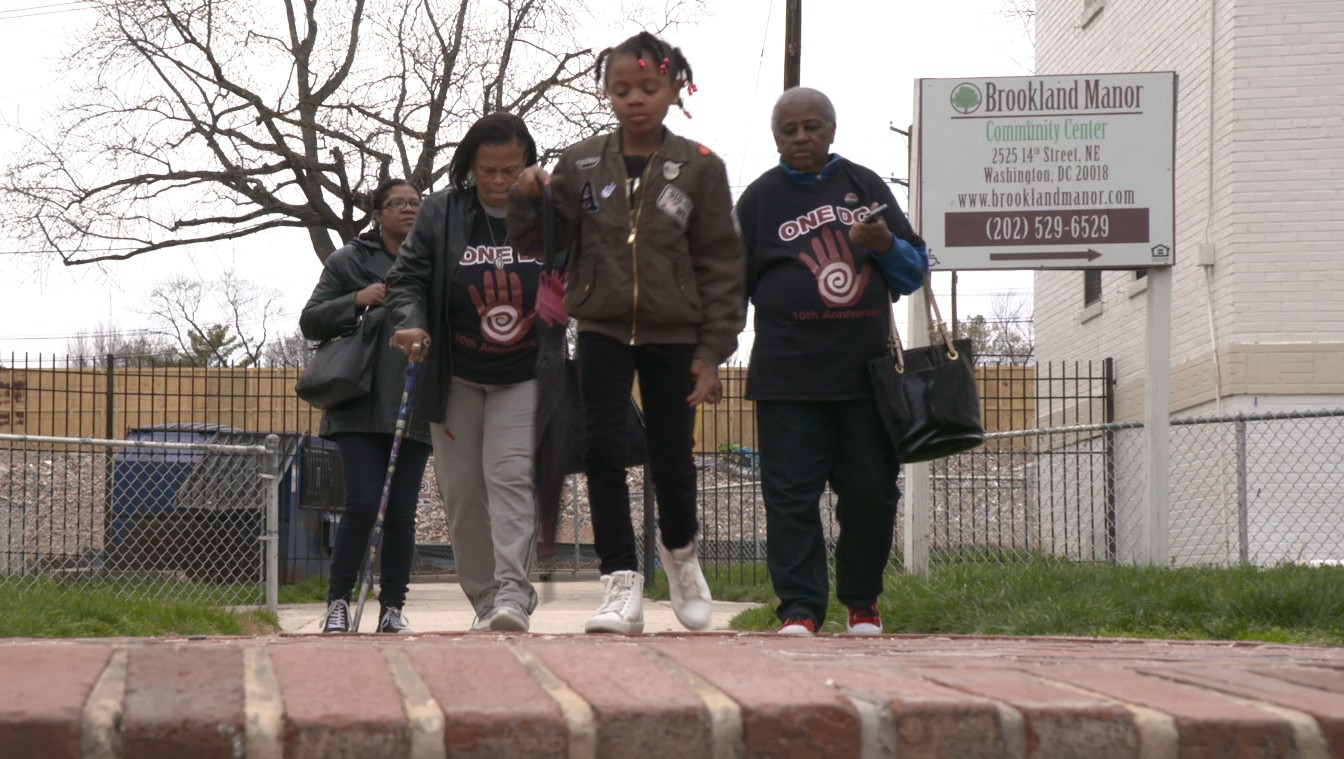 Currently, Brookland Manor houses 535 affordable units, including 3, 4 and 5 bedroom units that accommodate families. Mid-City’s redevelopment plan proposes to eliminate all 4 and 5 bedroom units, and most 3 bedroom units. It also proposes to reduce the overall number of affordable units from 535 to 373 while restricting 200 of those units to seniors only (aged 62 and older). Mid-City plans to simultaneously triple density by building over 1,750 units of luxury apartments at Brookland Manor.

Mid City’s plan to redevelop Brookland Manor must be approved by the DC Zoning Commission. Zoning Commission approval occurs in multiple stages.
At the first stage zoning hearing on Brookland Manor back in 2016, representatives of Mid-City suggested that due to “natural attrition,” some tenants would leave Brookland Manor, and that their absence from the property would help to justify Mid-City’s plans to build luxury apartments in place of deeply affordable housing. Rather than “natural attrition,” what residents at Brookland Manor have been subjected to is a calculated and planned displacement campaign. Mid-City has 1) divided and evicted dozens of families; 2) erected fences that physically divide the community and hinder freedom of movement 3) hired armed security guards to patrol the property and serve tenants with notices of infraction for breaking “community rules,” which include transgressions such as having a plant in the hallway, standing on the grass, and standing outside.

However, Mid-City’s plan to intimidate and harass tenants has not worked. In fact, their heavy handed tactics have galvanized the both the tenants at Brookland Manor and the surrounding community.

At the most recent Zoning Commission hearing, which took place over two days (February 23, 2017 and March 16, 2017), Mid-City’s attorney attempted to use loopholes in order to avoid discussion on the key issues of their plan with respect to affordable housing and displacement, and instead attempted to focus the meeting on the color of the bricks and the kind of shrubs that would be planted as part of their planned redevelopment. The Tenants goal was to ensure that the Zoning Commission recognize that Mid-City’s redevelopment plan denies Brookland Manor residents their right to live in the redeveloped property and that Mid-City has engaged in an extensive campaign of planned displacement (A video of the hearing can be found HERE).

Throughout the night, resident stories of how private security targeted them by serving arbitrary infractions for leaning on fences or waiting for the bus with their children clearly troubled members of the Zoning Commission. Residents explained how when they began to organize to protect their community Mid-City’s private, armed security harassed and threatened local organizers with arrest. Organizers also recounted stories of being barred from attending meetings organized by Mid-City, despite the fact that the Residents Association requested their presence. It was clear to many in attendance that Mid-City’s actions demonstrate that they desire nothing more than sweep the Brookland Manor residents out of the community.

In conclusion when discussing Mid City’s current proposal, ONE DC organizer Delonte Wilkins summed their plan perfectly, “If you consider us human, then there’s no question. Displacement is not acceptable. This development has no legitimacy.”