ANC 5B has passed a resolution in opposition to Mid-City Financial's luxury redevelopment plan at Brookland Manor. The resolution expresses strong support for the reasonable and viable demands of the Brookland Manor Residents Association, including the Preservation of the 535 units of affordable housing that currently exist on site at the current bedroom sizes and current subsidy levels. This support comes in the wake of continued harassment and intimidation by armed, private security forces at Brookland Manor.

The Brookland Manor Residents Association is continuing its work to issue requests for resolutions and letters of support from remaining Ward 5 ANCs and other community organizations in the interest of preserving affordable and family housing in Ward 5. 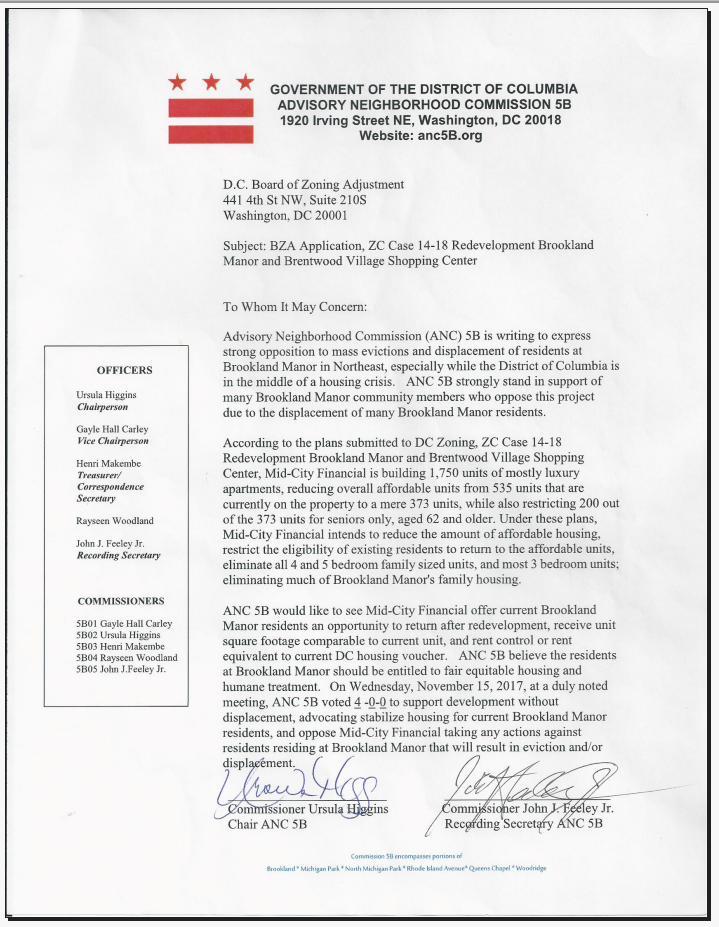 Ways to support the resident-led organizing campaign at Brookland Manor:

1. You can express your continued support for development without displacement at Brookland Manor by forwarding this update to Ward 5 council member Kenyan McDuffie at [email protected], or by calling him at 202-724-8028. We continue to call on Kenyan McDuffie to immediately end his support for Mid-City's predatory development plan, and to express public support for one-for-one replacement of affordable housing at existing subsidy levels and bedroom sizes at Brookland Manor

2. If you are a Ward 5 resident, contact your local ANCs and Civic Associations

3. Support ONE DC organizing by becoming a member or making a donation