Historically Black DC paper, the Washington Informer, has published an article that supports a plan for gentrification, and the displacement of hundreds of Black families from Northeast Washington, DC.

The article is co-written by Thaddeus James and Kim Edwards, both of whom reside at Brookland Manor. James and Edwards are actively working with wealthy developer Mid-City Financial to support a redevelopment plan that will require the mass displacement of long-time, working class Black DC residents from our community in the name of profit. If you question the profit motive, look no further than this WAMU interview with daughter of Mid-City CEO Eugene Ford Jr, Maddie Ford, also Mid-City's director of legal affairs, who stated, “The smaller the unit size, the more people you can have there, the more money you can get per unit...The smaller your units are, the more profitable they are.”

In the article, Ward 5 council member Kenyan McDuffie is hailed as a supporter of the community, when in fact, he has demonstrated quite the opposite. McDuffie stands with developer Mid-City Financial, supporting their plan to profit from the displacement of his own constituents. In a recent mock people's trial, McDuffie was found guilty of crimes against our community, the evidence of which is documented in this 7-minute video presentation.

Mid-City's plan to move forward with the reduction of affordable housing units is sanctioned by city officials like McDuffie, and the DC Zoning Commission, in the midst of an affordable housing crisis and skyrocketing rents in the nation's capital.

To facilitate their plan, Mid-City has egregiously engaged in a brutal eviction campaign that is ongoing. Previously, the Washington Post, along with many other media outlets, have exposed Mid-City's ongoing actions. The Neighborhood Legal Services Program, in a letter submitted to the zoning commission, documented Mid-City's ongoing eviction campaign.

Currently, Mid-City is engaging in aggressive attempts to harass and intimidate residents of Brookland Manor. Shockingly, Mid-City is issuing notices of infraction as a basis for evicting tenants for sitting outside in our own community. One resident, Ms. Jennifer Sewell, faces ongoing harassment and intimidation by Mid-City for sitting outside. Here is a photo example from recent infraction she was issued, showing her "violation." 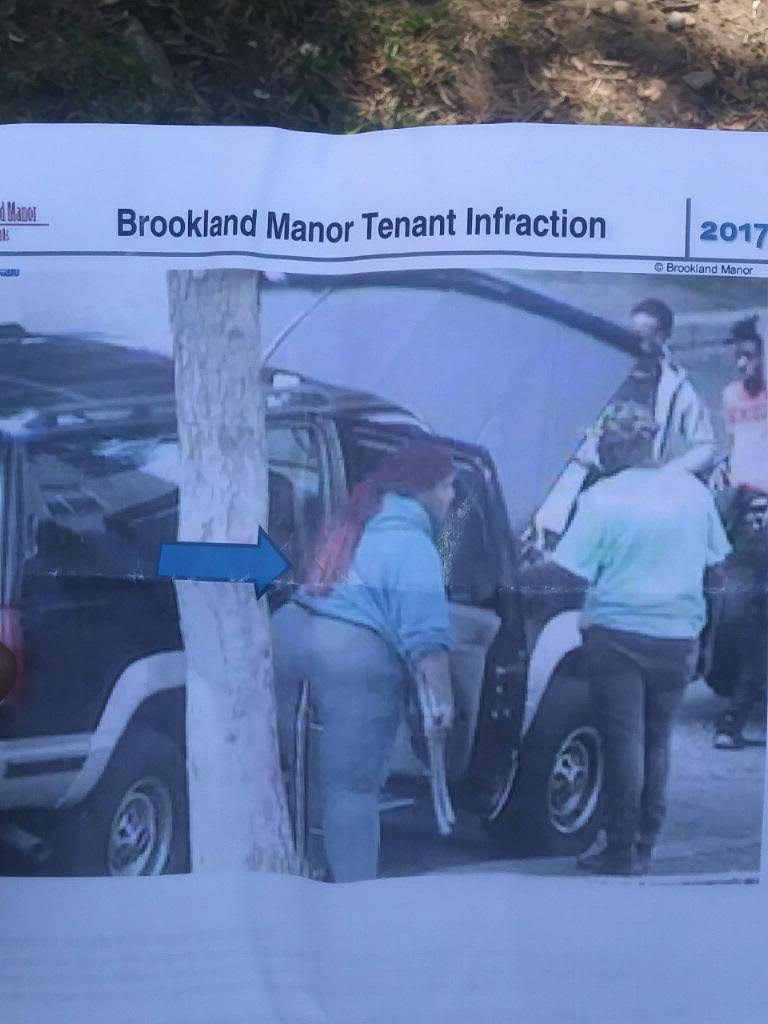 Mid-City is now using these infractions as grounds to attempt to evict Ms. Sewell from her home. We have assisted Ms. Sewell in securing an attorney to represent her in this matter.

Recently, Mid-City issued letters to us that restrict access to community spaces. We understand this move to be a part of their ongoing attempts to interfere with our right to organize. We ask the wider DC community to continue to stand with the families fighting Mid-City's predatory redevelopment plan, by increasing public exposure of, and pressure on, council member Kenyan McDuffie for his role in our suffering.