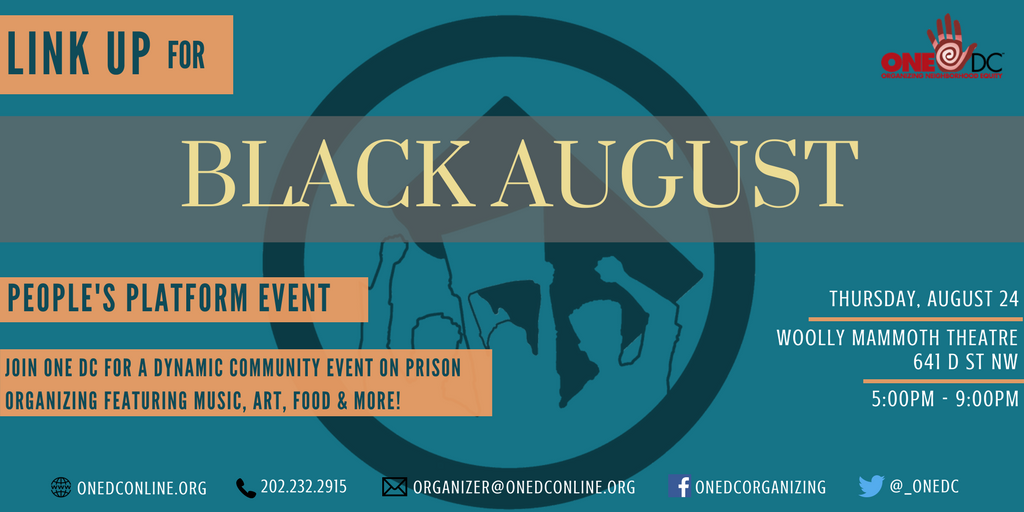 Join ONE DC for a dynamic community event commemorating Black August, including political education on prison organizing, as well as musical performances, artwork, food, vendor tables, a back to school supplies drive, and more, in line with People's Platform principle #7: Full access for returning citizens to housing, jobs, education, as well as decriminalization, demilitarization, and prison abolition.

This event is free & open to the public. We encourage attendees to bring items from the K-12 School Supply List for our Back-to-School drive.

What is Black August?
A month to commemorate the struggle for Black liberation, the sacrifice of political prisoners, and the injustice of mass incarceration, as well as remembrance of the death of George Jackson, a Black revolutionary who was assassinated by guards during a prison rebellion at San Quentin on August 21, 1971. Quentin Six veteran Sundiata Tate’s described Black August as occasion to “embrace the principles of unity, self-sacrifice, political education, physical training and resistance.”

What is the ONE DC People's Platform?

The People’s Platform is a movement of low-income and working class DC residents of color and people who share our values and vision. We seek to organize, educate, fight for and win truly affordable housing, sustaining work, and wellness for all in DC. Our monthly People's Platform general body is a space where we work towards our goals by prioritizing political education and leadership development in our work; centering the leadership of working class black women; being funded by our base; always seeking to build a deeper analysis and assessing our work; building alternative institutions; learning from past movement's successes and limitations; championing non-reformist reforms; and always seeking to be a part of a broader movement that is multi-national, multi-ethnic, multi-gender, and multi-class.