The People’s Platform is a movement of low-income and working class DC residents of color and people who share our values and vision. We seek to organize, educate, fight for and win truly affordable housing, sustaining work, and wellness for all in DC. The state of income & housing security and wellness for DC residents is bad and only getting worse. Where the city has successfully encouraged wealthier and whiter residents to move into the city, it has destroyed welfare and social programs, attacked workers’ rights and supported a severe reduction in spending on programs for the most vulnerable. The beneficiaries of this policy are the wealthy.

We envision a DC that is equitable and just place to live for all of its residents. We demand that the District of Columbia become accountable to the needs of its residents, not developers and corporations, and not just the 1%.

We will accomplish our goals by centering the leadership of working class black women; being funded by our base; prioritizing political education and leadership development in our work; always seeking to build a deeper analysis and assessing our work; building alternative institutions; learning from past movement's successes and limitations; championing non-reformist reforms; and always seeking to be a part of a broader movement that is multi-national, multi-ethnic, multi-gender, and multi-class. 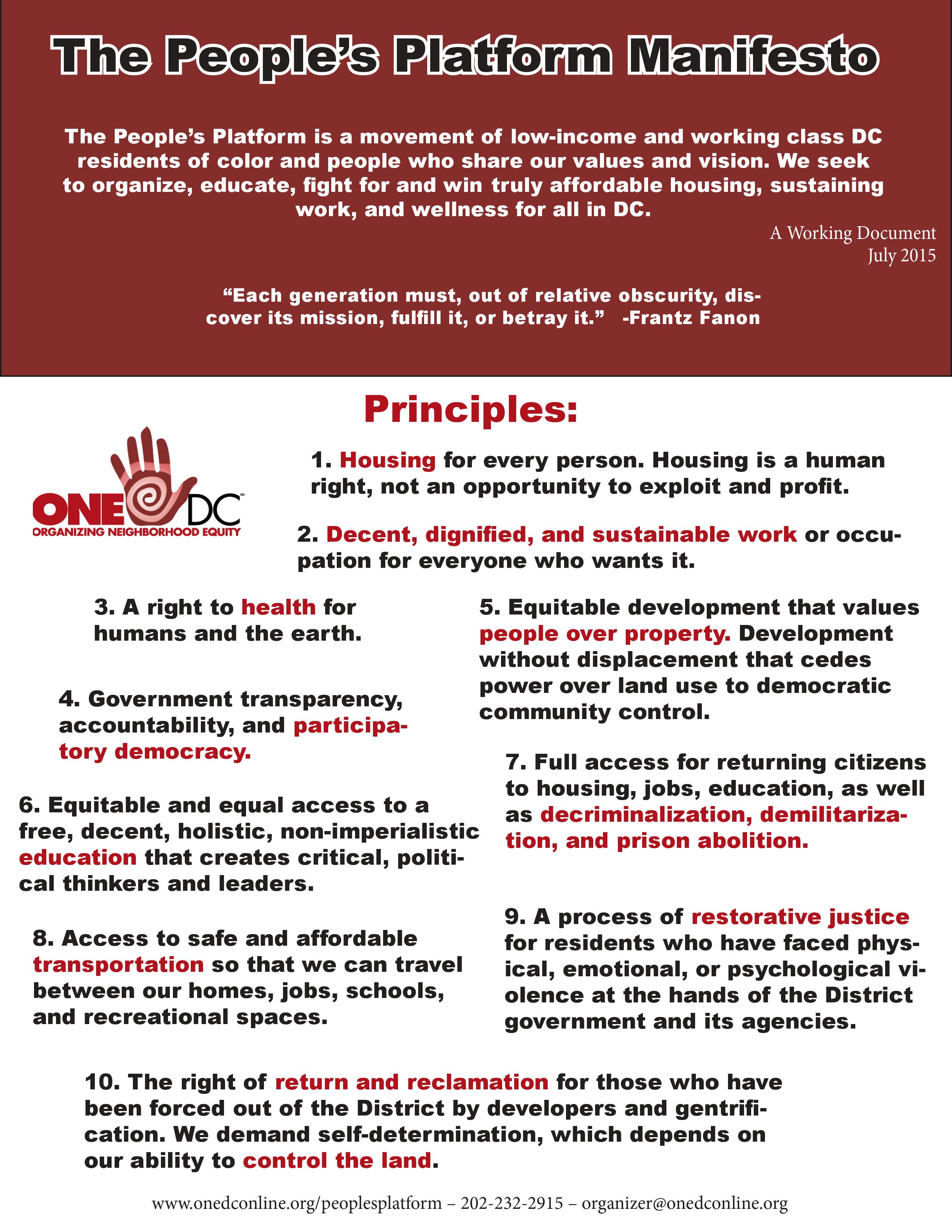 Read The People's Platform: A Roadmap to Achieving Racial & Economy Equity in the District.

Community Control over Land Use:

District of Columbia’s government is not a corporation. Our public officials should not act as developers selling public assets off to various corporate or private interests without any real assessment of the needs of the DC public. This form of governance led by free-market values has facilitated the loss of valuable public property. Community involvement in this process has been severely curtailed. For the most part, these transactions are simply giveaways to private developers. Real community control over land use ends these corrupt giveaways and requires public land be used to meet the community’s needs, not political/private interests.

Equitable development means that any urban development project meets the needs of the existing residents, including long-time, low-income residents of color. Much of the development in this city has been geared towards recruiting wealthier “millennials,” while ignoring the housing and land-use needs of families. DC’s commitment to equitable development without displacement requires that public dollars are spent to generate living-wage, unionized jobs, permanently affordable housing, worker-owner cooperatives, progressive tax schemes and much more.

Housing should not be a commodity in DC; it must be considered a right. The speculative and privatized approach DC officials have towards developing housing in the city has left thousands of DC residents homeless and much more enduring massive rent burdens or risking eviction. To make matters worse, the city adheres to the federal definition of affordable housing set by the Area Median Income (AMI), which allows the city to claim the creation of affordable housing that often does not meet the needs of long-time, low-income DC residents of color. Lastly, the city has allowed the speculative aspect of housing to result in the loss of units covered under affordability covenants, permitting private owners to ‘opt-out’ and cajole affordable housing renters to move out in order to recruit wealthier residents to take their place.

Washington, DC is one of the most inequitable places in the country, where the top fifth of earners make $259k on average, and the bottom fifth earn only $9k. We demand policies that will transform this worsening trend.

Do you support the People's Platform? Do you believe in fighting for a more equitable DC?

Then sign below to demonstrate your support and let DC's political power structure know what we demand!

In 2013, several local grassroots base-building organizations agreed to use the upcoming city council session and mayoral campaign as an opportunity to promote a comprehensive, structurally-oriented policy agenda. While some gains were made over the years, like improving the living-wage and funding the Housing Production Trust Fund, we felt that much more needed to be done to address the needs of poor and low-income DC residents who have a right to live and work in this city.

In the following months, we hosted several neighborhood forums to solicit residents’ feedback on what they want to see from the next mayor. In these sessions, residents vehemently rejected what they saw as misguided leadership—public leaders who are eager to give corporate tax breaks and meet with developers willing to build stadiums, condos, and market-rate retail while ignoring long-time DC residents of color who ask that our public dollars be used instead for the development and preservation of limited equity housing cooperatives and other affordable housing communities. Ultimately, these residents expressed resounding support for structural reforms in housing and jobs. They also voiced a desire for the People’s Platform to be a comprehensive policy agenda that will cover additional issues as more residents and organizations join our alliance.

On March 8, 2014, a coalition of DC’s largest organizing groups of long-time, low-income residents of color came together to hold an interactive mayoral forum with questions created and posed by long-time DC residents. We challenged the candidates to answer to the need for truly affordable housing and greater economic opportunities for DC residents.

For our alliance, the electoral cycle is just the launching pad. We believe our movement for an equitable DC will take years and as such we have committed to working together for the long term to press for these much-needed structural alternatives.

Our policy reforms are rooted in our guiding principles, which we believe will truly manifest DC’s commitment to become a human rights city.