Those Truly Resilient in DC

By Kevin Ruano, Kalmanovitz Intiative for Labor & the Working Poor at Georgetown

I don’t know whether I want to work as a community organizer. Whether that be because I possibly discovered, in me, the fool who has determined that if he works at an office, he might as well be making bank, or because of the type of organizing that I experienced and performed at ONE DC, I don’t know either. What I do know is that my work at ONE DC gave me a new perspective on organizing, myself organizing, and myself.

From the first day on the internship, it was clear to me that the work ONE DC does—organizing to establish a more economically and racially equitable city—was absolutely needed. What affirmed my conviction was not only the sight of new luxury developments in the Shaw neighborhood of the historically black university, Howard, and the thought that these buildings had taken the place of homes to black communities and peoples, but the encounter with a young man during our tour of Shaw.

We were standing on the other side of the street on which the Jefferson Marketplace Apartments are located. Claire, an administrative organizer, pointing to the building and showing us a picture of another building was telling us that the building across the street was built where the building on the picture was destroyed. A man walked by, surely seeing the picture in Claire’s hands for he walked back to where we were standing. He stood there silent, just looking at the picture. Claire asked the man whether he recognized the picture. He responded yes and said that the picture was of the residence Kelsey Gardens—home of several families—that used to be across the street and was destroyed and replaced by the new luxury complex.

Not only did the young man confirm that communities had been ousted, he also commended ONE DC and encouraged us to continue organizing as we walked back toward the office. 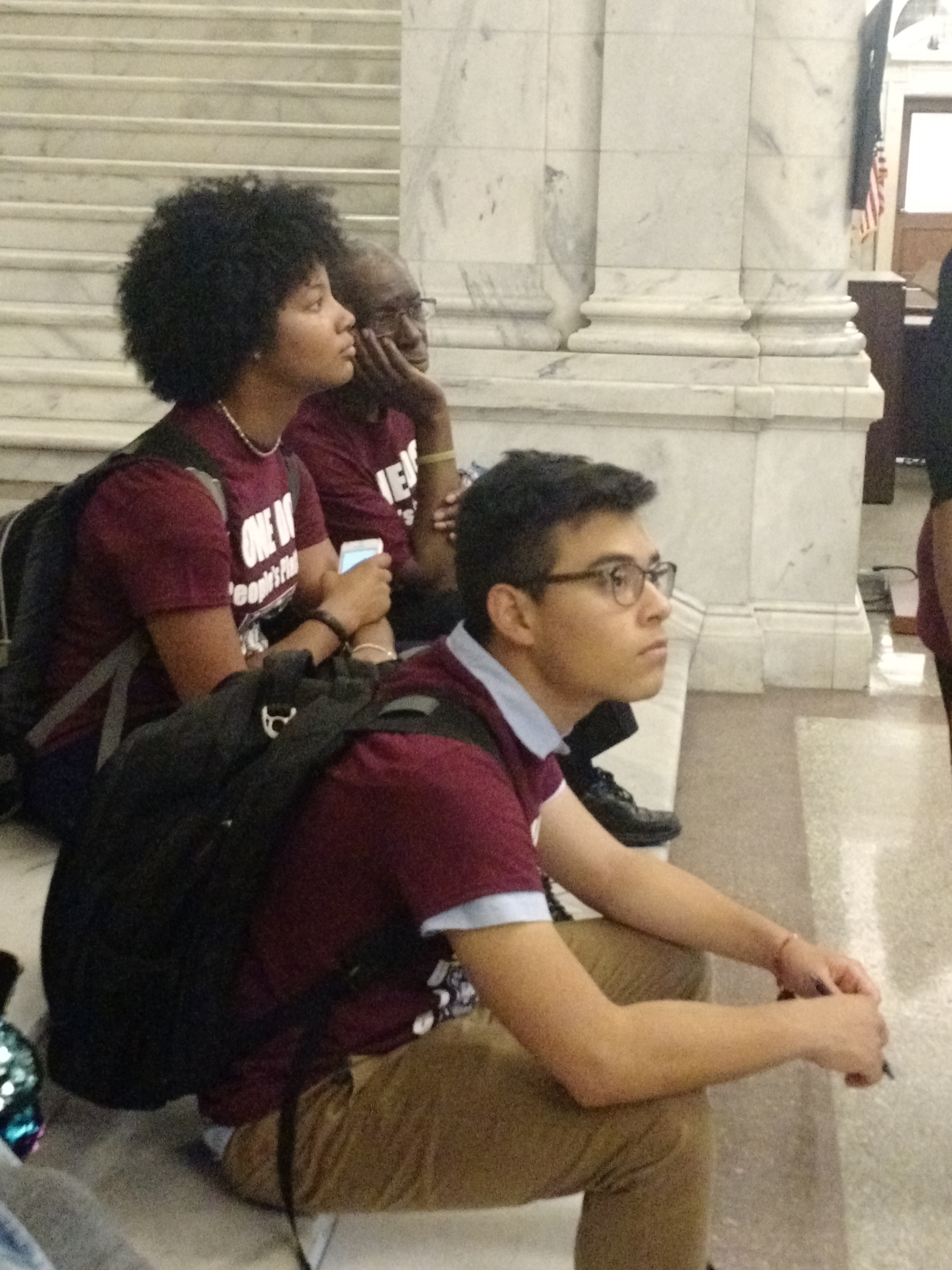 Mia, a fellow KI Intern, and I were tasked with running outreach. We made flyers, Facebook event pages, drafted emails, and phone banking scripts, and phone banked all in an effort to promote ONE DC events namely the upcoming Juneteenth Press Conference, Resisting State Violence Freedom School, and First Source Jobs Action.

Having many days be from 11am-6pm in the ONE DC office mainly concentrated with making calls was never easy. Dialing numbers, and calling those in ONE DC’s database went from an initial fear that I was going to say the wrong thing, to a feeling that I knew the script, to the final thought that I was merely repeating words, not knowing the issues fully and never truly engaging with community members. For me making calls—no matter how necessary the staff of ONE DC said it was and how much they thanked us for the help—became a reminder to me that I felt more of a community at home rather than at the ONE DC office helping out with outreach. Nevertheless, I remember one phone call with one woman who gave me courage.

I was calling to invite people to the Juneteenth Press Conference where ONE DC was going to release a report on the flawed Marriott Marquis training program and First Source Law—how after 200 million dollars to build the hotel and create a jobs training program to connect DC residents to jobs, only 178 of the more than 700 program graduates were hired. I asked the person on the other side of the line how they felt about the program and low hiring rate. She responded that the program was outrageous; how the program run by Goodwill, the Marriott Marquis partner for the training, enforced a zero tolerance policy that required anyone who missed one class to leave the program; how the program made attendees choose between taking care of their children, their own health and wellbeing and looking for other employment all in the hope that they would end up hired. She told me how she, a previous labor organizer at another hotel, came to the defense of classmate who has to attend a family funeral and hence missed a class, and was dismissed from the class, escorted out by a security guard. She said she never ended hired.

The woman asserted that we had to keep those in power, those corporations receiving subsidies paid by taxpayer money and the government giving out the subsidies, accountable to the community. She was talking about what ONE DC was and is: empowering a community. This community—the community to which I was only merely coming into contact with through phone calls; the one I heard through this woman; the community that I got to see and meet through going with members to meetings with the Deputy Mayor for Planning and Economic Development, attending People’s Platform meetings, learning with them about how the state inflicts violence, and demanding with them that First Source be enforced. It was these, the disenfranchised, and robbed by a system of economic and racial oppression that ONE DC worked with.

While I mainly made calls, ONE DC had done and continues to be doing groundbreaking work—work that is aware of injustice, the pain of and value of those who have experienced the destruction of their home, and shortcomings of the law. At ONE DC, I only got a glimpse of those truly resilient in Washington DC. They are not politicians, businessmen or those who are in buildings that appear on the post cards but those in buildings that are threatened everyday by development that is unsympathetic to the feelings and needs of the community whose roots are in DC, who is DC and soon will become who was DC.

I tell you, I don’t know whether I want to organize because stories are best gotten to know and told when I can see your face aka I might never want to see a phone banking script in my life. But that doesn’t change how undoubtedly grateful I am to ONE DC for giving me the opportunity to meet those who are fighting so that they don’t get uprooted; those whose stories need to be told; those that ONE DC is making sure are heard.