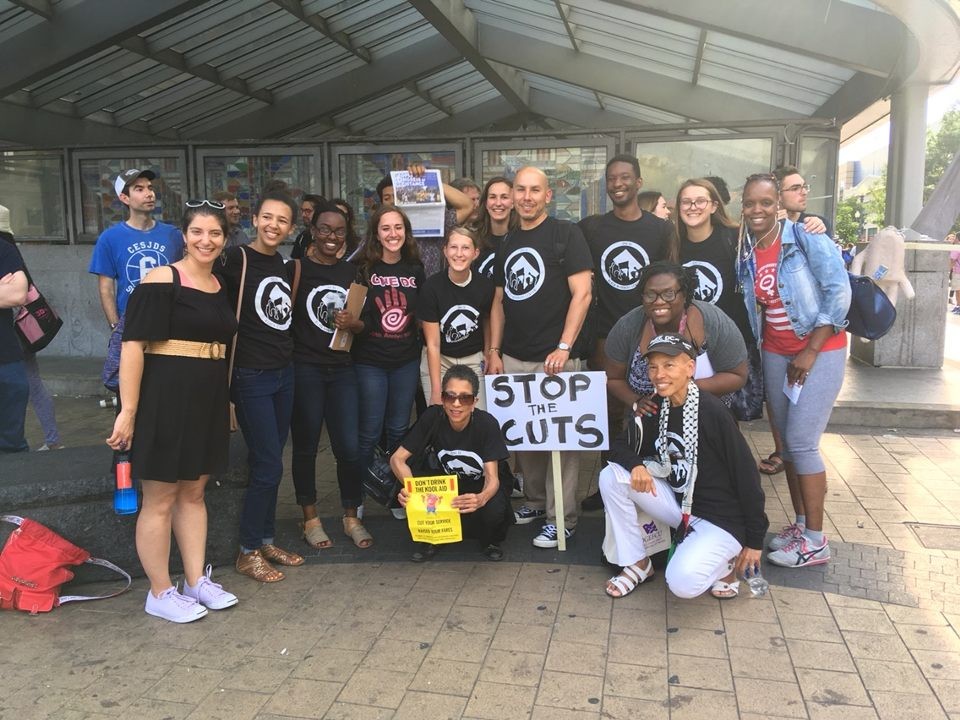 On June 29, ONE DC members joined the Save Our System Coalition in organizing DC residents and community members at the Columbia Heights Metro station for a Transit Justice Rally to express our discontent with the Metro system, with the goal of bringing awareness to how the community can fight for People's Platform principle #8, Access to safe and affordable transportation so that we can travel between our homes, jobs, schools, and recreational spaces.

In the past two years, construction has hindered the daily ride for many Washingtonians who commute via Metro, and WMATA has done a poor job of providing alternate transportation for those of us who rely on this system. Despite the community’s concerns, WMATA has chosen to ignore those who depend on Metro as their primary means of transportation, and has implemented new policies that further restrict our access to safe and affordable transportation. Many Metro riders feel we are “paying more for less” since WMATA implemented changes such as price increases, less frequent transit, and an end to late night trains.

Starting on June 26, 2017, Metro bus fares increased from $1.75 to $2.00. Metro rail added a $.10 fare increase during peak hours and $.25 during off-peak hours. Metro has also eliminated or reduced 33 travel routes in the entire DMV area, and cut 25% of Metro rail service during rush hour. When Metro outlined these changes in their budget and service changes, they failed to recognize how these changes will negatively affect thousands of people.

In addition to these flaws in the Metro bus and rail system, Metro Access, a privately contracted van service that provides transportation to disabled people in the District, has continued to disappoint riders. At the rally on June 29, ONE DC member Ms. Jourgette Reid-Sillah explained how Metro Access ensures that they make the maximum profit by taking longer routes and waiting past the 30-minute wait time, proving how they value “profits over people.” She points how this service exists because of a law requiring transportation services for those with disabilities, not “out of the goodness of their hearts.” Once again, Metro will do what they have to do in any given situation to capitalize off of those who use their services out of necessity, making it clear that WMATA’s main agenda is to maximize profit for private companies, rather than provide safe, accessible transportation for those of us who need it.

Moving forward, this fight doesn’t stop with the Transit Rally. The Save Our System Coalition continues to fight for transit justice by calling the community to action. If you wish to support, here are a few things you can do to help: