Homes for All Assembly Report-back

Between July 18th and 22nd, ONE DC members Keisha Harden, Janice Underwood, and myself attended the Homes for All Assembly convened by the Right to the City Alliance in Atlanta. The assembly brought housing justice organizers together from across the country to discuss housing challenges, share solutions, and plan how to react to those challenges nationally and regionally. The assembly was also an opportunity to introduce attendees to and invite comment on a training tool that includes a blueprint for building a grassroots group and an articulation of shared values. The ONE DC delegation was able to establish ties with groups working in nearby cities like Baltimore, Philadelphia, and Newark, and to strengthen ties with folks from D.C. that we were already familiar with. 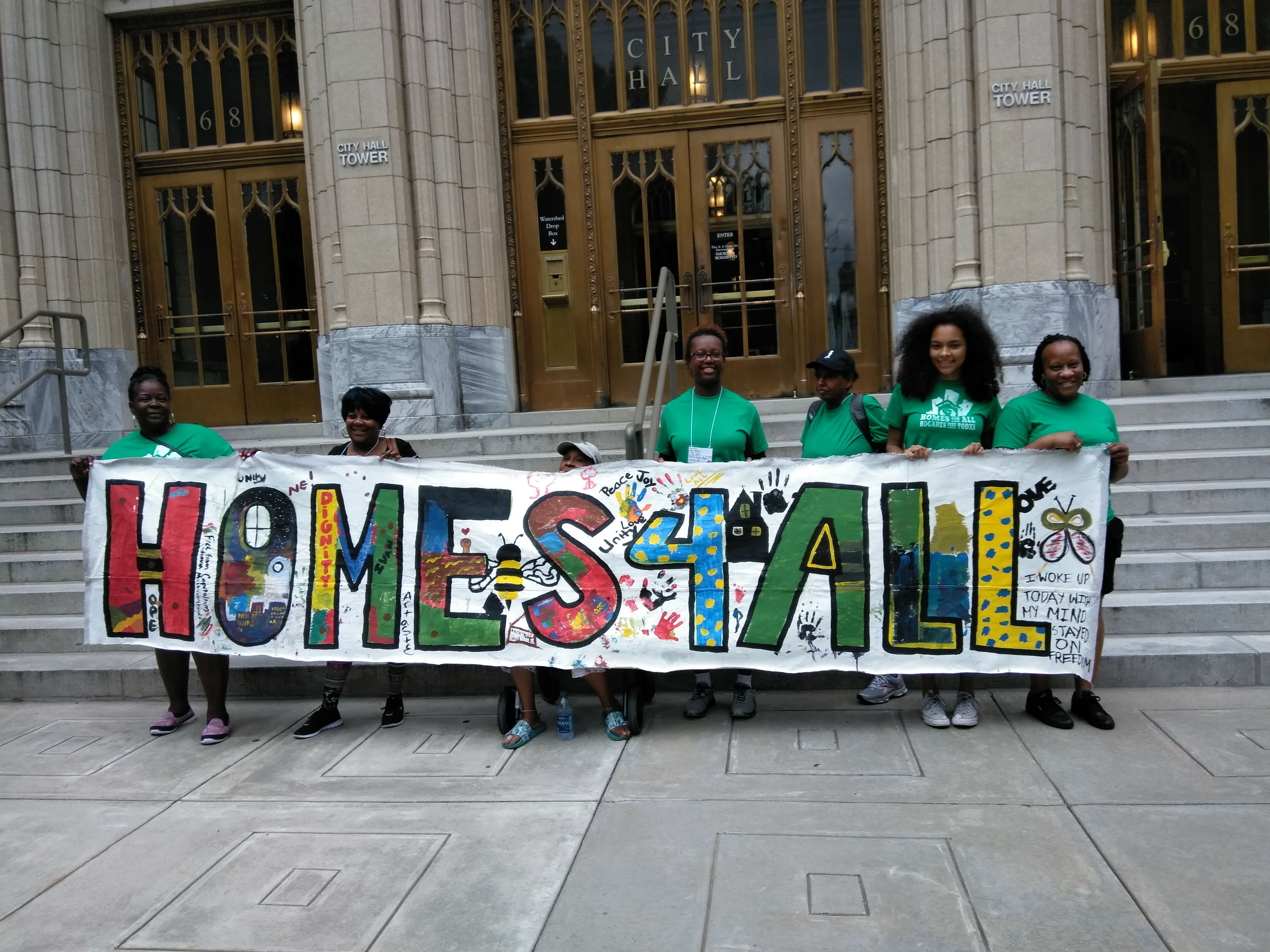 The first full day of the conference was spent discussing the current state of our housing work and collectively planning what we would need to do over the course of the next decade to achieve our goals. Despite the fact that the group included people from east, west, north and south, many of the problems they faced were surprisingly familiar. Low-income communities of color face displacement fueled by commercial and residential real estate development not only in cities that have been earning reputations as expensive places to live like DC, New York and the Bay Area, but also in places like Lincoln, Nebraska; Albuquerque, New Mexico; and Nashville, Tennessee.

The solutions they are seeking to implement are familiar too; just cause eviction, right to counsel, tenant opportunity to purchase, and rent control. Even though these tenant protections have not solved all of the problems facing tenants in cities where they exist – such as the District of Columbia – tenants’ rights would be a lot more elusive without them. It was inspiring to hear about serious campaigns to pursue them in so many places. If tenant protections become common outside of DC it will be easier to push for even stronger protections in DC. Folks were serious about what it would take to accomplish these things, as much of the plan for the next ten years included spending a lot of time door knocking, making phone calls, recruiting members, building coalitions and raising funding.

The second day of the conference was about what it would take operationally to achieve the plans that were laid out the day before. Appropriately the day began with a direct action because after we do the work of bringing people together, disrupting the status quo with protest is important to bring about change. However, the rest of the day was spent discussing the less glamorous work of building a group that can fight for housing justice in a meaningful way. To that end, the Right to the City Alliance introduced the Homes for All Handbook, movement DNA. It is a pamphlet with a dozen or so pages that lays out the shared values of the Homes for All Coalition along with step by step instructions on how to build a group. The techniques reminded me of what I had learned as an organizer at ACORN and New York Communities for Change and they were packaged in an inviting and digestible fashion. The Homes for All Handbook has the potential to be an invaluable tool for new organizers and tenant leaders.

On the third day, everybody attended a training session. The one I decided to attend was about development without displacement and community control. We participated in an exercise where we imagined that we were planning our ideal community and the facilitators would approach us and try to offer us things that would ‘improve’ our communities – we’d have to think about the consequences and reject or accept the offers. It was a great exercise. After that, we heard about how one Bay Area community group teamed up with a community development corporation to successfully fight for an alternative vision of development in their community.

All in all, the conference was a great experience. We were able to deepen our ties with other DC organizers, networks with other organizers in the region, do some reflection on our work in recent years and begin planning the future. The other ONE DC members and I left Atlanta inspired and anxious to continue building at home.

Share
right to housing coalition building homes for all