Elections for the People

By Ericka Taylor, DC Fair Elections Coalition
After a multi-year campaign, on March 13, 2018, the Fair Elections Act of 2017, designed to empower small donors and democratize the city’s electoral system, officially became law. The legislation establishes a voluntary public-financing system that will match small donations, allowing candidates to focus on meeting with their constituents instead of having to dial for dollars from developers, wealthy donors, and big corporations. Thanks to a 5:1 matching system, someone who can only afford to give $25 is making, with the match, a $150 donation. This means that working families and people of color will not only be better able to participate in the political system as donors, but they’ll face fewer financial barriers to running for office. 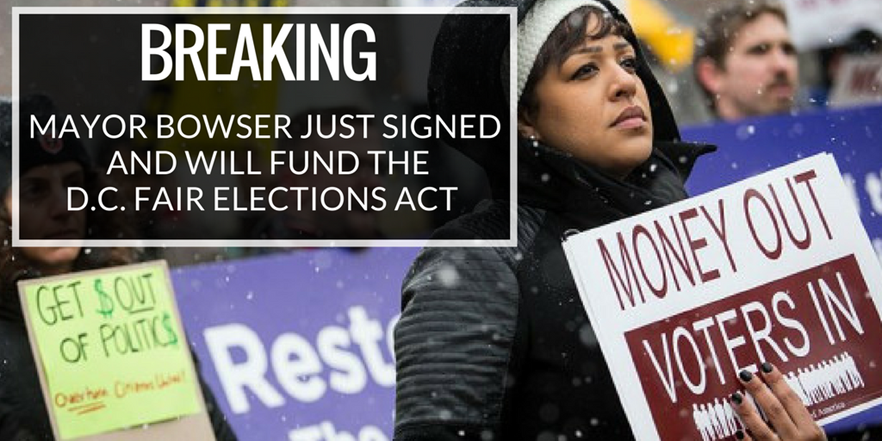 With the passage of fair elections, we can begin correcting the current imbalance among DC donors, who are in no way representative of the city’s population. Historically, these donors have been wealthier, whiter, and more male than the city as a whole, which gives candidates a skewed view of local priorities. The fact that only a quarter of the city’s adults make more than $100,000 a year, but 61% of mayoral donors and 59% of council donors do, indicates a problem with our democracy. The fact that 62% of mayoral donors and 67% of council donors are white, but white people only make up 37% of the population, shows that we’re not reaching our democratic ideals. Fair elections, which candidates can begin using in 2020, should upend those statistics.

Although the mayor signed the legislation after the council approved it with a unanimous vote, the path to victory was far from short and easy. An earlier effort failed several years ago, and the Fair Elections Coalition began working on the campaign in 2015, when passage was far from a certainty. Furthermore, the mayor publicly articulated disinterest in signing the legislation multiple times. The diligent work of coalition members to show grassroots support made a significant difference.

In addition to ONE DC, DC for Democracy, Fair Budget Coalition, DC Working Families, Demos, DC Sierra Club, Public Citizen, and US PIRG, dozens of other organizations pitched in, helping gather over 5,000 petitions from residents in every ward. Coalition members also delivered to the mayor a letter of support signed by more than 80 community leaders across the city. With the mayor including the initial funding for the law in the city’s next budget, the city is well on its way to right-sizing our democracy. You can find more about the legislation and how it works here.