Black workers are one of the primary social forces in the Black Liberation Movement in the US. Historically and today, they experience racism on the job, in labor unions, and the most negative effects of ‘neoliberal globalization.’ At several points throughout their history, Black workers have analyzed their own conditions and concluded self-organization was key to gaining power over their own lives. In the tradition of autonomous Black worker organizing, the 2nd annual Black Workers Center (BWC) National Convening met on November 12-14 in Oakland, CA to strategize for Black Workers Power. The theme of the convening was “Black Freedom Dreams.”

The history and current conditions of Black people demonstrate the necessity of spaces like BWCs where Black workers can conduct popular education, organize campaigns, and create Black worker-owned cooperatives. The exploitation of Black workers and the ideological justification to maintain control of their labor is foundational to the US settler colonial project. In a workshop titled “Black Worker Centers Meet Organized Labor” respected labor organizer Bill Fletcher discussed how Black radicals and anti-racist Whites were excluded from the newly formed AFL-CIO in 1955 due to segregation in the labor movement and McCarthyism. Around the same time in 1951, Black workers created the National Negro Labor Council to fight job discrimination, racism in labor unions, and build what we today call Black Workers Power. 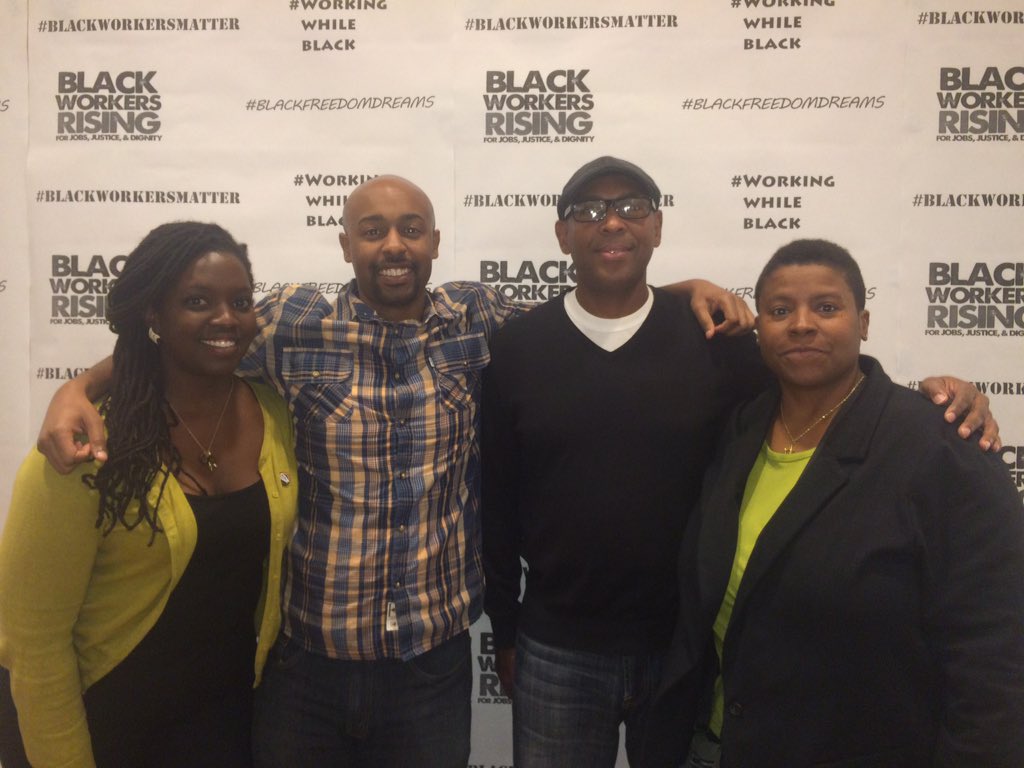 BWCs are slowly proving themselves to be spaces where Black workers can organize for power to overcome structural inequalities such as having twice the white unemployment rate, receiving 60% the white income, and Black median wealth 20 times less than that of whites. For example, the inaugural BWC in Los Angeles, in coalition with community groups, organized to win a project labor agreement (PLA) that requires 40% of workers hired onto Metro Construction projects come from ‘disadvantaged areas.’ The convening allowed all of us to compare notes and learn from each other so that we can infuse the concerns of Black workers into the emergent Movement for Black Lives.

A few months ago a report and hashtag called #BlackWorkersMatter was created in order to highlight the numerous challenges confronting Black labor in the context of #BlackLivesMatter. At the National Convening, a presentation called “A Glimpse at the Moment” by Bill Fletcher discussed ‘neoliberal globalization’ as one of the fundamental issues impacting Black workers. He described it as “a transformation in the regime of capitalism placing more emphasis on deregulation, privatization, subcontracting, casualization, and anti-unionism. It emphasizes the elimination of trade barriers and the unrestricted flow of capital.” This process comes in the form of relocation of industry away from large concentrations of Black folk or privatization of the public sector. Manufacturing and the public sector were two sectors where Black people traditionally could attain upward mobility.

Furthermore, over 50 years ago, radical Black worker James Boggs identified automation as a major threat to Black working people. This is why Kali Akuno, in an article called “Until We Win,” asserted that in US society the value of Black life is connected to how much profit we produce for the capitalists. In short, in the era of ‘neoliberal globalization,’ Black Lives don’t matter because unlike in the period of chattel slavery or segregation, Black labor produces less profits. The importance of self-organization and advancing our own initiatives could never be greater.

Steven Pitts, the founder of the National BWC project, presented a new National campaign that will be promoted by BWCs across the country called Working While Black. The title is a play on the common refrains ‘driving while Black’ or ‘walking while Black.' Central to the initiative is building coalitions or united fronts on local and national campaigns. The current approach of most US labor unions is business unionism or a narrow focus on gaining better wages or benefits. The initiative rejects this restrictive approach in favor of social justice unionism wherein workers organize around wider human rights issues such as mass incarceration, reproductive justice, and more. Black workers, like all workers, problems extend outside of the workplace and into their communities and day-to-day lives. BWCs have the potential to begin the process of building Black Workers Power in the work place and wider community so that we can confidently say that BlackLivesMatter AND BlackWorkersMatter.