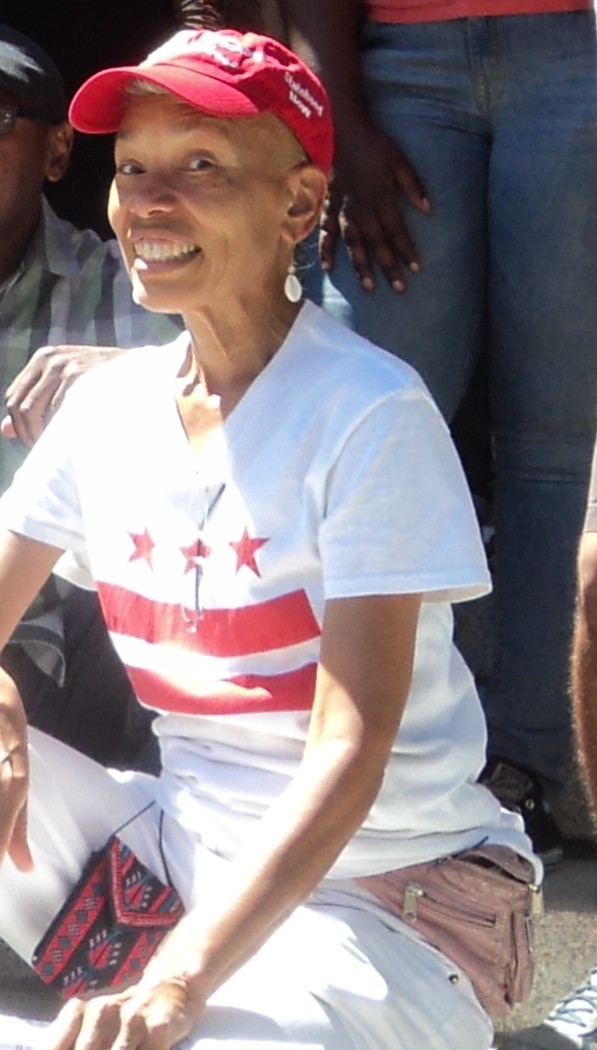 Over the weekend, we sat down with Luci Murphy as a part of our ONE DC Member Spotlight feature. We met at Lamont Park in Mt. Pleasant, which was soon to be the site of the annual Dia De Los Muertos or Day of the Dead celebration with Luci slated to perform later that day. Together we discussed her thoughts on ONE DC, politics, and the unique importance of music.

ONE DC: Before we get started, I see everyone is setting up for an event. What is it? Are you performing today?
Luci: Mmhmm! Its the Day of the Dead. The tradition is that people build an altar and bring photographs of their deceased loved ones, put them on the alter, and remember them. It's a day of remembrance. We'll have music and poetry. We usually do a little parade a few blocks through the neighborhood to remind everybody.

ONE DC: You have a rich history with ONE DC stretching back 10 years. Could you briefly state what attracted you to the organization in the beginning and what motivates you to still be an active member?
Luci: The issues. The issues of housing and jobs. These are issues that we still have not resolved. There's a lot of dislocation. I remember when my aunt lived in a substantial house in the 60s and the price on it was 25,000. The same house is probably three quarters of a million now. How to you do that? People's salaries aren't changing. What is this?

ONE DC: What is it about ONE DC's approach to organizing that you like?
Luci: The emphasis on co-ops. Studying co-ops and preparing people to build co-ops!

ONE DC: Last month you performed at the Renter's Day of Action. What inspired your performance? What did you want people to take away?
Luci: We have a lot of vacant buildings in Washington, DC and then we have our homeless. Why can't we get these two together?

ONE DC: When do you think it'll begin meeting?
Luci: It'll be after December 3rd.

ONE DC: And if someone is interested in joining?
Luci: Call me! People are scared to call me! They know I'm going to give them something to do!

ONE DC: As a performer, music and art are an essential dynamic in your activism. Who's work, either artistic or political, inspires you?
Luci: I grew up with some very activist congregations -- St. Stephen's and the Incarnation. And because I was a member of St. Stephen's, I met a woman, an older lady from Mississippi who embodied the tradition. She played three chords on the guitar but she played them in a hell of a way! She got people to sing along with her. She had something called Mother Scott and her children and I was one of her children. The pastor would take us to city council hearings and she would sing to make a point and of course that would make the news. Not everyone comes to a city council hearing with a guitar prepared to sing!

ONE DC: There's something special about music, especially call-and-response, that can bring people together. What do you find unique about it?
Luci: It works!

ONE DC: Music and Art have always played a fundamental role in the struggle for justice, emancipation, and equality. Outside of the feeling of solidarity when performing music, how else do you see music contributing to the struggle for justice?
Luci: We didn't have the SNCC freedom singers here but we had their recordings. We were able to use them.

ONE DC: American University was hosting a panel and an art gallery to honor the work of Emory Douglas. They were discussing the power and importance of his work and the way he could communicate very complicated messages in a very simple way thereby reaching a wide variety of people. Do you feel that music shares this quality?
Luci: Absolutely! I think music is actually more social because more people can participate. The creation of visual art is a very solitary process whereas music is a social process.

ONE DC: You mentioned there's more participation in music not only in a call-and-response but people are also free to riff on music anyway they want to at any time they want to through rhythm, clapping, vocalization, improvisation, etc.
Luci: Fredrick Douglas KirkPatrick said that it used to be that anybody could sing a song or pray a prayer but now its gotten so complicated. We only have specialists doing these things and we're lost in this specialization.

ONE DC: This kinda goes back to politics where the only people to be respected are the specialists.
Luci: Our Chorus is singing a song called 'You can dance, you can sing' taken from a proverb from Zimbabwe, which has been translated as 'If you can walk, you can dance; if you can talk, you can sing' but thats really a message for us in the United States. What the actual song says is if you can dance, dance, if you can sing, sing! You know, like do it! Everyone in Zimbabwe can dance and sing and nobody's embarrassed. That is part of what you do as a member of a community whereas here if you don't move just right you may get criticized and if you're self-conscious you may decide not to participate.

ONE DC: Similarly, there are now specific places to do it. The community aspect is being pushed out. The only way to access it is by joining a club that you have to pay for or renting a space to play in.
Luci: And I see some of the singing and music playing has become commercialized: "If you pay such and such an amount you can play as a part of this jazz group we are starting."

ONE DC: You should be able to just pick up and play. That's just what you do.
Luci: But somebody has just rented some space and has decided that they're going to get some people to pay for their time. That shouldn't be the only way that culture survives.

ONE DC: All across the country people are facing dispossession and displacement at the hands of the ruling class for profit. From the District to North Dakota neoliberal capitalism is violating people's right to housing and land. Even more, resistance is often met with brutal state violence and repression. How do you think people should go about building solidarity with one another, especially when you are economically contributing to those forces, willingly or unwillingly?

ONE DC: How do you get an apology without allowing Empire to bury these issues as something that's happened only 'in the past'?
Luci: We have to build consciousness and right now folks are very unconscious. They are having poisonous television, poisonous food, poisonous water, and poisonous air thrown at them all the time. Well, how can they get conscious? We've got to build a movement. A movement that has to educate, energize, and encourage folks.

To contact Luci about the Black Workers Center Chorus you can find her Facebook page here or call her at 202.234.8840.