Two days after Christmas, on December 27, 2017, real estate developer and slumlord Geoff Griffis cut a back door deal with long-time partner and fellow slumlord Sanford Capital in an attempt to acquire their properties at Congress Heights, via an irregular and possibly illegal land transfer. This attempted transfer is a desperate and last minute move by Griffis to circumvent two Court orders that would have otherwise resulted in either a negotiated agreement with Congress Heights tenants to prevent displacement and jump start the building of 200 units of affordable housing, or, a $2 million payment to the court to be used to repair the property as part of the ongoing receivership action.

This shameless attempted transfer of property from Sanford Capital to Geoff Griffis also took place during a 60-day period within which the court ordered Sanford Capital to negotiate exclusively with Congress Heights tenants via their chosen non-profit developer, NHT (National Housing Trust). In response to this latest maneuver by Geoff Griffis, Attorney General Karl Racine filed a contempt motion against Griffis in an effort to expose the underhanded nature of this latest displacement tactic.

To be clear: Griffis's intent is to stop money from being paid to the court by Sanford Capital (his partner), thus preventing desperately needed repairs that would protect the health and well-being of Congress Heights tenants. Moreover, the move is designed to prevent tenants from being able to exercise their rights under the Tenant Opportunity to Purchase Act (TOPA), thus depriving them the opportunity to take control of the redevelopment process for themselves.

This usurping of tenant rights in the midst of an affordable housing crisis prevents tenants from doing exactly what TOPA was designed for, namely, giving the tenants a legal tool to prevent their own displacement, and also, to preserve and expand affordable housing in their own community.

Geoff Griffis is willing to subject Congress Heights tenants to continued unsafe, unhealthy conditions in order to push forward a luxury development plan at the expense of community interests. However, Congress Heights tenants are in the midst of fighting back. Their legal team, including Arnold & Porter and the Washington Legal Clinic for the Homeless, is actively working to dispute Griffis's attempts to circumvent TOPA and the receivership.

Justice First and ONE DC are gearing up for mass mobilization in support of affordable housing and against displacement at Congress Heights. Tenants have worked for four years in order to control the land in their community. This is a line in the sand and a battle that cannot be lost. Join us at noon on Saturday, February 10 as we march on the home of slumlord Geoff Griffis! 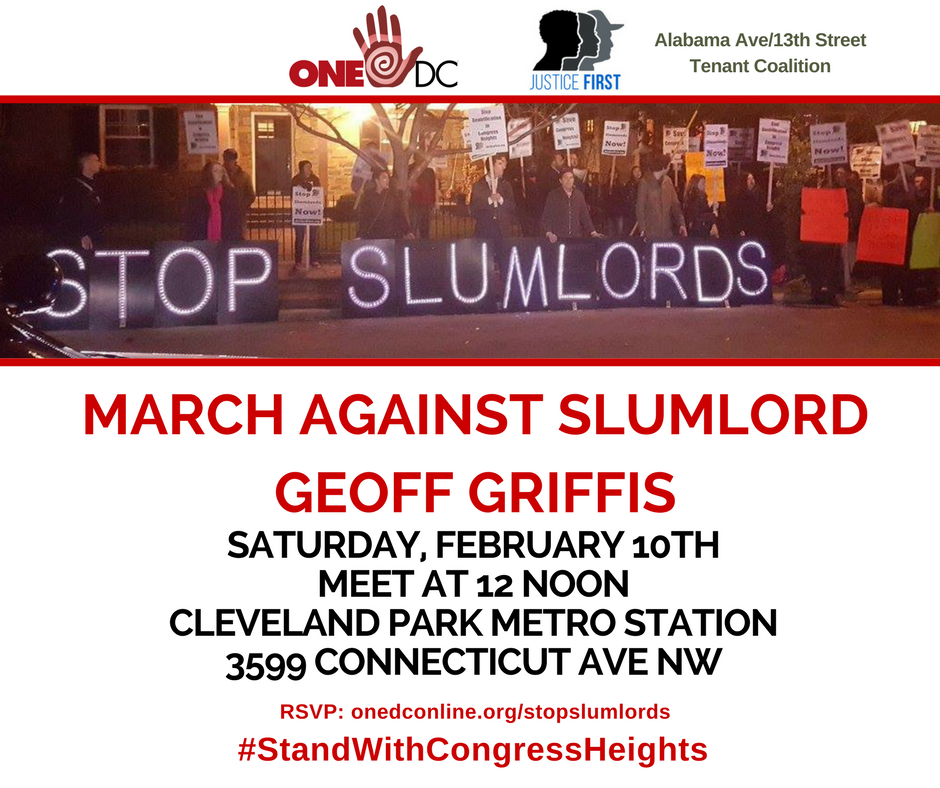 In a New Great Depression, we need a new JUBILEE