Join OUR DC and Good Jobs Nation at a rally and press conference tomorrow to highlight the plight of low-wage federal contract workers who are calling on the President to do more than the minimum, and issue a Good Jobs Executive Order (read about it in the Washington Post).

TUESDAY, JULY 29 at 9am, UNION STATION

Hundreds of Good Jobs Nation workers will gather to declare that the President’s $10.10 Executive Order is a great first step, but it's not enough to lift them out of poverty.   These workers need more than the minimum – they need a Good Jobs Executive Order that makes sure federal contractors respect collective bargaining rights, pay living wages and benefits, stop wage theft, and don’t pay CEOs excessive salaries.

WHERE:  Columbus Circle, in front of Union Station

"Angela Glover Blackwell set the tone in her keynote address when she called for a new national narrative on community development; one based on current demographic and economic realities, not just morality. [...] Recognizing the continuing racial and class segregation of cities she focused a laser on the significance of place in shaping the nation’s opportunity structure. She reminded the group how neighborhood determines [...] virtually all aspects of the quality of life, including life expectancy itself."

Our Streets: An Exhibition of Collected Stories 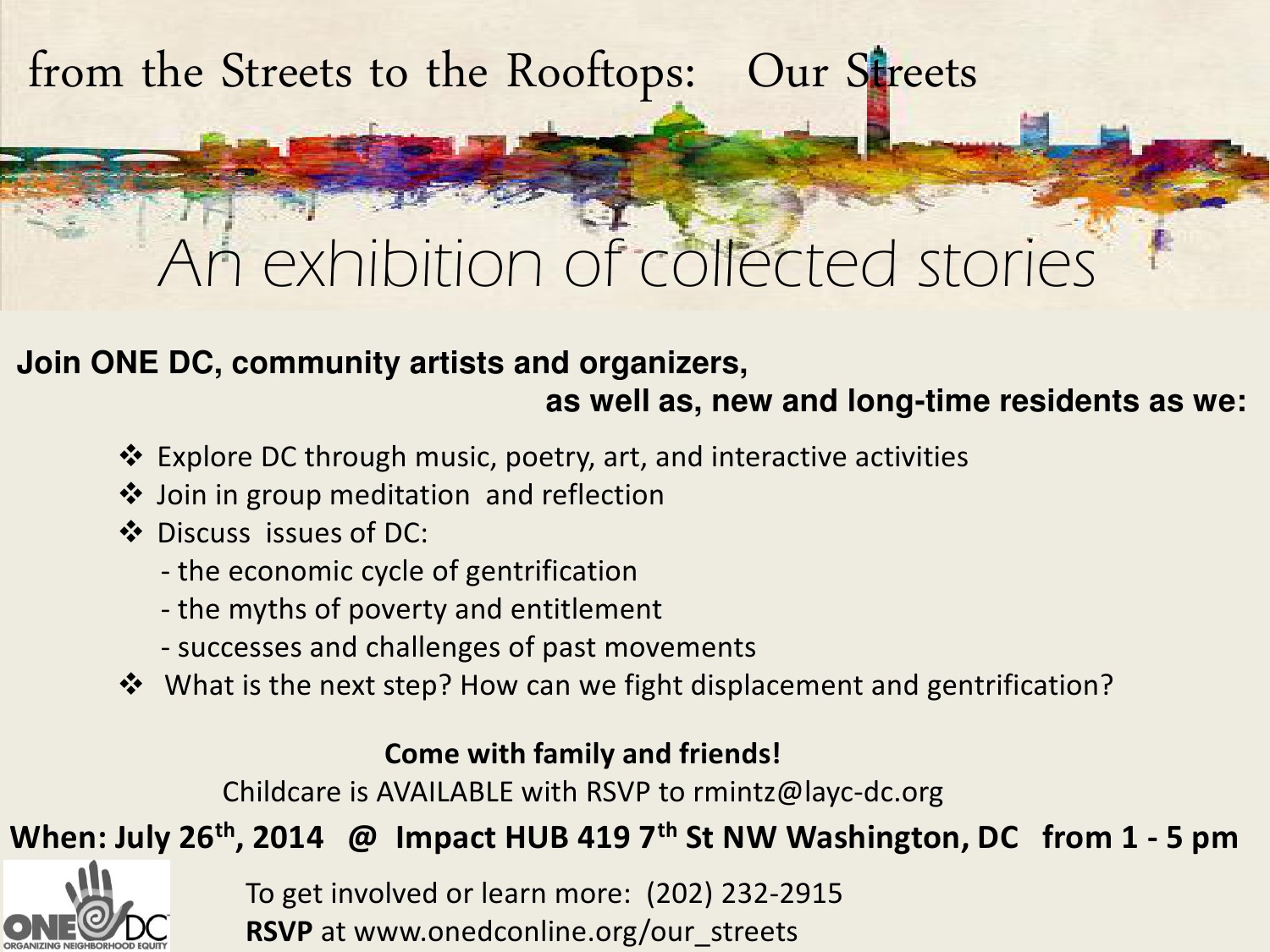 RSVP here for the July Right to Income Meeting 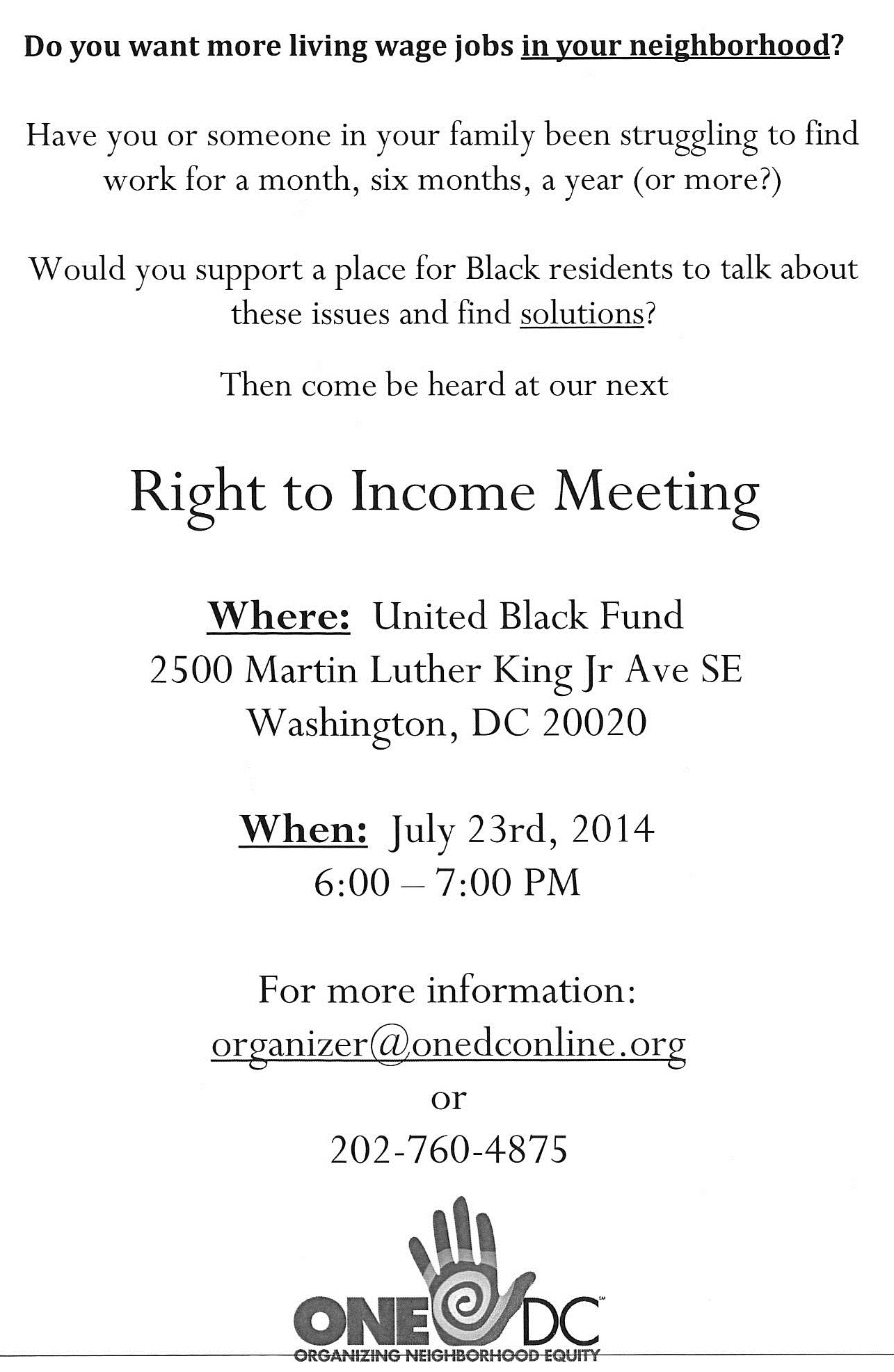 Check out the blog of a movement trying to save Museum Square, a building whose demolition would displace low-income Chinese residents in China town.

"In early June of this year, tenants of Museum Square, a 302-unit Section 8 affordable apartment building in Chinatown, received a notice which revealed the owner’s plans to demolish the building. Tenants were told that they can only save their homes if they can raise $250 million to buy the building. [...] That price works out to just over $827,800 per unit; a completely unrealistic price for this building which is 7 times higher than the $36 million assessed value of the property. [...]

Museum Square represents one of two buildings still home to low-income tenants in this area of the city, and 302 rental units that are at risk of being permanently lost from DC’s stock of affordable housing. And ironically this future development seeks to demolish a building that currently houses the majority of the Chinese residents left in that neighborhood, ultimately so that disproportionately white and higher income people can live in Chinatown. Tenants are working tirelessly to fight for the preservation of their homes and the affordability of this building by any means available." 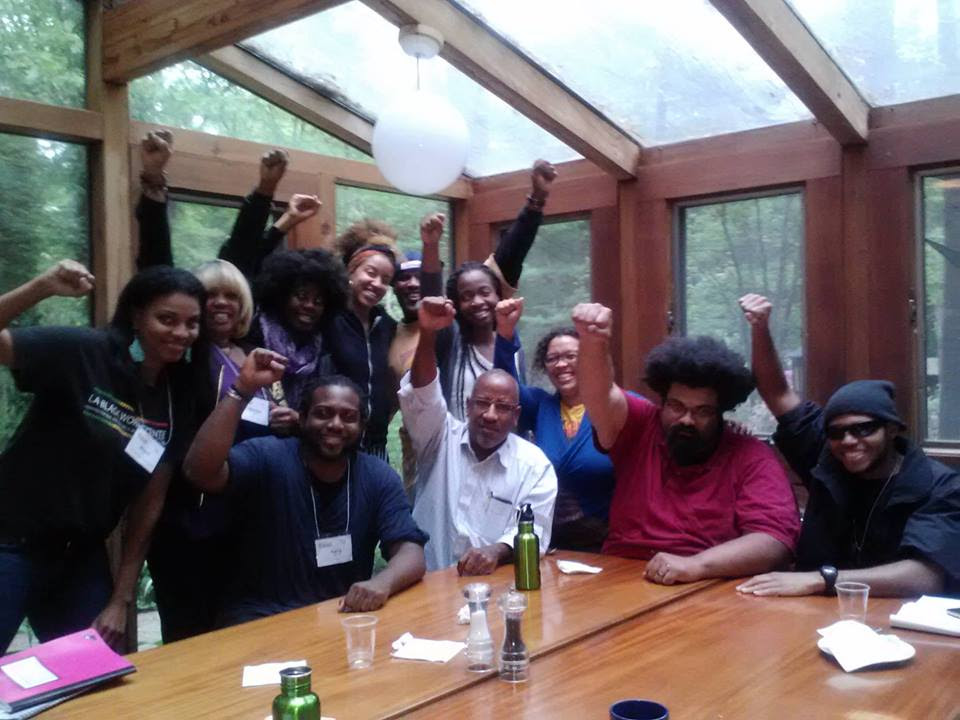 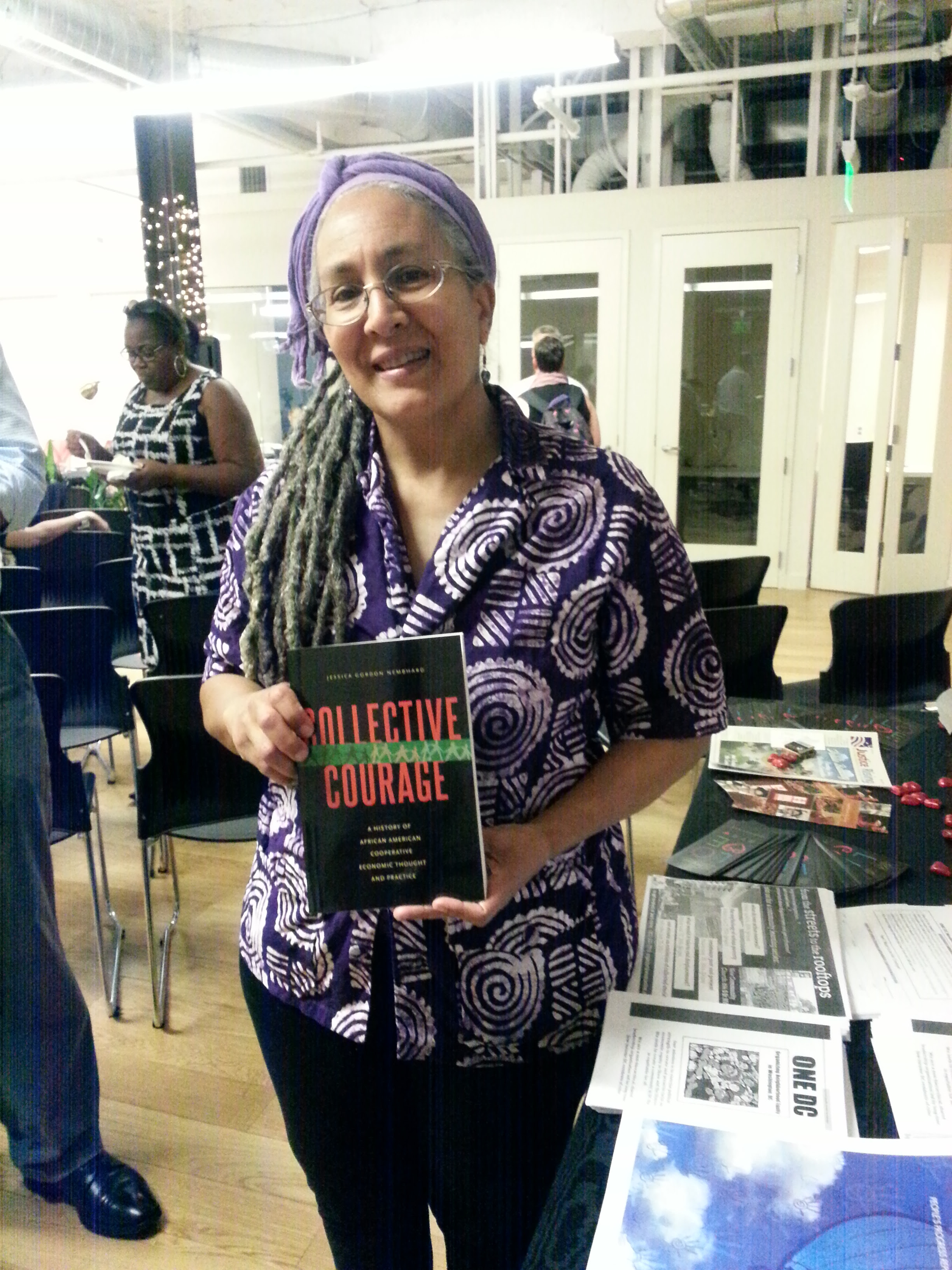 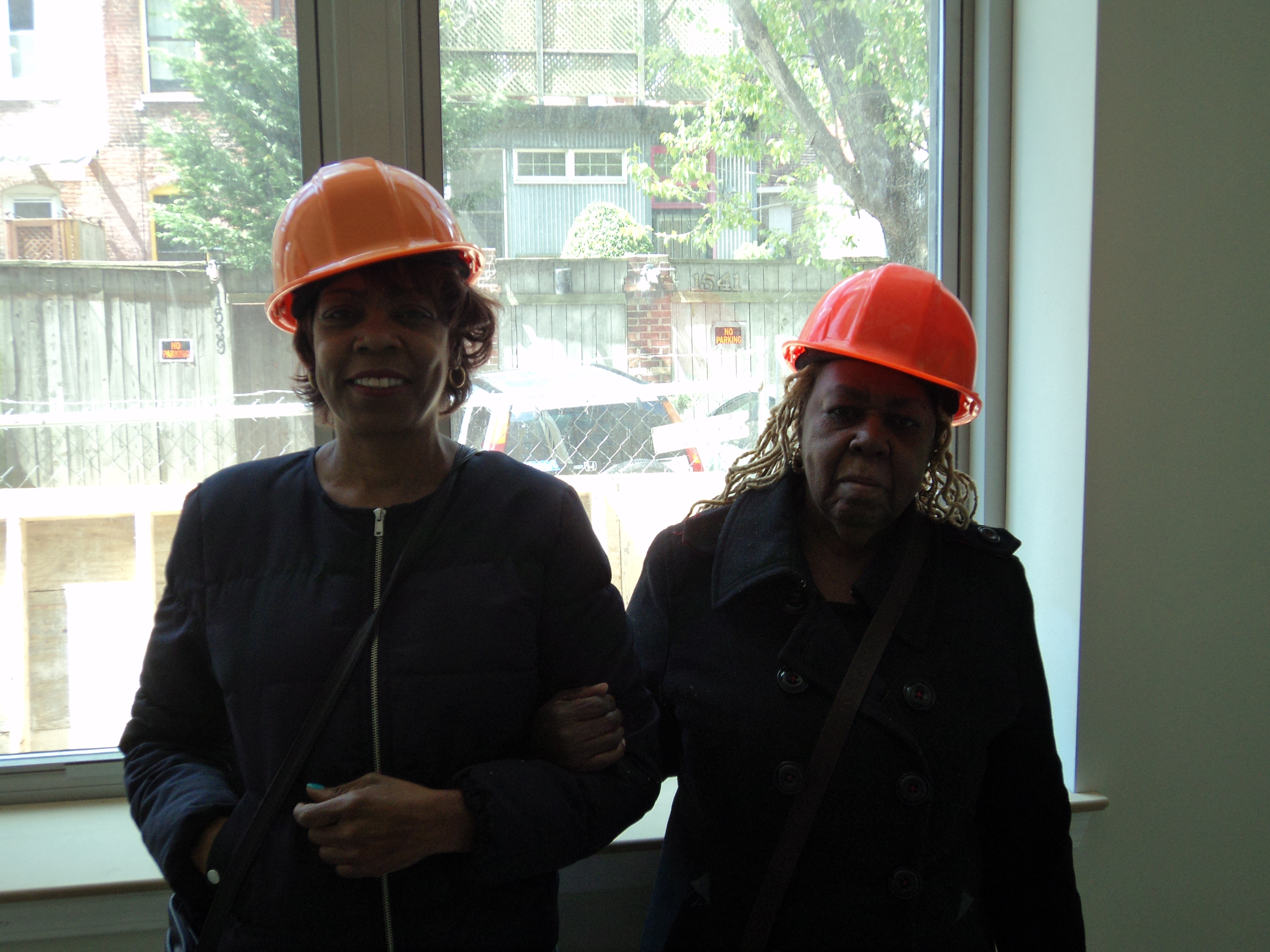 The first Kelsey Garden tenants are excited and planning to move back to their Shaw neighborhood in the fall of 2014. It has been eight years of struggle and adjustment for Kelsey Garden tenants who were displaced from their 54 unit garden style apartment complex at 7th & Q Streets NW in the Shaw neighborhood. Their roomy garden style apartments with balconies have been replaced by a new development, Jefferson Marketplace, an eight story, 281 unit apartment building. The Kelsey Garden Tenant Association scored a major victory when they challenged the sale of their building and the tactics owners used to force residents from their homes.

In the 2006 Settlement Agreement, the Kelsey Garden Tenant Association won the right to return to 54 units constructed in the same mix of one, two, three and four bedroom units in the new development for 50 years. With ONE DC as their tenant representative, we have worked to challenge excessive fees, maintain the sense of community among the tenants, and ensure the tenants have legal representation. 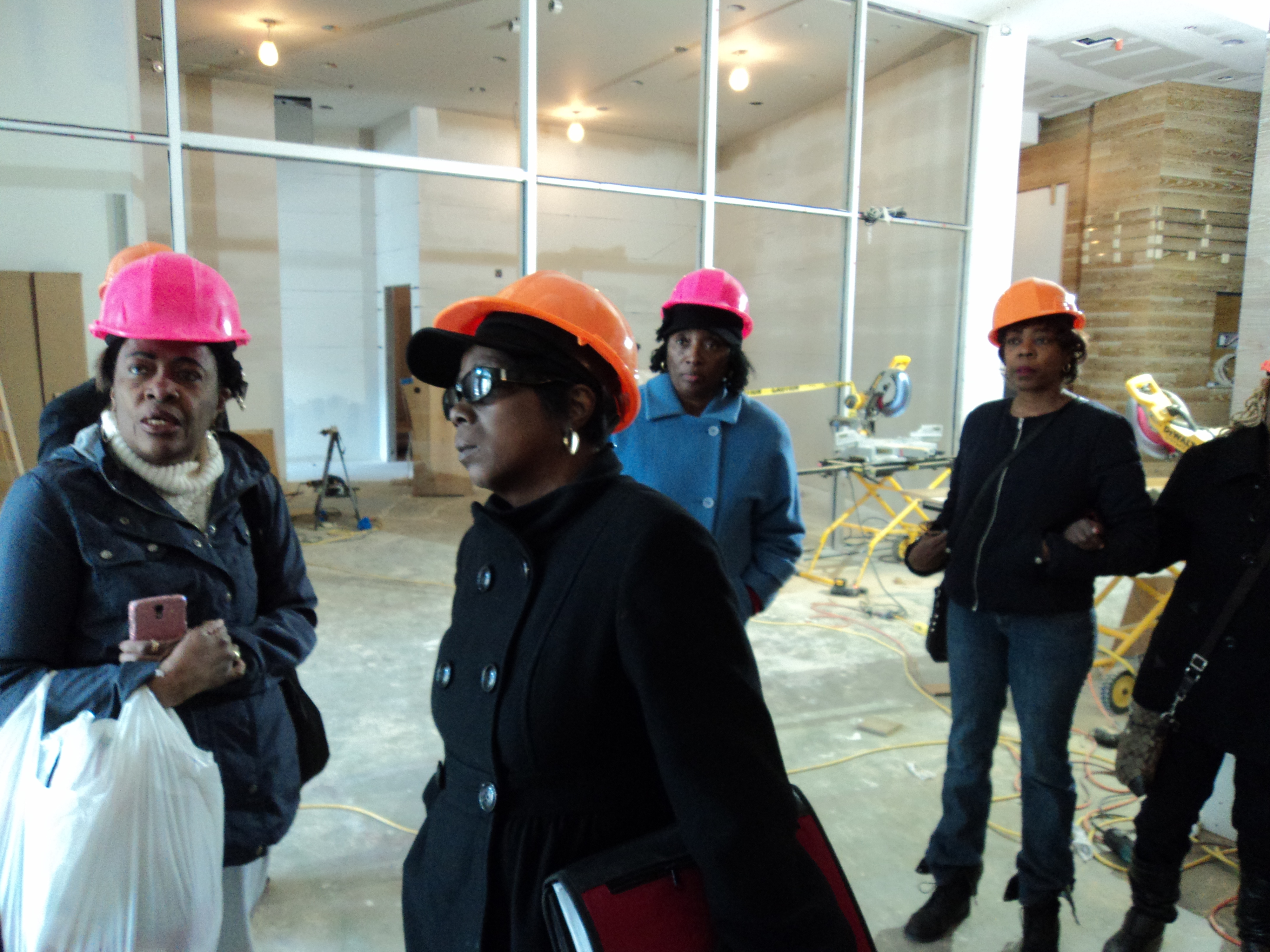 Over the summer months, final preparations will be made to ensure tenants are able to celebrate and move into the new building in the fall of 2014.

What Would It Take to End Displacement?

For the past three months, ONE DC has been organizing a series of community learning forums called “From the Streets to the Rooftops” to bring together long-time residents as well as newcomers to DC to develop a shared analysis of the processes of gentrification and displacement that are affecting our neighborhoods.

In the first session, we learned about the structural forces driving displacement, focusing on how systematic disinvestment in low income communities of color intensifies poverty while creating opportunities for developers, banks, and other real estate interests to make big profits by buying up cheap land, building expensive housing, and marketing it to wealthier residents. Next, we studied the mythology that drives and justifies the displacement of long-time residents of DC and other cities. We discussed how politicians and academics have masked the problem of poverty, discrimination, and disinvestment in communities of color by pathologizing “concentrated poverty.” When the public is convinced that the city’s main problems result from too many poor people living together, displacing those people and bringing in new, affluent, whiter residents can be treated as the solution.

In our most recent session, we began to study the ways that communities have come together to resist displacement. We brought together a panel of organizers of six community leaders and organizers from DC and Baltimore to draw lessons from fights to preserve public housing, ensure that long-time residents have the right to return when their homes are redeveloped, hold landlords accountable to their tenants, and ensure that our city’s “redevelopment” and “revitalization” plans remain inclusive.

And we’re not done yet. Join ONE DC, community artists, organizers, new and longtime residents on Saturday, July 26th as we explore the cultural diversity of DC through music, poetry, art, and interactive activities. Join in the group meditation and reflection, and participate in discussions around topics of local concern which include the economic cycle of gentrification, the myths of poverty and entitlement, and the successes and challenges of past movements. As we celebrate our shared human experiences and our cultural diversity simultaneously, we will explore the next steps to fight gentrification and the displacement of communities.

From the start of the planning committee, GW’s Center for Civic Engagement and Public Service (CCEPS) was excited to have the opportunity to partner with a strong, substantive, community-based organization like ONE DC. The collaboration between Gregory Squires (GW) and Dominic Moulden (ONE DC) in writing the social policy article entitled “Equitable Development Comes to DC” truly initiated a great start. The symposium that occurred on Thursday, March 27, 2014 brought about 120 participants.

It was wonderful to have local residents and GW academic faculty and students all come together for this event. Each of them had the opportunity to learn from one another and grow in their networks. In regards to students, it is essential that they not only learn from books, but also from people within their field of study. In this way, they learn to value the knowledge that comes from the community members’ life experiences. This creates a greater sense of pride and connection between their major and the surrounding environment.

The planning committee consisted of the executive director from CCEPS (Amy Cohen), resource organizer from ONE DC (Dominic Moulden), GW sociology, public policy, and public administration professor (Dr. Gregory Squires), adjunct professor at American University (Kalfani Ture), and two GW student event coordinators (Leah Galasso and Bianca Valencia). They each played a critical role in determining the needs of the symposium and executing those plans. Specifically, it was absolutely great to work with Kalfani because of his involved nature with equitable development. In fact, he was an intern for ONE DC, and is currently a doctoral candidate of anthropology and an approaching faculty member.

As for the student coordinators, Leah and Bianca were both able to grow and develop new skills since working on the symposium. They both quickly realized that committee meetings were starkly different from a classroom environment. They also never worked in a participatory democracy before. However, after the readjustment period, both students were able to create their own mark and coordinate with each other in order to complete various tasks. By the end, they both became more confident in not only approaches of creating a large-scale event, but also in group collaboration.

Overall, the Equitable Development Symposium was a tremendous success. The hope is to make this event annual as to increase awareness and draw more networks to create solutions to the current problem. The Center for Civic Engagement and Public Service, as well as the GW community are more than excited to continue their partnership with ONE DC.