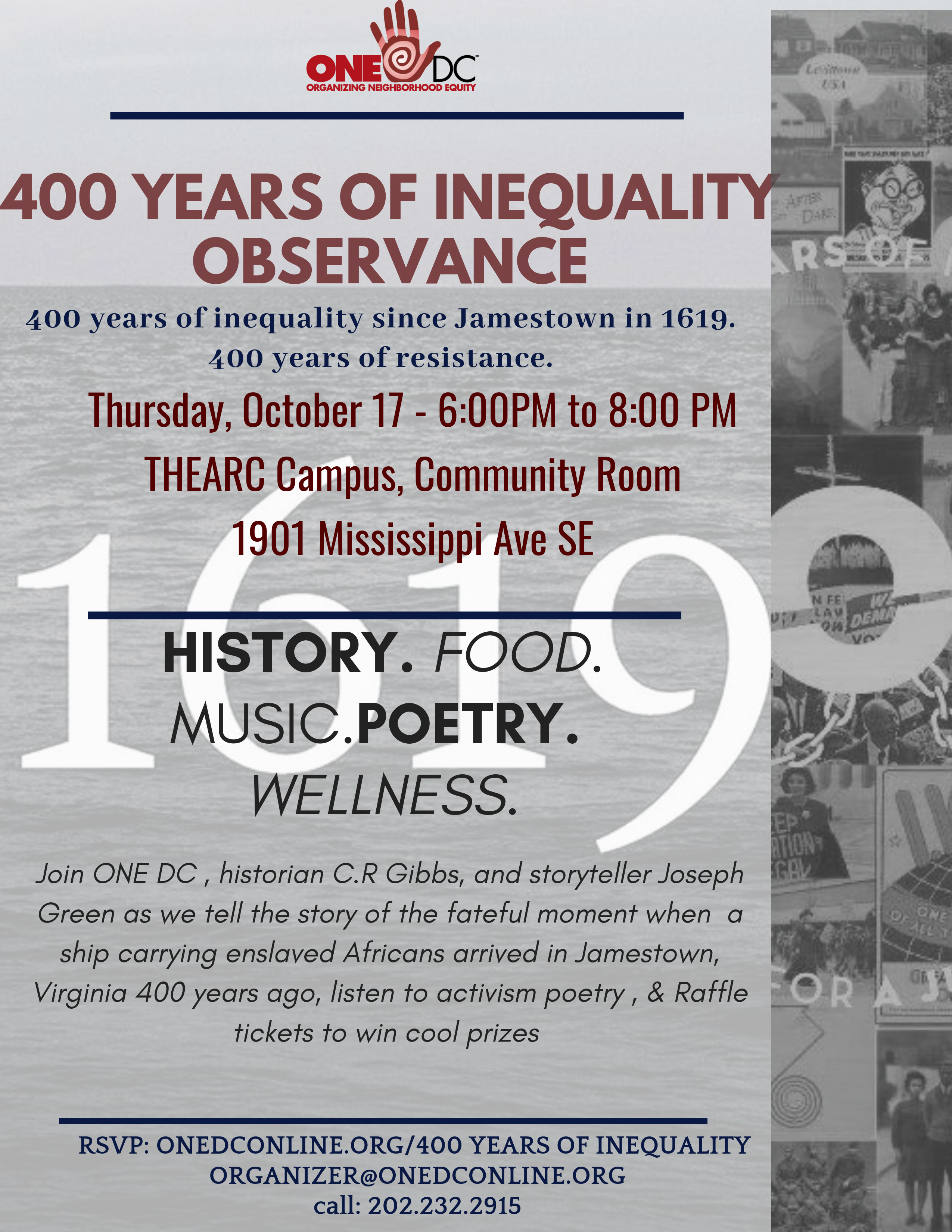 In 1619, Africans stepped foot on North American soil as indentured servants. They worked side by side with white Europeans in Jamestown, Virginia, and after completing their sentence, were free to settle across the Southern Colonies. The social codification of racial differences soon led to legal classifications of white Europeans as human, and Africans as property, not deserving of equal rights and privileges. Before the next century, their descendants were soon defined as Black, as “other,” sold into slavery, and forced into a life of subjugation and persecution.

The United States economy--prior to the Civil War--would not have thrived at the rate that it did without the exploited labor of enslaved Africans. According to Steven Minzt, American Historian, “By 1840, the South grew 60 percent of the world's cotton and provided some 70 percent of the cotton consumed by the British textile industry.” White economic growth was entirely based on the domination of African-Americans, and following the ratification of the 13th, 14th, and 15th Amendments to the US Constitution, white Americans continued to use every tool at their disposal to create a system of economic, social, and political inequality that benefitted themselves at the expense of Black people. The sharp disparities in wealth seen within the United States are a direct result of the that fact that the profits white property-owners gained through centuries of slavery and inequality have never been redistributed to those that directly contributed to formation of the country as a global superpower.

Currently, housing and income inequities continue to persist as a direct result of the continued dominance of racial capitalism, where Black people are viewed as less deserving of basic rights and quality access to necessities for life.

In a capitalist system, home ownership has long been the primary tool used to transfer wealth between generations. For white Americans, racism and discrimination in the mortgage lending and development industries have been used to their benefit. As long as land is devalued when primarily used by Black and Brown people, and as long as gentrification displaces these same people out of areas deemed as “up and coming,” the gap in wealth will continue to widen between people of color and whites. As long as racism still permeates the workforce, and as long as Black and Brown people make up the vast majority of low-wage workers in corporations that do not operate with equitable distribution of profits, income inequality will continue to rise.

ONE DC works to emphasize the importance of community-led and community-inspired alternatives to racism, capitalism, and inequality that work to uplift the individual for the benefit of all. ONE DC believes in the promise of community land trusts, housing community, and public housing as tools to make housing more equitable and just. Through worker-owned cooperatives, we believe that Black and Brown people can create their own alternatives to low-wage work that will help encourage income equality.

Although ONE DC is committed to fighting against the 400 years of inequality that has persisted in the United States since the first arrival of Africans at Jamestown, we would like to encourage those who fight alongside of us to continuously practice wellness. This includes taking steps to practice physical, mental, emotional, financial, environmental, and spiritual wellness. There are systematic efforts in place being used to prevent those who are disenfranchised from making wellness an active part of daily life. Food apartheid in Black and Brown communities, a dearth of accessible public recreational spaces, and a shortage of Black and Brown mental health professionals all contribute to an inability to regularly practice wellness. ONE DC creates practices of community wellness, so that we can begin healing ourselves and more fully dedicate ourselves to the fight against injustice.

400 years of inequality can and should only be followed by a lifetime commitment to building power with those who have been directly affected by subjugation and persecution. ONE DC is dedicated to uplifting the voices of long-time DC residents, working class people of color, LGBTQ people,  and immigrants, and will continue to fight for racial and economic equity.