Recently, Greater Greater Washington and the DC Smart Growth Coalition have asked the public to sign on with corporate developers and non-profit property managers to together push for “more housing” to be built in DC with less regulations holding them back.

The smart growthers consistently point to a mythical demand to support their call for more housing – that 1,000 people are moving into the city every month. They believe the city should help corporate developers meet this demand by giving them the right to build bigger and bigger condos and apartment complexes. On its face, this not-so-smart "build-baby-build" philosophy is failed civic policy in that it omits a key piece of the equation: EXISTING DC RESIDENTS, FAMILIES, AND BUSINESSES!

First, let's analyze the "smart" growth premise for more housing at any cost. They claim 1,000 people are moving into the city every month, but never point to any evidence showing this. More importantly, where is the associated statistic on how many people are being pushed out on a monthly basis? We certainly know for a fact that the rate of homelessness has jumped significantly over the past several years. This is a sure sign of displacement at a time when housing is popping up all over the city.

Also, when waving around the '1,000 people' mantra, the so-called smart growth philosophy dispenses with any analysis of who these people are and why they are moving into the city. Using the 2010 US Census, we have a sense that those moving into DC are largely single white professionals making relatively significant salaries ($50,000+), and are working at corporate / government entities. These entities, in turn, won't take the time or aren't offered the incentives to train and hire from the existing DC population.

Further, the "smart" growth demand that building more housing in the District will reduce the prices of housing for all is such a fundamental fallacy as to be a complete joke. Developers have built tens of thousands of new housing units over the last fifteen years -- the same amount of time that shows 40,000+ black folks have been displaced from the city.

Smart growthers and some city planners have recently settled that a $1,200/month studio/one bedroom can be considered “affordable.” This is in part because the displacement machine determines DC's affordability based on an Area Median Income (AMI) that includes two of the wealthiest places in the nation, Montgomery County in Maryland and Fairfax County in Virginia. This means the 2016 AMI is $108,000!  This rising polarity in those who have and those who don't is a result of corporate profit desires in conjunction with lack of government regulation directing us towards the predictable Smart Growth vision for our city – a haven for the uber wealthy only.

In 2017, DC's real estate market is tops in the nation with property deals reaching record highs and rents averaging a scorching $1,500 a month for a studio/one bedroom. However, even when the true advocates score a victory, the "smart" growthers attack us. For example, David Alpert of Greater Greater Washington condemned the people's recent McMillan Court decision supporting those who are fighting displacement.

McMillan Park is 25 acres of open public space with a national landmarked waterworks marvel underground. Located between 1st and Michigan NW, and Channing and North Capital NW, the Mayor (Fenty, Gray, and Bowser) have for years tried to shove in 600+ luxury housing units there. At the rubber stamp zoning hearings, key smart growthers were there to champion how great the project is. In approving the McMillan giveaway, the Mayor, Council, and Zoning Commission again failed to account for the EXISTING RESIDENTS and NEIGHBORHOODS around the park.

Click here for more on the McMillan Park legal battle

The McMillan Court affirmed very clearly that when these large luxury projects with abundant housing are proposed to be constructed in already established DC communities, DC officials MUST consider the subsequent land value destabilization brought on with the resultant displacement pressures.

The McMillan Court victory is a huge step forward in the legal and planning realms of the District for the longtime, existing DC families and peoples and communities that we, the true activists and organizers, want to preserve and protect. It is Greater Greater Washington and the DC Smart Growth Coalition who have shown their true colors, denouncing our victories with a mission for displacement driven by their supporters, the corporate development class, and compromised non-profits.

Ultimately, the people will have to organize on the ground with the help of groups like ONE DC to prevail over defunct and ignorant housing policies and failed planning actions that disregard existing longtime DC residents, families, and businesses.

Please warn your networks not to fall for 'dumb' policies that will ultimately lend to the displacement of our friends, family, and communities. Testify at upcoming hearings, write letters, protest, sit-in, and demand the planners meaningfully take into account the future of existing District peeps and working families. 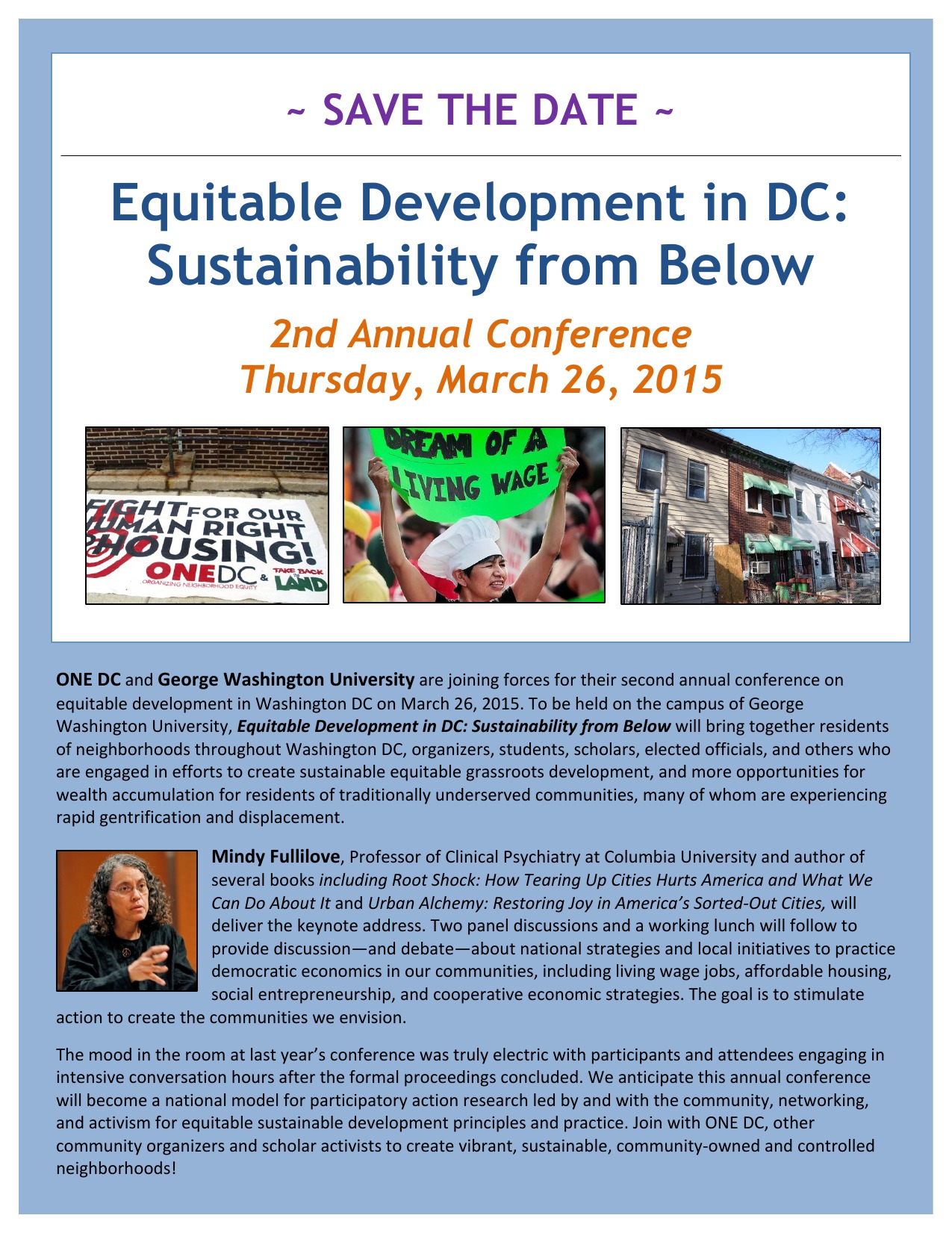 From the start of the planning committee, GW’s Center for Civic Engagement and Public Service (CCEPS) was excited to have the opportunity to partner with a strong, substantive, community-based organization like ONE DC. The collaboration between Gregory Squires (GW) and Dominic Moulden (ONE DC) in writing the social policy article entitled “Equitable Development Comes to DC” truly initiated a great start. The symposium that occurred on Thursday, March 27, 2014 brought about 120 participants.

It was wonderful to have local residents and GW academic faculty and students all come together for this event. Each of them had the opportunity to learn from one another and grow in their networks. In regards to students, it is essential that they not only learn from books, but also from people within their field of study. In this way, they learn to value the knowledge that comes from the community members’ life experiences. This creates a greater sense of pride and connection between their major and the surrounding environment.

The planning committee consisted of the executive director from CCEPS (Amy Cohen), resource organizer from ONE DC (Dominic Moulden), GW sociology, public policy, and public administration professor (Dr. Gregory Squires), adjunct professor at American University (Kalfani Ture), and two GW student event coordinators (Leah Galasso and Bianca Valencia). They each played a critical role in determining the needs of the symposium and executing those plans. Specifically, it was absolutely great to work with Kalfani because of his involved nature with equitable development. In fact, he was an intern for ONE DC, and is currently a doctoral candidate of anthropology and an approaching faculty member.

As for the student coordinators, Leah and Bianca were both able to grow and develop new skills since working on the symposium. They both quickly realized that committee meetings were starkly different from a classroom environment. They also never worked in a participatory democracy before. However, after the readjustment period, both students were able to create their own mark and coordinate with each other in order to complete various tasks. By the end, they both became more confident in not only approaches of creating a large-scale event, but also in group collaboration.

Overall, the Equitable Development Symposium was a tremendous success. The hope is to make this event annual as to increase awareness and draw more networks to create solutions to the current problem. The Center for Civic Engagement and Public Service, as well as the GW community are more than excited to continue their partnership with ONE DC.