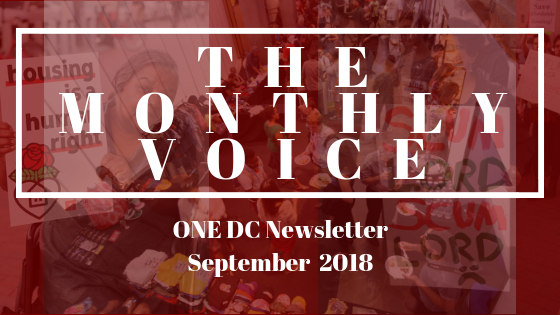 We invite you to join us with your family and friends on Saturday, October 20th between 5:00 PM and 11:00 PM for a community celebration at ONE DC’s Black Workers and Wellness Center, located at 2500 Martin Luther King Jr Ave SE. While enjoying a night of free music, food, and fun, take the opportunity to explore our space and hear from ONE DC members and organizer about how the BWWC supports ONE DC in its goal of creating and maintaining racial and economic equity throughout DC. Sponsored by Resource Generation - DC. 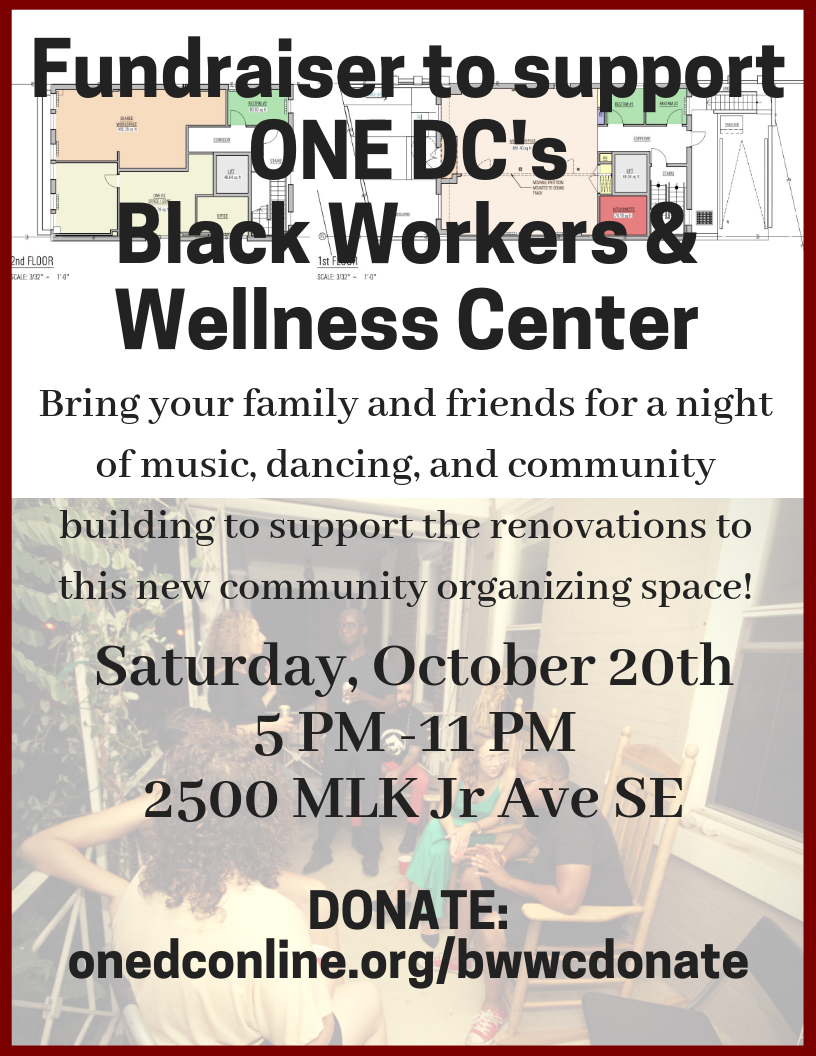 In ONE DC’s 2014 People’s Progress Report, we published a “time capsule for 2019,” a list of visionary goals we aimed to achieve by 2019. One of those goals has become a reality – the opening of the ONE DC Black Workers & Wellness Center in our own community-controlled space at 2500 Martin Luther King Jr Ave SE. The ONE DC Black Workers and Wellness Center (BWWC) is a resident-led space that creates and maintains racial and economic justice through popular education, direct action, and the creation of worker-owned alternatives. Here are a few updates from 2018:

Have you noticed, amidst all this political intensity, how Planet Earth is also shouting out to be heard? Endless rain in DC. Arctic lakes bubbling with escaping methane. Temperature record after record. Fortunately, Earth has YOU on her team. You believe that climate change is real. You know that we must immediately change our ways. You are willing to fight for a clean energy economy that is healthy, respectful, and good. 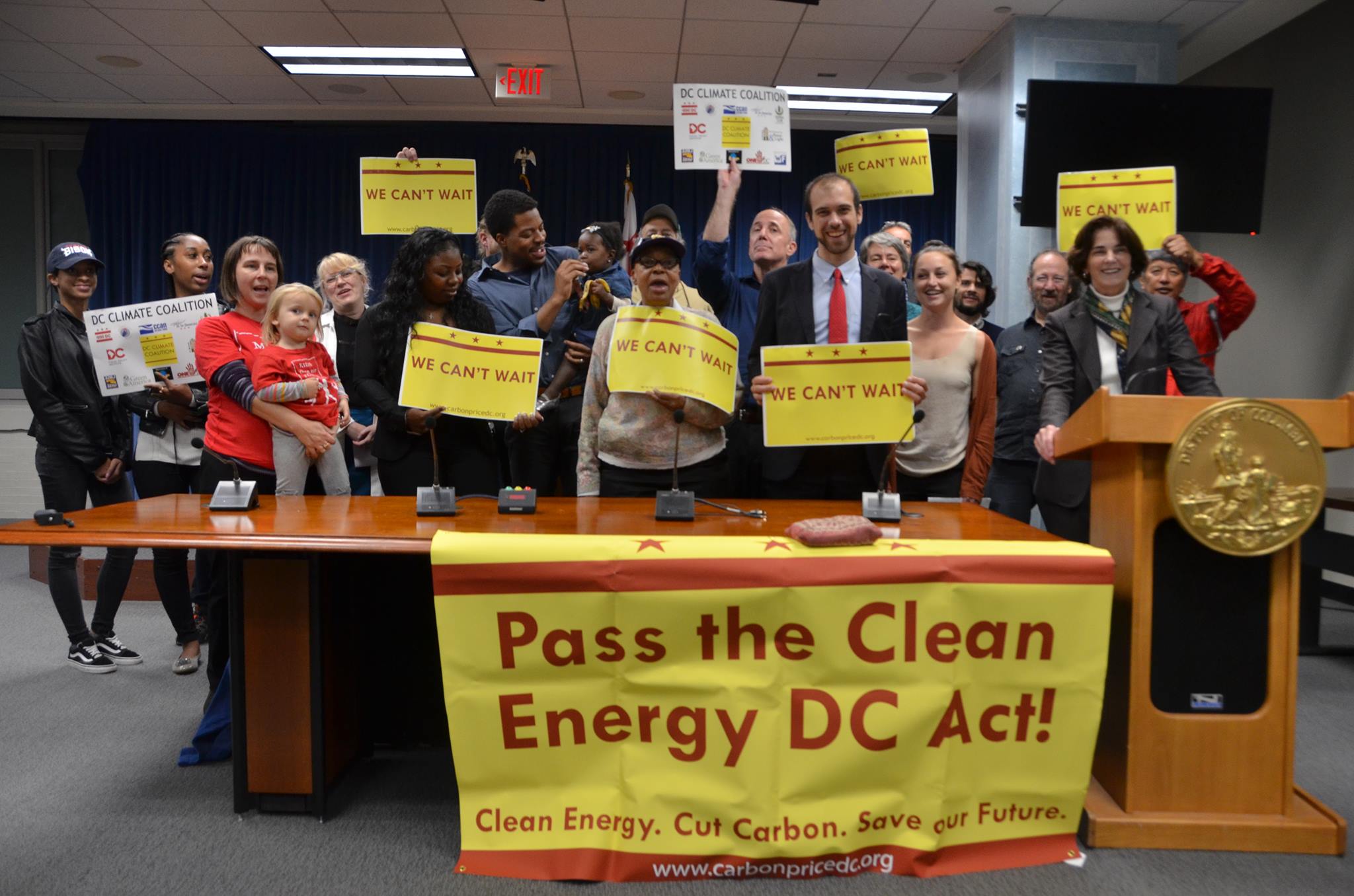 Tuesday's hearing is a huge milestone in over two years of rallying for strong clean energy and climate action in DC. We need you there to show overwhelming community support for members of the Committee on Transportation and the Environment. Any Councilmembers dragging their feet will understand that delay on the Clean Energy DC Act is unacceptable.

National press recently declared Clean Energy DC as the "strongest climate bill in the country." For one, it would require 100% clean electricity in DC by 2032. The bill also includes groundbreaking energy efficiency standards for existing buildings, which are the largest source of local pollution, as well as new funding for the Green Bank and Sustainable Energy Utility.

We encourage you to submit written testimony in support of the Clean Energy DC Act to the committee staff, Ms. Benjamin, at abenjamin@dccouncil.us. Written testimony will be accepted until October 23rd.

Can't make it? Send a letter to Councilmember McDuffie TODAY and urge him to support the Clean Energy DC Act - his support is crucial to passing this bill!

ONE DC is proud to serve as a community partner for the 8th Annual DC Palestinian Film & Arts Festival! From October 2-7, DCPFAF 2018 features 13 films, three hands-on tatreez and painting workshops, Spotlight Artist Saleh Bakri, and stand-up comedy with Mona Aburmishan!  Several events have sold out but there are still free events open to the public:

Currently, fare-evasion in the District is considered a crime that can result in arrest, up to 10 days in jail, and a fine of up to $300. The Fare Evasion Decriminalization Act of 2017 (Bill 22-408) would make fare evasion a civil offense punishable by a fine of no more than $100. Bill 22-408 recognizes that no one should have to face arrest of jail time for not affording a fare. The punishment does not fit the offense, and enforcement of such laws disproportionately impacts poor communities and communities of color. 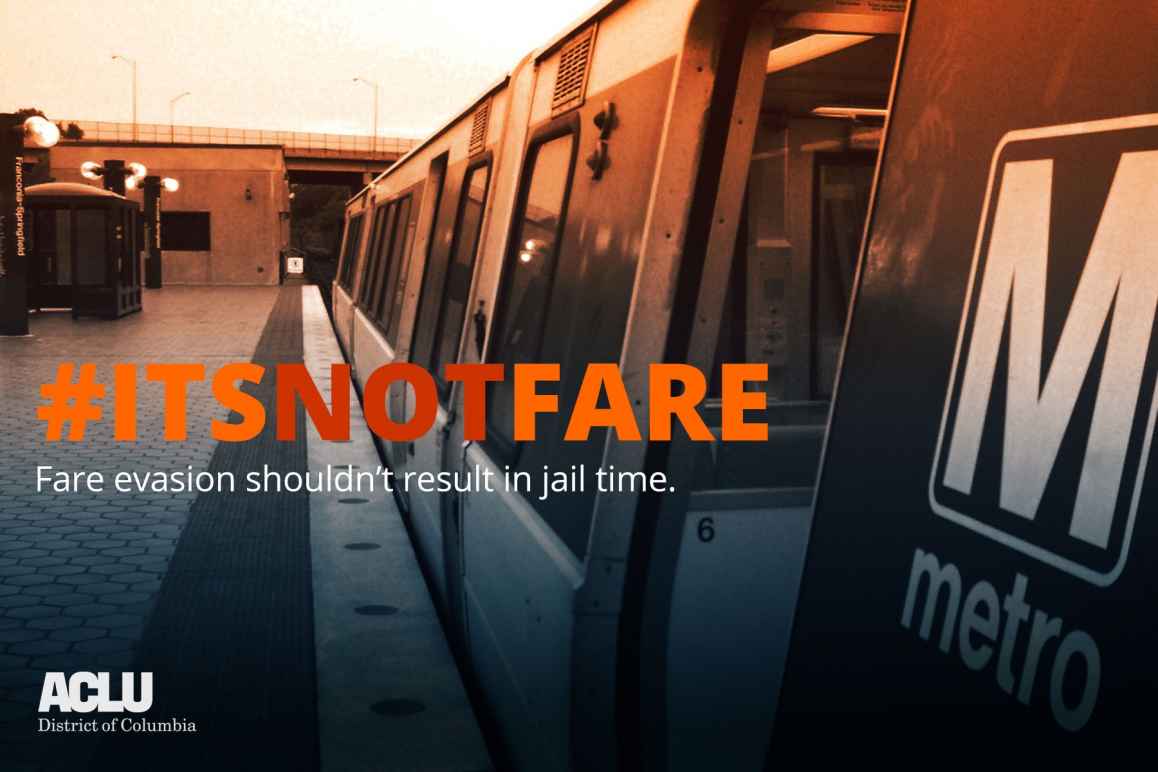 A parking ticket does not result in potential jail time, and failure to pay Metro fare should not either. It’s time to change our broken system.

What Can I do?

For years, top officials at DC’s Metropolitan Police Department (MPD) have participated in trainings with Israeli military and police, institutions which enforce an illegal military occupation over the Palestinian people. As DC residents, we should oppose all police trainings that use military occupation and state violence as a model. 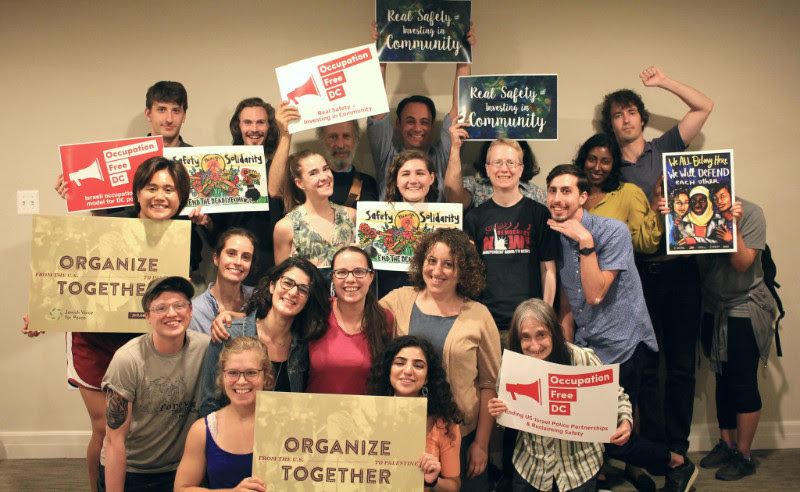 Take these steps to invest in our community and clear a path for real safety in Washington, DC:

Rally to Support the Nicholson Street Rent Strike
Friday, October 12 - 6:00 to 8:00 PM
1320 Nicholson St NW
Hosted by LEDC
The residents of 1320 Nicholson St NW have lived in terrible conditions for years: the building’s roof Leaks, ceilings are caving in, there’s mold in the walls, and many of the apartments are infested with bedbugs. The landlord has promised to make repairs but never followed through. Now tenants are ready to fight back. They’ve informed the landlord and the management company that unless repairs are made by October 1, they’re going to launch a rent strike. Tenants understand that the landlord’s neglect isn’t an accident; it’s a strategy to make money. Like many slumlords, the owner is trying to use the bad conditions to push residents out of their rent-controlled apartments so he can bring in new tenants who will pay much higher rents. Tenants have seen the same thing happen throughout the neighborhood and the city, and affordable apartment buildings are emptied and flipped into luxury condos. But they won’t allow themselves to be pushed out of Brightwood, a neighborhood that’s been their home for decades. Tenants at 1320 Nicholson are preparing to strike a blow against displacement, but they need the community’s support. Join them and show your solidarity on Friday, October 12!
Click here to RSVP


Jobs with Justice Organizing & Leadership Training
October 12 - October 14
Washington, DC - Location TBA
Hosted by DC Jobs with Justice
This three-day training is for community leaders, organizers, youth groups, unions, parent groups, faith leaders and parishioners, and advocates and activists that are not a part of an organization. The training will focus on strengthening relationships, building power, agitation, and accountability. Learn more about the training program. The fee for the training is $250.00 for the entire training per individual - scholarships are available for those individuals or organizations with financial need. For more information please contact Sequnely Gray at sequnley@dcjwj.org or 202-674-2847.
Click here to register

DC ReInvest Fall Kickoff Meeting
Saturday, October 13 - 12:00 to 3:00 PM
50 F St NW (near Union Station) 8th floor
Hosted by DC ReInvest Coalition
As the campaign continues to push DC to divest from banks that invest in private prisons, racist lending practices, and fossil fuel pipelines, we now have the opportunity to push forward a concrete vision for reinvestment. DC Council is deciding whether or not to establish a public bank based on their ongoing study. It's up to us to push forward a progressive and just vision of what we do want our taxpayer money to be invested in, right here in DC. We'll also continue to build momentum for victory on the bill that would both divest DC from Wells Fargo and increase banks' accountability to low-income communities in the District! All organizations that are part of / have been part of DCReInvest AND anyone who's interested in getting involved. LUNCH will be provided!
Click here to RSVP


Cops and Queers: The History of the Police and the LGBTQ+ Community in DC
Thursday, October 18 - 6:30 to 9:00 PM
Thurgood Marshall Center - 1816 12th St NW
Hosted by Rainbow History Project
On October 18th, Rayceen Pendarvis will moderate an historical discussion with Earline Budd, Craig Howell, Mindy Daniels, Dee Curry, and Brett Parson on the intersection between the LGBTQ+ community and the Metropolitan Police Department of Washington, DC. Tickets are free and not required for admission, but please RSVP so that we can have an accurate head count.
Click here to RSVP

A Place to Call Home - Author Talk with Ernesto Castañeda
Friday, October 19 - 6:30 to 8:00 PM
The Potter's House - 1658 Columbia Rd NW
In A Place to Call Home, Ernesto Castañeda offers a uniquely comparative portrait of immigrant expectations and experiences. Drawing on fourteen years of ethnographic observation and hundreds of interviews with documented and undocumented immigrants and their children, Castañeda sets out to determine how different locations can aid or disrupt the process of immigrant integration. Focusing on New York City, Paris, and Barcelona—immigration hubs in their respective countries—he compares the experiences of both Latino and North African migrants, and finds that subjective understandings, local contexts, national and regional history, and religious institutions are all factors that profoundly impact the personal journey to belonging.
Click here to RSVP

National Day of Protest Against Police Terror
Monday, October 22 - 6:30 to 8:00 PM
Gallery Place - Chinatown Metro Station
Hosted by Stop Police Terror Project-DC
Since 1996, October 22nd has been marked as a national day of protest against police brutality. As the September 6th murder of Botham Jean by a Dallas police officer has reminded us, the scourge of police terror ‒ and the racist criminalization, harassment, and mass incarceration that go along with it ‒ is as acute, unjust, and outrageous as ever. Join us on the evening of Monday, October 22, 2018, as we march and rally to condemn racist police terror, remember those who have been lost, and vow to continue the fight to put an end to racist police terror, harassment, and mass incarceration.
Click here to RSVP


DECOLONIZE: A Knowledge & Skill Share Un-Conference
Saturday, October 27 and Sunday, October 28th
George Mason University - 4400 University Dr, Fairfax, VA
Hosted by La Raza for Liberation
This unique two-day event is a radical space for people of color who are ready to listen, learn, teach, engage, and build. Our goal is bring together activists across human, animal, and environmental justice movements to better understand each other, challenge each other, and create new projects together.
Please RSVP by ordering a free ticket at eventbrite.com/e/decolonize-a-knowledge-skill-share-un-conference-tickets-49744112981 Contact info@larazaforliberation.org for more information.

D.C. History Conference
November 1 - November 4
University of the District of Columbia - 4200 Connecticut Avenue NW
The annual D.C. History Conference, formerly known as the Annual Conference on D.C. History, is a collaboration between the Historical Society of Washington, D.C., George Washington University, DC Public Library, and DC Office of Public Records. Since 1973, the mission of the conference has been to provide a friendly and rigorous forum for discussing and promoting original research about the history of the Washington, D.C. metropolitan area. The 2018 conference explores themes related to “Mobility, Migration, and Movement,” including the creation of Metro, the impact of migration to the region, and the bicentennial of the birth of Frederick Douglass, a man for whom mobility meant an escape to freedom.The conference will explore the complex meanings of mobility, migration, and movement in a city that has witnessed the Great Migration of African Americans and has the second-largest community of El Salvadoran residents in the United States.
Click here for more info & to register

Congratulations to ONE DC organizer Nawal Rajeh for being named a Baltimore Community Mediation Center's Peacemaker of the Year! Nawal is founder of the Peace Camp, a summer program in Baltimore utilizing arts, games and literacy to teach conflict resolution skills for youth. It is a project of By Peaceful Means. You can learn more abut the Peace Camp and By Peaceful Means here. 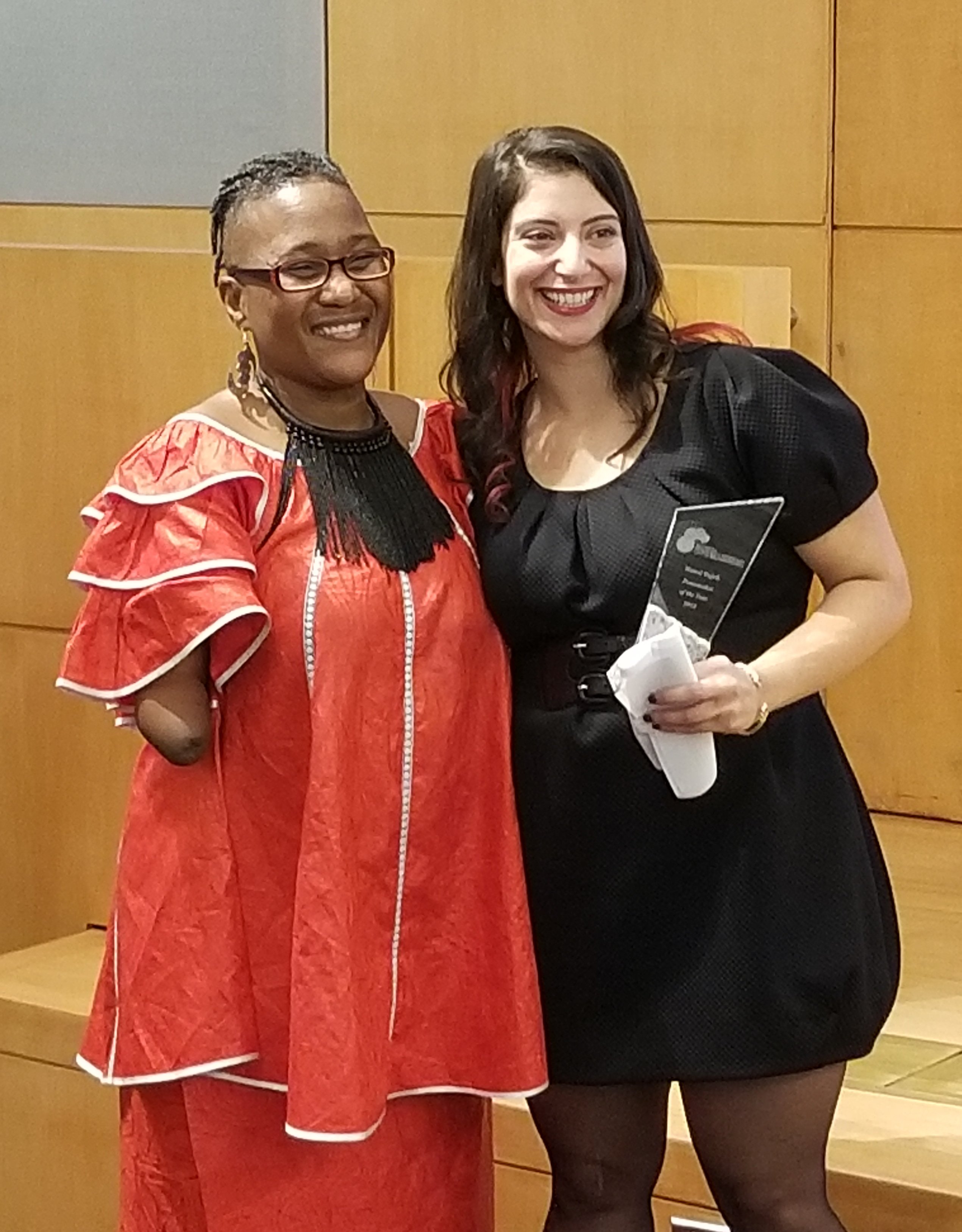 You can find online editions of the Monthly Voice here.
Do you want to be a writer, editor, or designer for the ONE DC Monthly Voice? Email organizer@onedconline.org