"Transformative demands are those demands that, on the one hand, attend to a particular crisis, whether it’s we need relief or we need housing, etc. But then those demands are ratcheted up and ultimately question the very logic of the prevailing system. If you say we need housing then the state could respond and say, 'We’re going to have a market system providing housing,' and they’re like, 'no, that’s not going to work, we’re going to demand something different than a market-based system.'" -Robin D.G. Kelly, Lessons from 20th Century Alabama's Black Communists for Black Lives Matter

We Believe That We Will Win

As we enter the final months of 2015, we reflect on just a few of the wins and progress we've accomplished so far this year. We're looking forward to closing out 2015 witnessing the positive and fearless energy and organizing of our members!

Right to Housing
-20 Mount Vernon Plaza tenants participated in rent strike to protest rent increases
-Tenants reached an agreement to extend affordability at Mount Vernon Plaza for another 7 years
-Organized with Brookland Manor tenants to hold board elections and appoint new members to the board.
-Organizing with Brookland Manor tenants to protest redevelopment of the property and displacement of residents

Right to Income
-20 members & staff travelled to Baltimore, New York, & Philadelphia on series of worker cooperative learning journeys
-Co-founded Cooperation DC and received grant to host 3-day cooperative training this November those seeking to start or support worker cooperatives in DC.
-Established a satellite office for the DC Black Workers Center at the United Black Fund in Anacostia.
-Published 'Trained to Death' and Still Jobless, an accountability report on the outcomes of the Marriott Jobs Training program, and released the report at a Juneteenth Press Conference with 60+ attendees
-Held a direct action at Mayor Bowser's office to demand First Source accountability

Watch video taken from the Movement for Black Lives Convening. Participants resisted after Cleveland police arrested a black youth on public transportation. ONE DC supported 9 members and staff in attending the M4BL convening.

1. Housing for every person. Housing is a human right, not an opportunity to exploit and profit.
2. Decent, dignified, and sustainable work or occupation for everyone who wants it.
3. A right to health for humans and the earth.
4. Government transparency, accountability, and participatory democracy.
5. Equitable development that values people over property. Development without displacement that cedes power over land use to democratic community control.
6. Equitable and equal access to a free, decent, holistic, non-imperialistic education that creates critical, political thinkers and leaders.
7. Full access for returning citizens to housing, jobs, education, as well as decriminalization, demilitarization, and prison abolition.
8. Access to safe and affordable transportation so that we can travel between our homes, jobs, schools, and recreational spaces.
9. A process of restorative justice for residents who have faced physical, emotional, or psychological violence at the hands of the District government and its agencies.
10. The right of return and reclamation for those who have been forced out of the District by developers and gentrification. We demand self-determination, which depends on our ability to control the land.

ONE DC is proud to announce we will be the fiscal and organizational home for Cooperation DC. Cooperation DC is a distinct project within ONE DC that is focused on providing technical assistance to worker cooperatives, with a focus on low-income communities of color. Cooperation DC will work closely with the ONE DC Black Workers Center, which will be conducting outreach, popular education, and organizing with workers who may be interested in starting worker coops.

From November 5-7, Cooperation DC will host a series of events and trainings related to worker cooperatives. There will be a session for training potential and current worker owners, one to expand our stock of worker cooperative lawyers, a community event where we'll put worker coops in context of a more equitable economy, and stakeholder convening with funders and government officials to share our vision and goals. Please contact Allison Basile at basile.allison@gmail.com for more information or to get involved with the work of Cooperation DC.

Not just an organization...a family.

This summer, I experienced some type of divine intervention: I found ONE DC. I am originally a Bay Area native, and have longed and often romanticized for an organization that I often didn’t believe could exist. I was highly interested in Urban Planning, and for my research paper, I decided to write about gentrification in Oakland. I searched the web for days looking for writers, political thinkers, anyone who could speak about the real root causes of gentrification. Naturally, I couldn’t find anything, until I found a paper written by Dominic about White Supremacy and Gentrification. After I read the paper, I found it a perfect opportunity to contact ONE DC for an internship opportunity for the summer. 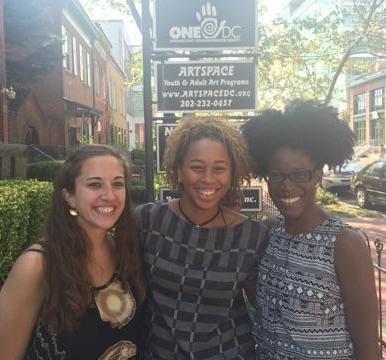 didn’t quite know what to expect because there wasn’t so much information available about ONE DC. It was when I first stepped in the office and felt the warmth and love, I knew this was going to be an amazing summer. I met Rosemary, a dedicated organizer that showed me that ground organizing was not only still possible, but is beyond necessary. I also met Marybeth, a passionate organizer that created a space where intellectualism and love were welcomed. I also met Jennifer, whose eloquence in speech was beyond inspiring. And Claire, the tech behind the scenes that helps keep the organization up and running. And Dominic, who was relentless in perpetuating the shared leadership model.I also got to meet all the wonderful people from the Shared Leadership Team, who brought unique and creative solutions to create the best possible organizing strategies; and people who attended the People's Platform meetings that shared the same beliefs. All of these people a part of the ONE DC movement were all so radical, because they showed me what real organizing looks like.

While every part of ONE DC was an amazing experience, it was working in Brookland Manor that really left an impression on me. Through ONE DC, I did phone banking trying to help organize a new tenant association board for the property which is planned to be demolished, in turn displacing hundreds of low-income Black families. ONE DC created the environment where I was able to listen and use organizing strategies that were revolved around leadership, equity, and resident-led projects. This was refreshing beyond belief because I have only been used to seeing hierarchal and patriarchal forms of organizing. I felt for the first time I was able to be doing the right work for the right reasons with the right people. This organization created an environment for self-reflection, positive feedback, and a way to expand my worldview in ways that I could not have imagined.

While I was only expecting to make phone calls, do technical jobs, ONE DC was all about everyone participating in organizing. To be able to firsthand see an organization that was devoted to Black organizing and a unique leadership design, was an eye-opening experience. In essence, I experienced growing pains. I was pushed beyond natural paradigms to imagine a world that everyone also calls cliche or impossible. ONE DC pushed me to envision a world without state violence, capitalism, anti-blackness, and patriarchy.  I absolutely loved interning at ONE DC this summer. I don’t consider it an organization; I consider it a family. I hope to find my way back to ONE DC, and continue to work with the forgotten people of DC.

ONE DC Fall Member Orientation
Monday, October 5th - 6 PM
ONE DC Office - 614 S St NW
As we gear up for major outreach and organizing this fall, we need the active engagement and support of our members. Come learn more about ONE DC's organizing structure, history, and current campaigns & committee work. Don't forget to recruit a friend, family member, or neighbor!
RSVP Here

2015 I'll Be There Awards
Thursday, October 15 - 6 - 8 PM
This is a fundraiser event to support the organizing and advocacy work of DC Jobs with Justice, who are celebrating their 15th Anniversary.
RSVP and more information here

Empower DC's Annual Meeting
Saturday, October 17  - 11 AM - 2 PM
Union Temple Baptist Church - 1225 W Street, SE
Join Empower DC for their annual membership meeting, featuring a discussion with public housing residents from Barry Farm and other communities on how they are fighting DC's displacement machine. The discussion will end with a call to action for allies, including specific ideas for how everyone can support public housing residents.
For more info, contact Parisa at parisa@empowerdc.org, 202-234-9119 x100. 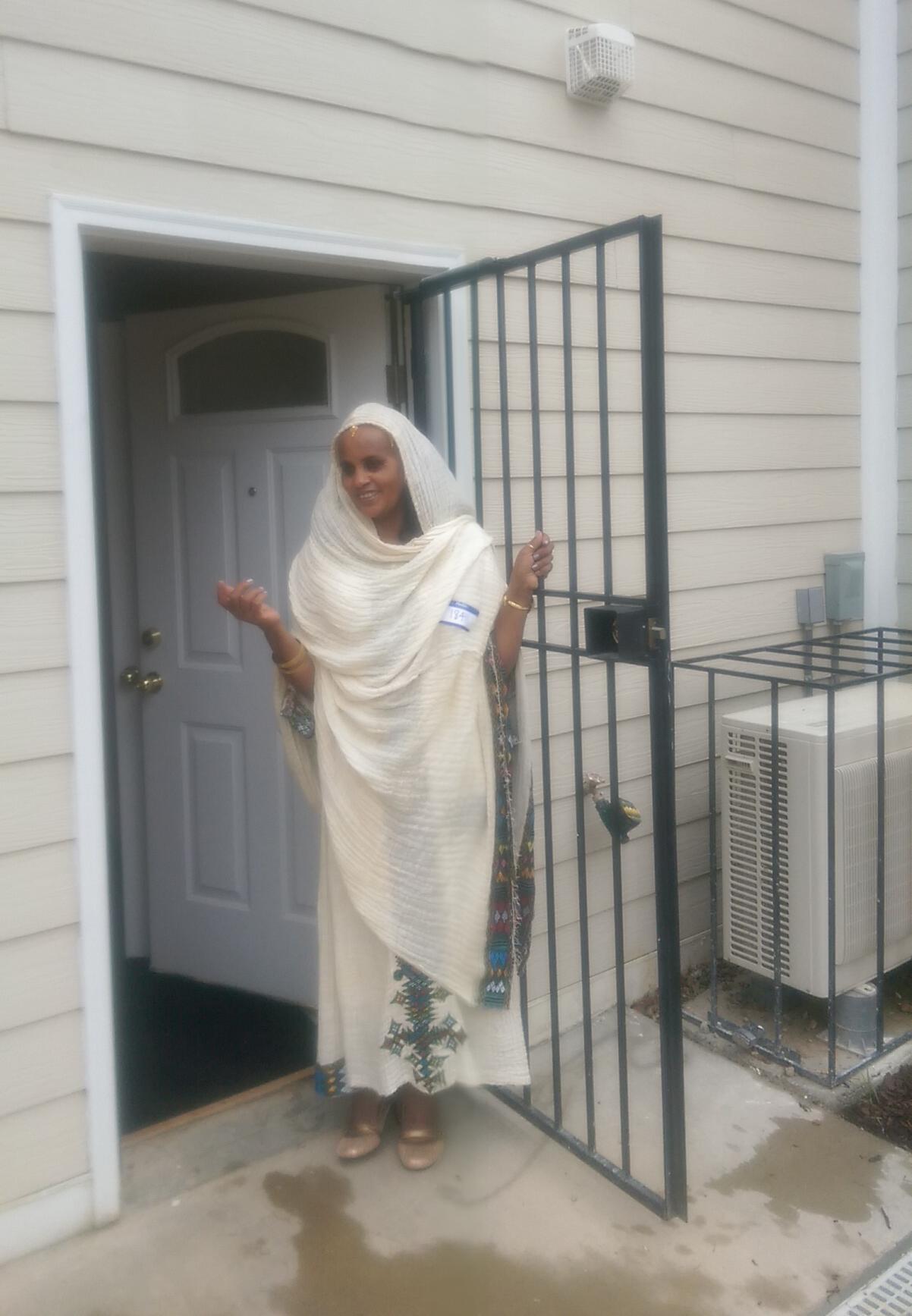 Congratulations to Azieb Tesfamariam on her new home! Azieb is a former tenant leader at Mount Vernon Plaza and current member of ONE DC. Residents organized to force their private owner and the Department of Housing and Community Development to extend the affordability for their building for at least seven more years. There are currently 6,000+ units in 46 buildings throughout the city that are set to lose their affordability over the next five years because financing does not require permanently affordable housing. Azieb continues her commitment to housing affordability for all through the People’s Platform. Thank you Azieb!