"I think we have to rethink the concept of "leader." 'Cause "leader" implies "follower." And, so many-- not so many, but I think we need to appropriate, embrace the idea that we are the leaders we've been looking for." -Grace Lee Boggs, 1915-2015. 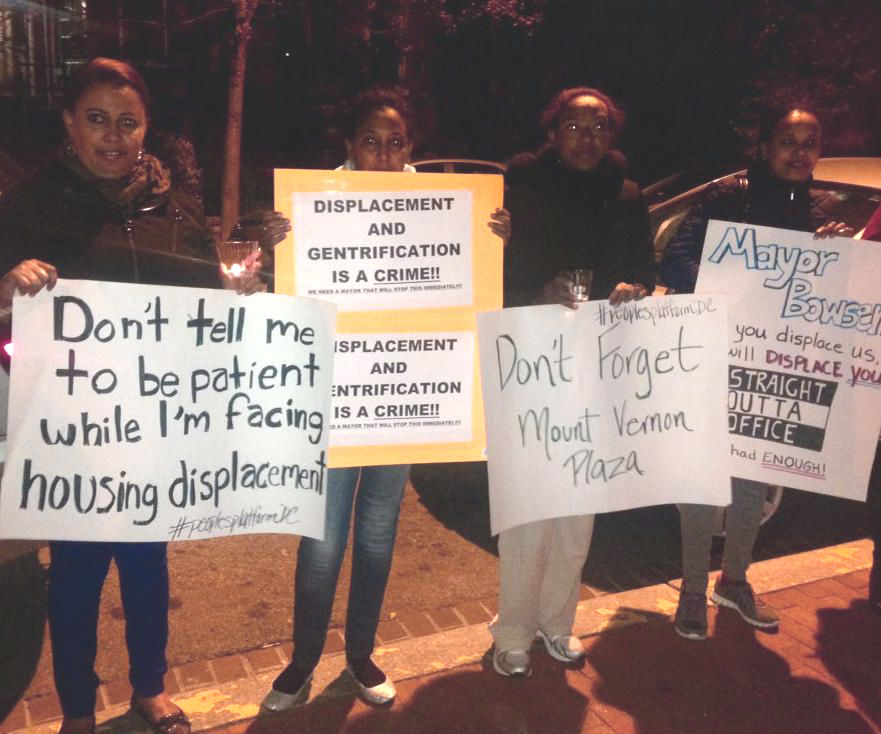 On October 26th, Mount Vernon Plaza Tenant Association, ONE DC People's Platform, Justice First, and Black Lives Matter DMV held a vigil in support of the Mount Vernon Plaza tenants fighting exorbitant rent increases. The vigil featured tenants, representatives from the Black Lives Matter movement and other community members sharing stories of displacement and making their demands to the Bowser administration. This vigil culminated a week of action demanding the Mayor shift priorities from policing to reinvestment in Black communities.
Click here for highlights from the vigil.


Racial Equity and Climate Change: Save the Planet, Save the People!

At the September 23 Climate Change Rally on the National Mall, ONE DC organizer Jennifer Bryant spoke of the lack of sustainability of current economic policies -- both to the global climate and the people of Washington, DC:

Climate change and gentrification have a lot in common. As we fight in DC to save communities like Barry Farms, Brookland Manor, Mount Vernon Plaza, Museum Square and so many others we recognize that what we are fighting is not just greedy developers and the local politicians that they've bought. We're fighting an entire system that is harmful and unsustainable. The fight for equitable development in DC and the fight to save the planet from climate change are the same fight. At the root of both struggles is an acknowledgment that our current global economic system is destructive and must be transformed.

The earth is not for sale, just like our communities are not for sale. We have to bring to an end the privatization and devastation of resources that should be shared among all people. We believe that this transformation will emerge from the place that all great movements have emerged: the grassroots. ONE DC will continue to build grassroots power and grassroots leadership in communities that are on the front lines of these struggles. And we'll continue to connect local issues of housing and jobs to the climate justice movement.

Why a Solidarity Economy?

"Why remain subordinated to the will of transnational corporations, States, and international institutions that identify themselves with exclusionary interests, if together, with our collective force, we can create public spaces, states, and new organizations that serve society’s empowerment, so that it becomes the leading subject of its own development in an autonomous and self-reliant way?

Why not become subjects of a creative and satisfactory work, free from oppression and exploitation, and which produces what we lack in order to meet our needs—cultural, physical, spiritual, emotional, and relational?

Our proposal is a socioeconomy of solidarity as a way of life that encompasses the totality of the human being, that announces a new culture and a new form of producing to fulfill the needs of each human being and of the entire humanity."

-The Latin Meeting on a Culture and Socioeconomy of Solidarity, Porto Alegre, Brazil, August 1998

Sustaining the Movement for Equity

Working while Black: The Goals of the Black Workers Center 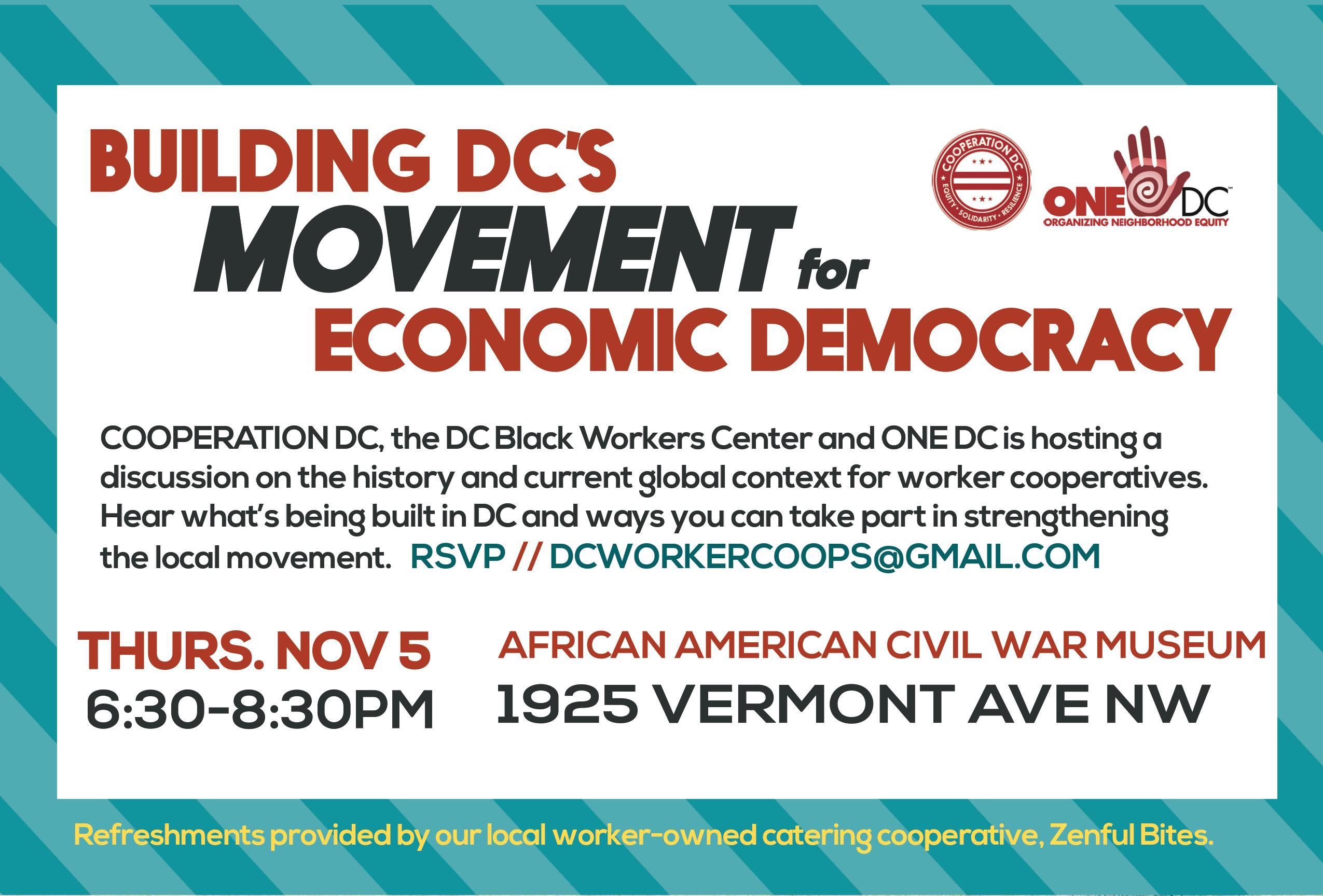 Applications are due Friday, November 13th, 2015. For more information and to apply, click here.

Let's Get Free DC: Report Back. Turn Up.
Thursday, November 12th - 6:00 PM
Join DC residents who attended the Movement for Black Lives (M4BL) convening as they offer reflections on what they experienced in Cleveland - the facilitated sessions, the importance of all-Black spaces, the transphobic incidents and subsequent calling in of cis folx by trans* and gender non-conforming people, the overall feeling of a family reunion, and much more. Please note this will be a Black-only space.
RSVP Here


Save the Date! ONE DC Member Appreciation
Saturday, December 5th - 3-6 PM
A celebratory event to recognize the leadership of ONE DC members and our wins in 2015. Have you paid your 2015 membership dues yet?
RSVP here

Thank you Black Benefactors for selecting ONE DC as your first grantee for grassroots organizing in DC!