"If we...want to map a different world, we have to use all our faculties to imagine life that is not beholden to the state and controlled through capitalism...Shapeshifters must always stay on the side of change, possibility, movement, and the future." -Aimee Meredith Cox, Shapeshifters

Black workers are one of the primary social forces in the Black Liberation Movement in the US. Historically and today, they experience racism on the job, in labor unions, and the most negative effects of ‘neoliberal globalization.’ At several points throughout their history, Black workers have analyzed their own conditions and concluded self-organization was key to gaining power over their own lives. In the tradition of autonomous Black worker organizing, the 2nd annual Black Workers Center (BWC) National Convening met on November 12-14 in Oakland, CA to strategize for Black Workers Power. The theme of the convening was “Black Freedom Dreams.”

The history and current conditions of Black people demonstrate the necessity of spaces like BWCs where Black workers can conduct popular education, organize campaigns, and create Black worker-owned cooperatives. The exploitation of Black workers and the ideological justification to maintain control of their labor is foundational to the US settler colonial project. In a workshop titled “Black Worker Centers Meet Organized Labor” respected labor organizer Bill Fletcher discussed how Black radicals and anti-racist Whites were excluded from the newly formed AFL-CIO in 1955 due to segregation in the labor movement and McCarthyism. Around the same time in 1951, Black workers created the National Negro Labor Council to fight job discrimination, racism in labor unions, and build what we today call Black Workers Power.

BWCs are slowly proving themselves to be spaces where Black workers can organize for power to overcome structural inequalities such as having twice the white unemployment rate, receiving 60% the white income, and Black median wealth 20 times less than that of whites. For example, the inaugural BWC in Los Angeles, in coalition with community groups, organized to win a project labor agreement (PLA) that requires 40% of workers hired onto Metro Construction projects come from ‘disadvantaged areas.’ The convening allowed all of us to compare notes and learn from each other so that we can infuse the concerns of Black workers into the emergent Movement for Black Lives.

View more photos from the convening 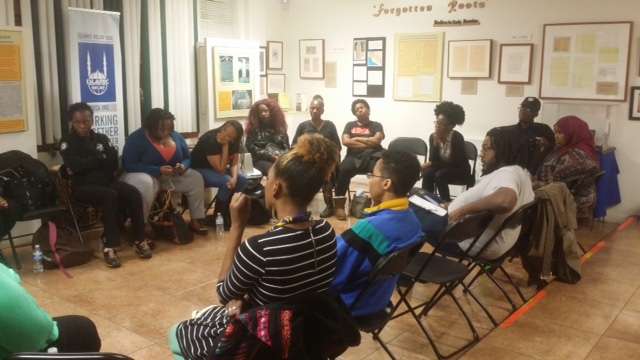 ONE DC members who attended the Movement for Black Lives Convening (M4BL) in Cleveland hosted a report-back at America’s Islamic Heritage Museum to reflect on the Convening and discuss Black liberation work in DC. We know Black-only spaces are necessary in order for us to heal and strategize on ways to further our movement. But as we witnessed at M4BL and discussed in SE last week, our movement must be intersectional, centered and led by directly-affected communities. When we say Black Lives Matter, we mean all Black lives – trans*, gender non-conforming, queer, women, undocumented, incarcerated, returning citizens, houseless, HIV-positive – all Black Lives Matter.

In November, Cooperation DC hosted a series of trainings and workshops on worker cooperative development. Here are a few exciting highlights: 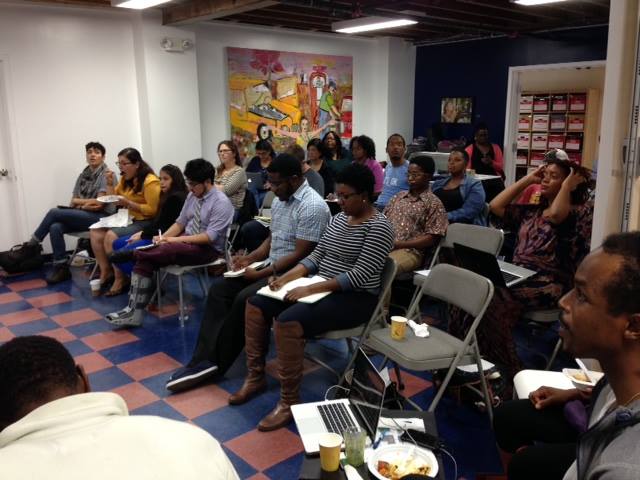 Lawyer? Accountant? Interested in Coop Development?
The final event in the series will be a training geared towards lawyers and accountants who want to learn strategies and best practices for supporting worker-owned businesses and a cooperative DC economy.
Click here for more details.
Space is limited. Click here to RSVP.

Saturday, December 5th - 3:00 - 6:00 PM
African American Civil War Museum - 1925 Vermont Ave NW.
Join us in celebrating YOU! Calling all ONE DC members, volunteers, donors, and supporters to join us in celebrating our wins and recognition of the hard work of ONE DC members. This event will feature food, music, poetry, and a special awards ceremony! All ages are welcome. Let's celebrate 2015 and explore our vision for 2016 and beyond to create an equitable DC. Please let us know if you need transportation or childcare by emailing organizer@onedconline.org or calling 202-232-2915. Email ccook@onedconline.org if you would like to help set up or volunteer.

This year, the Resource Development committee has focused on grassroots fundraising strategies to ensure our financial sustainability. ONE DC supporters have stepped up by becoming sustaining donors, hosting house party fundraisers, and recruiting new donors from their social networks.

This #BlackFriday, we'll be asking people to donate to support Black organizing. And on #GivingTuesday, we hope to get closer to our goal of 100 sustaining donors. We hope that you'll make a donation and help spread the word by sharing on Facebook and Twitter.