"People get used to anything. The less you think about your oppression, the more your tolerance for it grows. After a while, people just think oppression is the normal state of things. But to become free, you have to be acutely aware of being a slave." -Assata Shakur, Assata: An Autobiography

Can you imagine your name on the Wall of Liberation?

On Saturday, June 17th, ONE DC members, SURJ members, and supporters came together for an afternoon of good food, music, political education, conversation, and fundraising to celebrate Juneteenth! Baltimore-based hip-hop artist Son of Nun performed a couple of his amazing tracks. We heard stories & wisdom of movement building from our elders-- Betty Robinson, Arthur Brown, Jr. and Linda Leaks. Talented artists from around the DMV donated their art for a silent art auction.

As many of you know by now, in 2016, ONE DC launched a 2-year 10th Anniversary capital campaign to fundraise over $2 million for the Black Workers Center and to sustain our future work. We are close to purchasing a building to house the BWC. A community-controlled space is critical to building power, political education, and leadership development with an emphasis on Black workers.

It is essential that ONE DC, a Black-led organization, operate from a liberated space East of the River, where unemployment rates are the highest in the city and where residents are vulnerable to a new wave of mass displacement and gentrification. All Juneteenth donors who give $50 dollars or more will be receive of honor of being recognized on our sponsorship “Wall of Liberation” when we succeed in purchasing a building to house the Black Workers Center!

Please donate today to get YOUR NAME on the Wall of Liberation!

Tenants from Brookland Manor, Dahlgreen Courts and Congress Heights came together on Tuesday, June 20th for an action at City Hall where they got Ward 5 and Ward 8 council members Kenyan McDuffie and Trayon White on the public record with regard to underhanded displacement tactics and slum conditions tenants face at the hands of wealthy developers.

Click here to view a video of the tenant association presidents from each property giving their summary of the action and what it means moving forward.

With the aim to cover more ground during outreach combined with the influx of new summer interns, ONE DC has now dedicated every Thursday from 3 to 7 PM as a mass outreach day where all staff, members, interns, and volunteers who can spare their time come together to conduct outreach at various designated locations in D.C. This month, ONE DC conducted outreach at Congress Heights, Brookland Manor, and Dahlgreen Courts to build our base of tenants who are fighting against displacement and other housing-related issues. We are also doing outreach every Tuesday from 4 to 6 PM in Congress Heights and have ongoing opportunities to table or distribute flyers at events throughout the city this summer.

To join the ONE DC Outreach team and receive updates on where and when outreach (and outreach training) will take place each week, whether you can join us for one week, some weeks, or every week, simply send an email to organizer@onedconline.org and we will add you to the listserv. 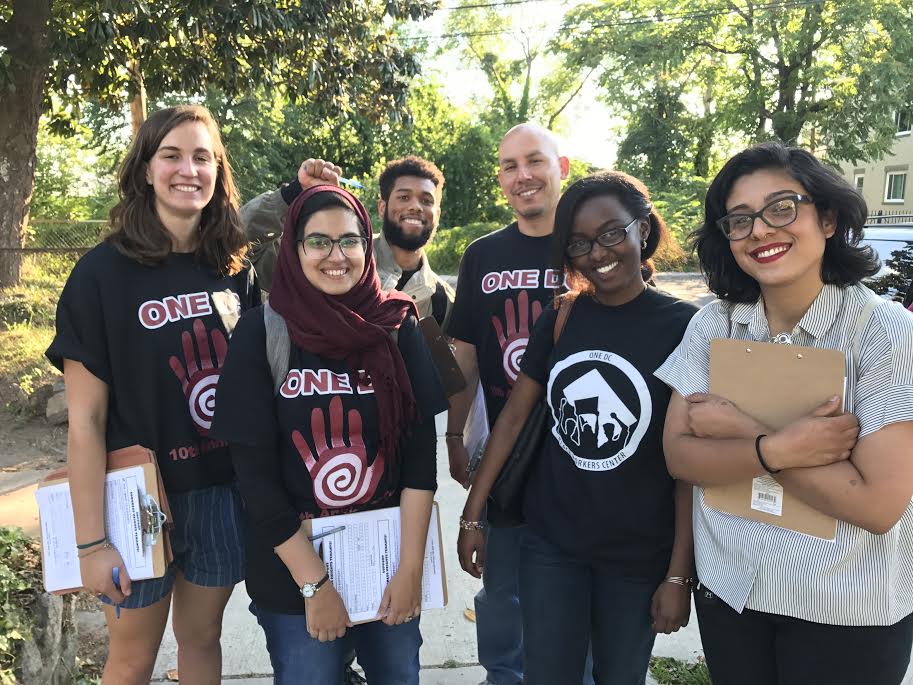 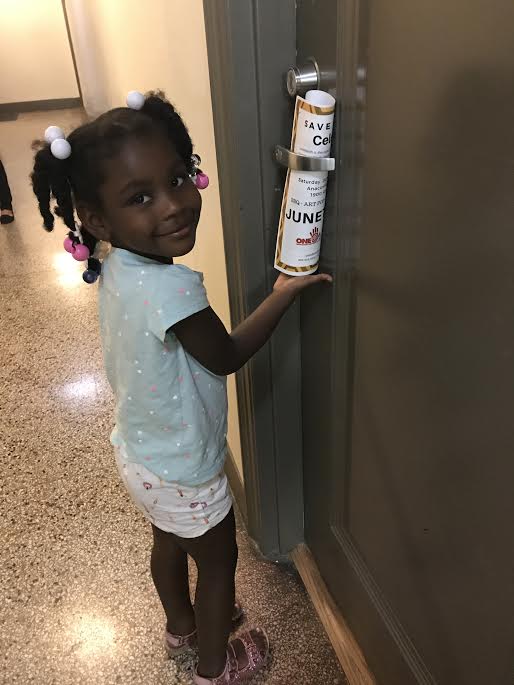 Serita El Amin is the granddaughter of Samuel B. Ethridge, a former National Education Association official who worked for racial integration of state teacher organizations during the civil rights movement of the 1960’s. In 1968, he was named head of the NEA’s newly created Center for Human Rights, which developed leadership programs. So in her life, Serita was inspired to follow her grandparents’ dreams and legacy, and wanted to represent through changing relationships between organizations. She has struggled in many areas of separation and displacement, and truly believes in human rights and remembering our ancestors and what they fought for. Serita lives in Washington, D.C., in the NE Brookland Manor apartments, where tenants are now trying to protect their rights and preserve affordable housing. She has lived at Brookland Manor for 18 years-- has one biological child and raised 16 children. Serita loves life and believes we should live life to the fullest with equal shares. She happily joined ONE DC's Making the Just City Project in 2017 to move forward to success and equal rights.

Click here for more info about Making the Just City. If you are a current or former Shaw resident who wants to get involved, please contact 202.232.2915 or organizer@onedconline.org.

Put a Price On It DC Coalition

ONE DC has attended several meetings over the past few weeks at the DC chapter of the Sierra Club to discuss a proposed climate rebate act with several other organizations. The “Put a Price On It D.C.” campaign includes groups like the Sierra Club, DC Divest, Working Families Party of DC, and Americans for Transit. The bill aims to tax people and businesses releasing carbon emissions into the environment. The fee would be $20 per ton of CO2 in 2019 and would rise to $150 per ton in 2032. With these goals, carbon pollution can be reduced by 23% in Washington, D.C. by 2032.

In terms of the bill’s progress, groups associated with “Put a Price On It D.C.” are working to convince DC councilmembers and both large and small businesses in the city to pledge their support. Direct outreach and canvassing will continue in order to put pressure on the DC government to support this bill that benefits both DC residents and our environment. The “Put a Price On It D.C.” campaign wants to make the capital city a leader in fighting climate change with this progressive legislation.

Click here to learn more and sign up for updates. If you would like to get involved with the Put a Price On It DC campaign as a ONE DC member, please email Claire at ccook@onedconline.org or call 202.232.2915.

Save Our System Transit Justice Rally
Thursday, June 29 - 5:30 PM
Columbia Heights Metro Station - 3030 14th Street NW
The Save Our System Coalition is organizing to oppose WMATA’s fare hikes and service cuts. At this rally we will be hearing from DC residents about their experiences with riding metro so we can organize and demand a better transport system. ONE DC joins this fight as reflected in People's Platform Principle #8: Access to safe and affordable transportation so that we can travel between our homes, jobs, schools, and recreational spaces.
Click here to RSVP

A Right to the City: Discussion on D.C. Neighborhood Change (Smithsonian Folklife Festival)
Thursday, July 6 - 1:15 PM – 2 PM
After a half-century of population decline and disinvestment, Washington, D.C., along with other U.S. urban centers, has been witnessing a “return to the city”—with rapidly rising populations, rents, and home prices, but also deepening inequality. This discussion with local community leaders, organizers, and artists is related to the Smithsonian Anacostia Community Museum’s forthcoming exhibition A Right to the City (2018), which explores the history of a diverse range of D.C. neighborhoods and how their residents helped to shape and reshape their communities in extraordinary ways. Participating in this discussion will be Dominic Moulden from ONE DC, Busboys and Poets owner Andy Shallal, and Paso Nuevo director Quique Avilés.
Click here for more info

Register Now for the People's Congress of Resistance

Registration is now open for the September 16-17 People's Congress of Resistance! This event will draw together grassroots resisters and diverse social movements from around the country for an exciting weekend of strategizing, deliberation and information-sharing. The registration fees of $50 and $100 help cover the enormous expenses that go with organizing an event of this magnitude. Click this link to register today!

The registration fee covers participation in the two-day event, not including housing, food and other personal expenses. If you cannot pay the registration fee but are eager to attend the People's Congress of Resistance, please fill out this form. We are collectively fundraising so that no one will be unable to come on account of funds.

The People's Congress of Resistance is also looking for local volunteers in DC. Click here to sign up.

On June 7th, at the Wiley A. Branton Award Luncheon, the Washington Lawyers’ Committee presented ONE DC with the Alfred McKenzie Award. We thank the WLC for their ongoing support & commitment to ONE DC and to tenants leading the struggle against displacement.

The Washington Lawyers’ Committee is proud to partner with ONE DC. In August of 2016, ONE DC, along with a group of families, filed a class action lawsuit challenging the discriminatory redevelopment of Brookland Manor, an affordable housing complex located in Northeast DC. More than 150 of the units house large families that have made their home on the property for generations. Brookland Manor is one of the few remaining DC communities with the four- and five-bedroom apartments necessary to provide safe, adequate housing for these families. Appallingly, the developer “justified” this discrimination claiming that large families are “not consistent with the creation of a vibrant new community.” The Washington Lawyers’ Committee and Covington & Burling represent ONE DC and the other plaintiffs in this case.

In addition, ONE DC’s organizers have identified important civil rights and racial justice issues facing tenants at multiple DC properties and connected those tenants to the Washington Lawyers’ Committee for legal representation. ONE DC has laid the groundwork for building trust between tenants throughout the District and the Committee, without which the Committee’s work would not be as fruitful and effective.

ONE DC’s values and work exemplify the life and spirit of Alfred McKenzie. In his name, we are proud to honor Dominic Moulden and all of his colleagues who make ONE DC a dedicated and courageous partner with which we hope to work long into the future.

Do you want to be a writer, editor, or designer for the ONE DC Monthly Voice? Email organizer@onedconline.org