But the world is big
Big and bright and round
And it's full of folks like me
Who are black, yellow, beige and brown

Mr. Backlash, Mr. Backlash
Just what do you think I got to lose
I'm gonna leave you
With the backlash blues

-Langston Hughes/Nina Simone
In June 2016, ONE DC will be celebrating our 10th year of organizing for racial & economic equity in the District. With the People's Platform and the Black Workers Center, ONE DC members are envisioning a vastly different city, a DC that prioritizes its people over profits. As we continue to organize around the deep-rooted, systemic issues that are creating a city of inequity, we'll need to ensure our financial sustainability for the next 10 years and beyond.
We are looking for people to join our 10th Anniversary Fundraising Committee:
Email dominic at dmoulden@onedconline.org or call 202-232-2915.

“This is about controlling our labor, and that’s what Juneteenth is all about. Wouldn’t it be fundamentally different if directly affected people were doing the trainings and own the companies that were doing the hiring?” Dominic Moulden, of ONE DC, asked.

The press conference was held on June 19, or “Juneteenth,” the day slaves were emancipated across the American South. This year marked the 150th anniversary of the end of slavery in the U.S.

Moulden described ONE DC’s plans to build a “Black Worker Center,” which would be used as a space to build community power, organize residents and educate them on their labor rights, and incubate community-controlled businesses.

“What we’re saying is that the jobs training and workforce development isn’t enough,” Moulden said. “If you want to change structural inequity and chronic black unemployment in D.C., we need to create our own community-controlled businesses and control our own labor.”


Miracle Bowlding - Cesar Chavez Public Charter Schools for Public Policy
Miracle N. Bowlding is a rising Senior who attends Cesar Chavez Capitol Hill. I am from NW DC but I currently live in Southeast DC considered as Ward 8. YES! I want to attend college UCLA or Berkeley. I am still undecided between the two. I am very outgoing and a little shy when it comes to meeting new people. I am very organized and intelligent. I am very excited to be working with ONE DC as an internship. I work with some powerful leaders and I hope to become one in the future.

Taylor Gamble - Cesar Chavez Public Charter Schools for Public Policy
Taylor Gamble is a rising senior that attends Cesar Chavez High School for Public Policy. From Washington DC southeast. She comes with being an outspoken person, very outgoing and organized, dealing with anything no matter the situation. ONE DC was her fellowship organization & from the feedback she enjoyed herself here. She also liked advocating for different issues that was a huge problem or becoming a huge problem in the Washington DC area.

Mia Campbell - Georgetown University
Born and raised in New York, Mia is a first-generation American with parents of Caribbean and European backgrounds. She is a rising sophomore at Georgetown University where she is on the pre-med track studying Women’s and Gender Studies and Biology of Global Health. She dreams of a future where her interests in social activism and reform, the betterment of marginalized communities and individuals, medicine, health and people in general, overlap to create a fulfilling career of helping people and helping them help themselves. Mia is very excited to be involved in progressive community organizing, equitable development, and resident-led policy change in DC this summer.

Kevin Ruano - Georgetown University
Born in El Salvador and raised in the local DMV area, he is very excited to work with the local working poor community. At Georgetown he has been a part of the Kalmanovitz Initiative's Day Laborer Exchange, the DC Schools Project and La Casa Latinx Campaign which is trying to establish a permanent space dedicated to the US Latinx narrative. Seeking to affirm the dignity of all marginalized identities, Kevin hopes his summer experience with ONE DC will inform his aspiring organizer/writer for the marginalized ambitions.

Assata Harris - University of California, Davis
I was born and raised between Richmond and Berkeley California. Being named after Assata Shakur gave me huge shoes to fill! I became interested in community organizing since my early age. I have worked for Black panther commemorator party, Institute for sustainable economic, environmental , equitable design, Step to College, Oakland Science Math Outreach. I am a third year student at University of California, Davis. I am here for a summer internship program! I have passion as my strategy and am so excited to be interning for DC One. I love their commitment for community equity for displaced, lower income communities! I look forward to a wonderful summer!

Take action this month with ONE DC. 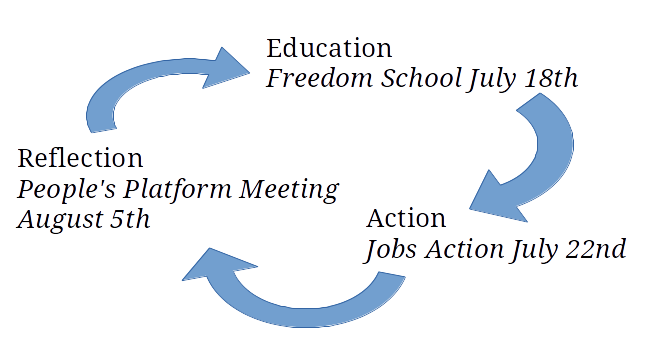 Freedom School on State Violence
Freedom School will include discussion, group breakouts and exercises, video, art, music, and fellowship with other ONE DC members. Food will be served. We are encouraging everyone who plans to attend the Jobs Action on July 22nd to join us at Freedom School.
Saturday, July 18th - 12-4PM
Location: TBA
RSVP Here

In June, ONE DC member Art Brown hosted a fundraising party at his home. He helped raised over $500 in financial support for ONE DC, including recruiting 2 sustaining donors! Thank you Art! If you are interested in hosting your own house party or social to support ONE DC, email dominic at dmoulden@onedconline.org or call 202-232-2915.

DC Jobs with Justice Workers' Rights Board on Just Hours 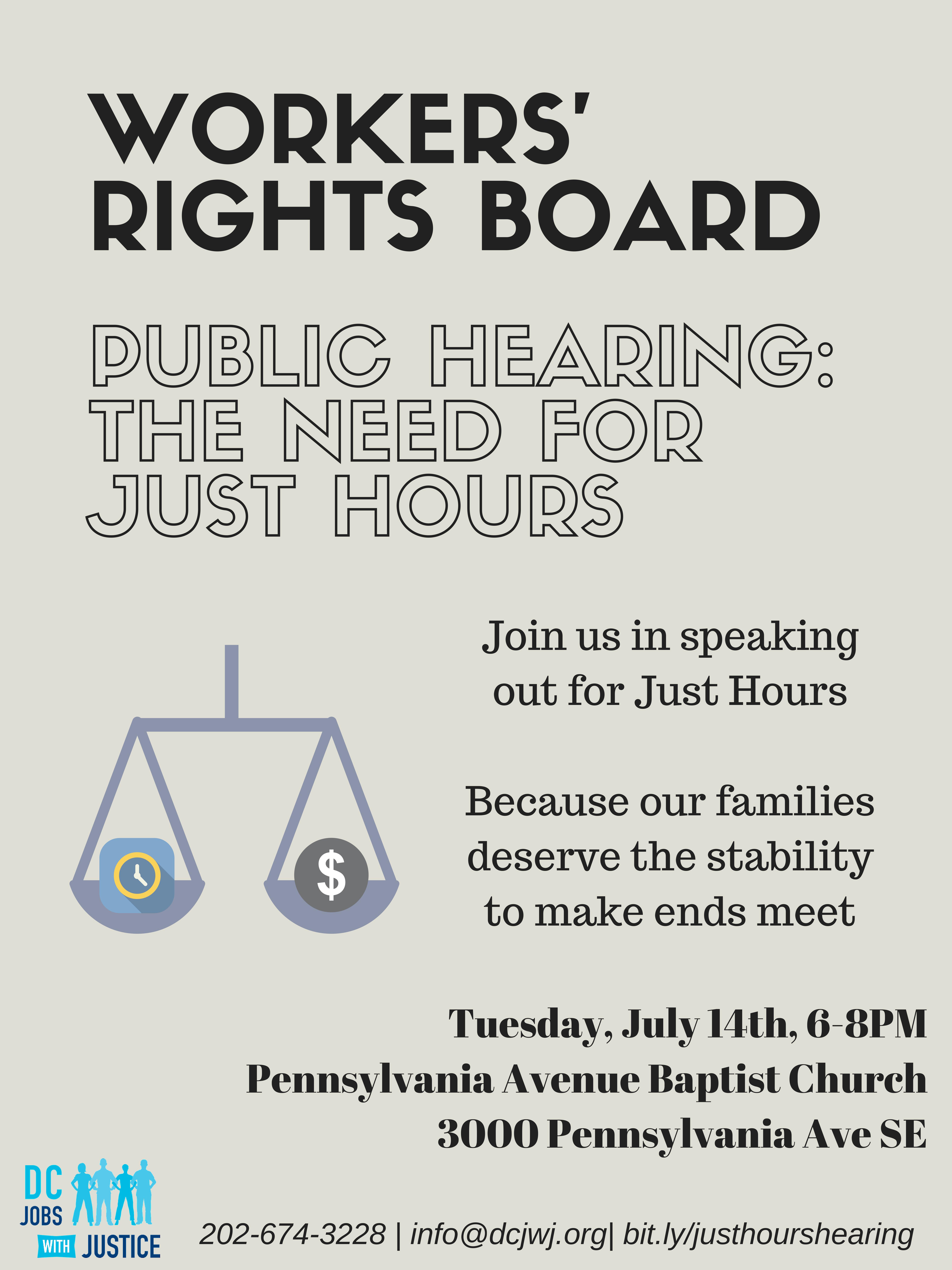 Do you shop at Amazon?

When you shop at AmazonSmile, Amazon donates 0.5% of the purchase price to ONE DC. Bookmark the link http://smile.amazon.com/ch/87-0766022 and support us every time you shop.