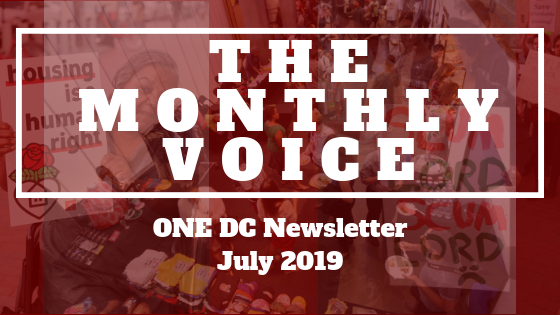 "Freeing yourself was one thing; claiming ownership of that freed self was another."
-Toni Morrison

Next up for ONE DC’s Right to Housing Committee is the Freedom School. We’ll dive deeper into the issues raised by participants in the mini assembly: Displacement by Force and Landlord Neglect. All of this work will lead to our city-wide People’s Assembly in the Fall. To get involved, email Patrick at pgregoire@onedconline.org or call 202.232.2915.

Organizing for Liberation - Donate toward the BWWC Renovations

The ONE DC Black Workers & Wellness Center is a member-led community & wellness space in Anacostia that builds racial & economic justice through popular education, organizing toward sustainable employment, & the incubation of economic alternatives such as worker cooperatives.

We are an organization with a membership base comprised of longtime DC residents who have been directly affected by displacement, gentrification, and structural unemployment. Our organizing model centers the voices of those who are ignored by wealthy developers and government officials. Our strength comes in numbers, and need YOU to help us build political strength in the District.

When you donate to our BWWC Capital Fundraising campaign, you are joining hundreds of others in making a community-controlled Black-led space in DC a reality. Please give today!

Liberation Flix: Eyes on the Prize, "Power!"
Saturday, August 10 - 4:00 - 7:00 PM
The Justice Center - 617 Florida Ave NW
Organized by Party for Socialism & Liberation
The Party for Socialism & Liberation's Black Liberation summer film series continues with the series Eyes on the Prize, featuring the episode "Power!," which highlights Black power in its various forms throughout the 1960s and 1970s, such as the Black Panther Party for Self Defense. Light refreshments will be provided. Films will be followed by a group discussion. Donations of $5-10 will be accepted via cash or card at the door, though no one will be turned away for lack of funds.
Click here to RSVP

Defend Healthcare East of the River!
Thursday, August 22 - 6:00 - 8:00 PM
United Medical Center - 1310 Southern Ave SE, Conference Room 2 & 3
Organized by the DC Health Justice Coalition
The fight for UMC and access to quality health care East of the River is not over. On August 22nd, Ward 7 and 8 community leaders are meeting to discuss improving the access to healthcare East of River. UMC is set to close in January 2023 and there are discussions of a new hospital on the St. Elizabeths campus. The community must be a part of these discussions and it is time to strategize. Join US!

Admin & Member Engagement Meeting
Tuesday, August 27 - 6:00 - 7:30 PM
ONE DC Black Workers & Wellness Center - 2500 MLK Jr Ave SE
Admin & Member Engagement committee is made up of ONE DC members, staff, and new volunteers, and is responsible for organizing administrative support for the organization as a whole, such as our communications, website, social media, grassroots fundraising, event logistical support, and other needs for ONE DC organizing campaigns and programs. It is a space where ONE DC members and supporters, both new and long-time, can learn more about ONE DC, find out what’s upcoming, and engage in the real, everyday work of the organization.
Click here to RSVP


Serve Your City Summer Programs
An invitation for students ages 9-17 to join Serve Your City to try a new sport, get centered, and learn new skills!

ONE Piece of Good News - ONE DC is hiring!

We are looking for 3 exceptional organizers who are passionate about grassroots community organizing and committed to the struggle for liberation.

We are currently hiring for the following positions:

You can find past editions of the Monthly Voice here.
Do you want to be a writer, editor, or designer for the ONE DC Monthly Voice? Email organizer@onedconline.org