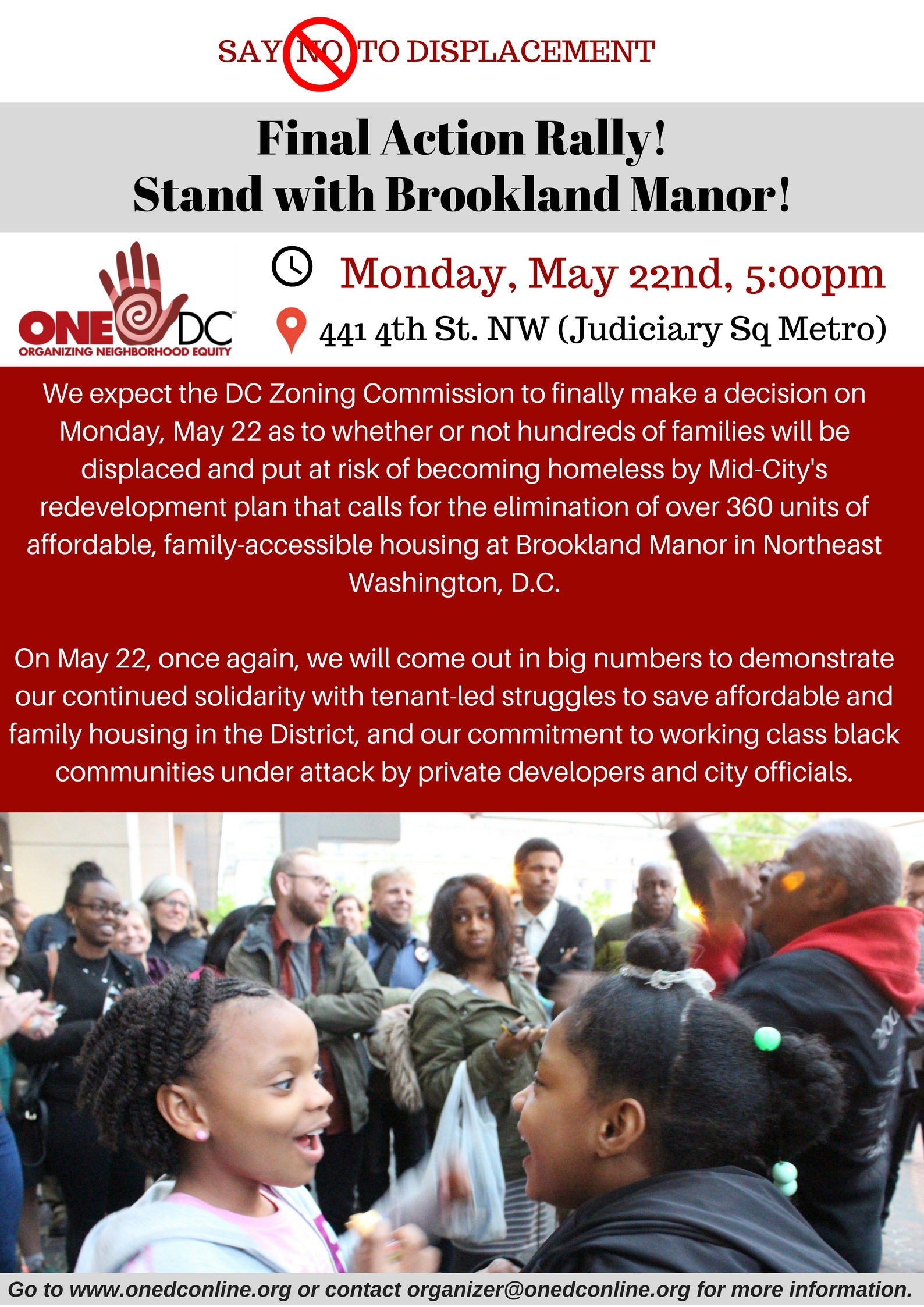 We had a great turn-out at the hearing on April 24th! The room was packed with residents and supporters for Brookland Manor. Last night the Commission did not make a ruling. Instead, it pressed Mid-City Financial for answers on how multi-generational families will be housed in the redevelopment, with respect to seniors who wish to remain with their grandchildren and families who would end up broken up, as well as how families can qualify for 3 and 4 BR townhomes (available for homeownership). Chair of the Zoning Commission Anthony Hood also raised concerns about families with individuals with disabilities who should remain together.

This would not have happened without the leadership and resilience of Brookland Manor tenants and ONE DC members, and the widespread community support they have organized and inspired. It is critical that we continue to keep up public pressure on a system that puts the interests of profiteers before those of the people, and one that continues to develop by way of displacement. We expect the DC Zoning Commission to finally make a decision on Monday, May 22, and on that day, once again, we will come out in big numbers to demonstrate our continued solidarity with tenant-led struggles to save affordable and family housing in the District of Columbia, and our commitment to working class black communities under attack by private developers and city officials.

Background on the tenant-led struggle at Brookland Manor:

The Brookland Manor/Brentwood Village Resident Association, ONE DC tenant members and residents at Brookland Manor are organizing against a forced displacement campaign led by developer Mid-City Financial, a group that has moved to displace working class people of color from one of the few remaining affordable housing properties in Washington, D.C. Residents of Brookland Manor have been subjected to discrimination based on family sizes; have faced documented harassment at the hands of a private armed security force; and mass evictions that were only slowed down after public exposure. To date, Mid-City’s displacement tactics have gone unchallenged by Ward 5 Councilmember Kenyan McDuffie.

Mid-City Financial has outlined a plan to demolish all 535 units of affordable housing, and replace it with over 1750 units of mostly luxury apartments. Under their proposed plan, overall affordability [in the midst of an affordable housing crisis in the nation’s capital] will be reduced from 535 to 373 units, and all five, four, and most three bedroom units eliminated. Covington & Burling, along with the Washington Lawyers Committee recently filed a groundbreaking lawsuit challenging the constitutionality of development plans that target a protected class (families), by effectively eliminating family housing.

At the first stage zoning hearing, representatives of Mid-City Financial suggested that due to “natural attrition,” some tenants would leave Brookland Manor, and that their absence from the property would help to justify Mid-City’s plans to build luxury apartments in place of deeply affordable housing. What the developer refers to as “natural attrition,” residents experience as violent displacement.

At the second stage zoning hearing, representatives of Mid-City Financial doubled down on their plan to displace families and eliminate affordable housing at Brookland Manor. Further, their attorney attempted to use loopholes in order to avoid discussion on the key issues with respect to affordable housing and displacement, and instead attempted to focus the meeting on the color of the bricks and the kind of shrubs that would be planted as part of their planned redevelopment.