Join ONE DC this Sunday at Busboys & Poets (14th & V) for A.C.T.O.R. (A Continuing Talk on Race) presents: Deconstructing Gentrification: Development Without Community. 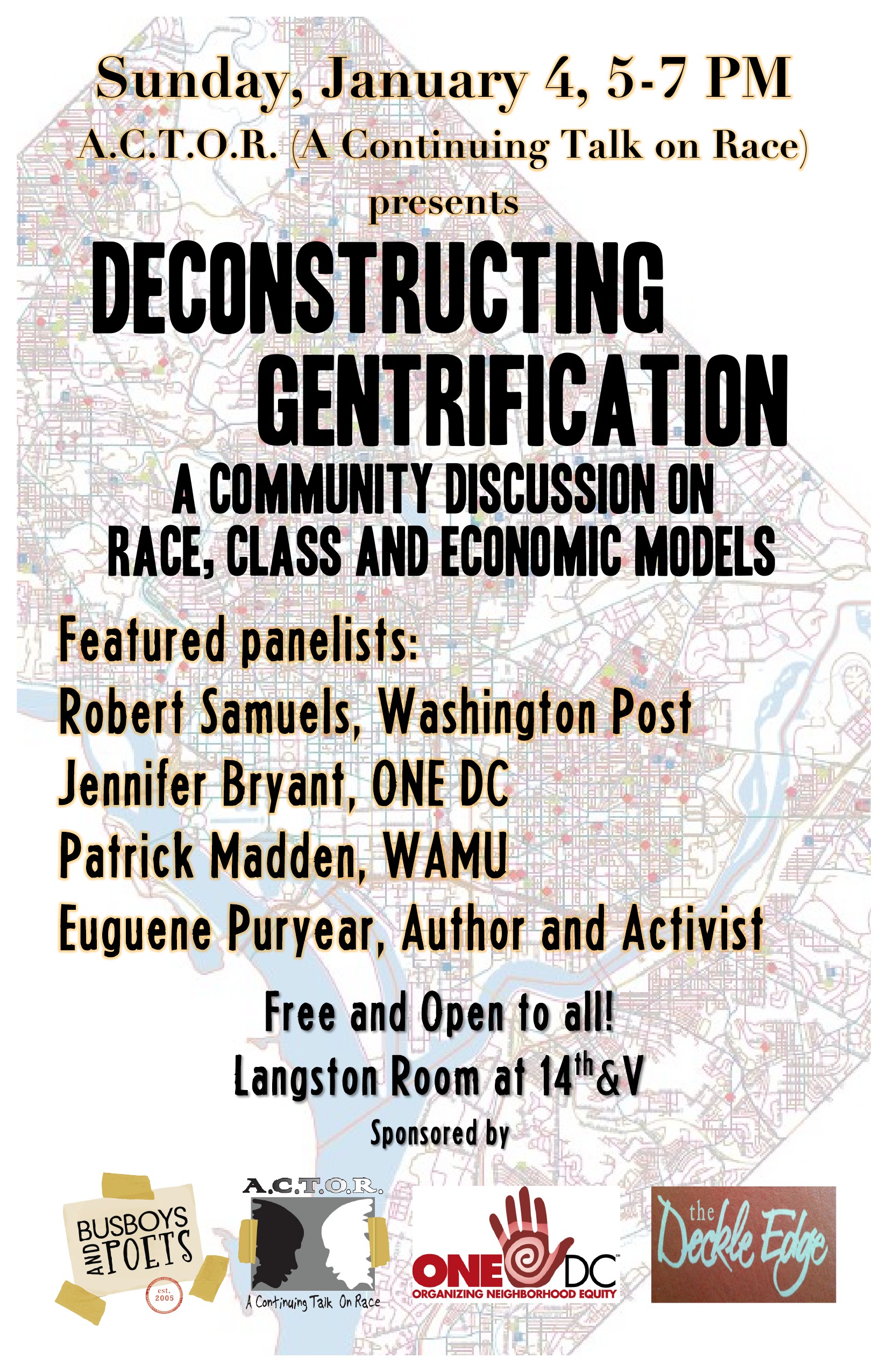 The first A.C.T.O.R. discussion of 2015 will focus on the topic of gentrification and its disproportionately negative impact on poorer communities and people of color. Join us in exploring the definition and causes of gentrification, as well as constructive actions to counteract the current models of urban development and displacement.

Black lives matter, and must be appreciated. December is about appreciating all members of our community, and demanding that they are respected in their workplaces, homes, and in their city. We give thanks to all of our members, volunteers, donors, and partners who helped make 2014 an incredible year of growth and movement building.

Make your 2014 contribution to ONE DC today.

This was the opening question of the 2014 National Convening of Black Workers Centers, a gathering that brought together labor activists from around the country.  I, along with 3 other ONE DC members and organizers, had the opportunity to attend and kick-off ONE DC’s efforts to create a DC Black Workers Center.  As a young, 22-year old, who has just returned to my hometown of DC after graduating from college in Chicago, I have energy, but what I need is a vision.  Organizing with ONE DC, I’m reminded that I am part of a powerful and historic legacy.

This is what I learned from the convening of Black labor activists: what we’re seeing today – in Ferguson, in Staten Island, and here in DC – is part of a larger trend, and our response must incorporate that history in order to illuminate the larger trends.  ONE DC is offering a space to do that.  Through Freedom Schools, listening sessions, and political education workshops, we as ONE DC are educating ourselves and exchanging knowledge in order to craft an effective response to the issues we face.

Now, we need to continue building momentum by drawing parallels between what different local groups are doing across the country.  For example, ONE DC is emerging from the Marriott campaign, an effort to enforce the First Source Law in DC, which states that any development project receiving more than a given amount in public funds is required to hire 51% DC residents in their new hires. In Los Angeles, the L.A. Black Worker Center is pushing for similar accountability.  To strengthen the national movement, we need to celebrate the wins and recognize the struggles happening across the country.

This is particularly true now, when the nation’s attention is focused on police brutality targeting black lives. As we come together to voice outrage over this issue, we must recognize this is part of a larger systemic trend.  We must contextualize police brutality within the larger issue of disparate social power, exemplified by mass incarceration; inequitable public education; vast differences in health, by neighborhood; and disparities in earning potential.

And this response must be united nationally.  This was a predominant message coming out of the meeting: we need a national political agenda that is directed by the needs of Black people in America.  And note the emphasis on the political – we must engage in the political process.

I have too many family members and friends who are disillusioned with the electoral process, and rightly so.  However, recent events in Ferguson remind us about the importance of voting. For example, Ferguson, MO is 67% African-American.  In the 2012 general election in which President Obama was reelected, 76% of Ferguson came out to vote.  However, in the last mayoral election that resulted in the selection of Mayor James Knowles (the current and controversial mayor), only 16% of Ferguson showed up at the polls. And this mayor has influence – including appointing power - over the (majority white) police force and city council.

We often feel like the electoral system and all of these messy politics don’t concern us, but they can, and they should.  ONE DC understands this.  The People’s Platform is pushing for a resident-led political process, one that would effectively communicate our demands to elected officials and hold them accountable.

And so, my conclusion coming out of the Black Workers Center National Convening is this: the current momentum and growing people power must result in a national political agenda, one that is committed to quality jobs for Black workers, and ONE DC has a valuable role to play in that.

Know Your Rights: Ban the Box 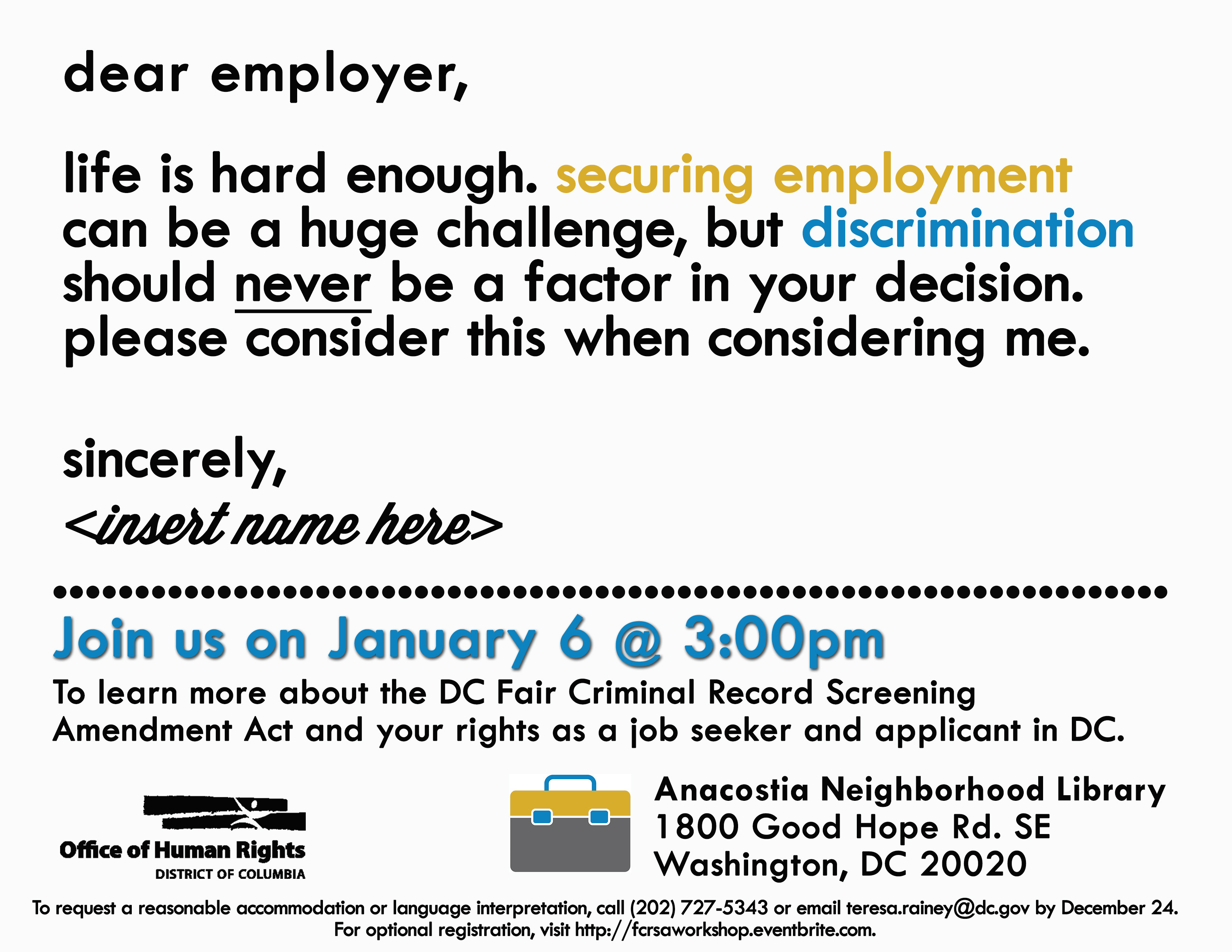 Do you have a criminal background that's keeping you from getting a job?  The Fair Criminal Record Screening Amendment Act of 2014 is a new law that prohibits most employers in DC from asking about your criminal background on job applications or in interviews. The DC Office of Human Rights (OHR) is charged with enforcing this new law.  In this workshop, OHR staff will review how the law works, how to file a complaint if you believe an employer violated the law, and what you can receive in damages if it is determined that an employer violated the law.

To request a reasonable accommodation or language interpretation, please call (202) 727-5343 or email teresa.rainey@dc.gov by Dec 24th.

Take Action to Reunite Haitian Families as an Individual or Organization

One major effort of the Black Alliance for Just Immigration right now is the Reunite Haitian Families campaign. This initially involved calling for a parole program that would allow Haitians with family approved visas to come to the U.S. and stay with their families while their visas are being processed. This work has been spear headed locally by Haitian Women for Haitian Refugees. We were able to get the parole program, but it covers only 5,000 of the 110,000 Haitians with approved visas.

ONE DC is calling on our members and partners to join us in endorsing the petition for a comprehensive parole program:

On December 16th, the DC Council staff will walk out in solidarity with the #BlackLivesMatter movement.

You can protest when Black life is taken. But what about when we are ALIVE, still living?!

Take a Stand Against Racially Biased Jump-Out Squads in DC

The DCFerguson movement and the residents of Washington, D.C. demand that D.C. City Council immediately pass a resolution taking a stand against the use of "Jump-Out" squads, a racially biased form of policing. "Jump-Outs" are a paramilitary tactic in which unmarked police vehicles carry 3 or more officers not wearing the standard police uniform. Their objective is to stop and intimidate ordinary citizens into submitting to interrogation or an unwarranted search. This kind of militarized tactic that criminalizes entire communities and creates end-runs around our constitutional rights should stop immediately.

A Season of Giving

Posted by claire cook · December 02, 2014 12:32 PM
~A Season of Giving~
Come learn about organizing for justice and equity in DC, hosted by ONE DC members
Thursday, December 4
7-9 pm
Maitri House
251 Manor Circle, Takoma Park
Join us for an evening of solidarity, hope, and community building to organize for a vision of an equitable DC.

As friends and allies, we'll gather for a evening of great conversation and learning about ONE DC. ONE DC is organizing long-time, low-income DC residents against the threat of displacement and structural unemployment, and for a resident-led People's Platform political agenda.
Please bring your checkbooks and join us in financially supporting ONE DC's campaigns and visionary organizing.
Delicious homemade snacks and desserts will be provided.
Email Karen Leu at kleu82@gmail.com to RSVP.
Share 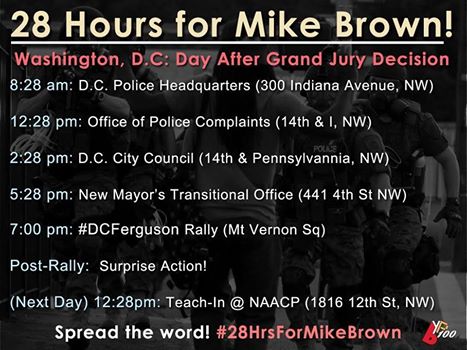 #DCFerguson rally will begin at 7pm at Mt. Vernon Square, 7th and Mass NW Washington, DC Tuesday, November 25th in response to the grand jury's decision in Ferguson, MO to not indict Officer Darren Wilson for the murder of teenager Michael Brown.

#DCFerguson continues to stand in solidarity with the Michael Brown family and the sisters and brothers in Ferguson that are continuing to protest and resist the police murders of Black and Latino people every 28 hours in America.

ANSWER Coalition organizer Eugene Puryear says, "The murder of Michael Brown and the situation in Ferguson can and should be a turning point. Where we finally come to terms with the root causes of these issues and address social deprivation and oppression and the police brutality that comes with it."

The initial sponsors of #DCFerguson include the National Black United Front, the ANSWER Coalition, We Act Radio, the Party for Socialism and Liberation and the American Muslim Alliance, as well as independent organizing networks that have sprung up in the wake of Michael Brown's killing.