First Ever Black Friday in DC

Walmart pushed its way into DC by offering good jobs for DC residents, even promising $13/hour wages. In December of last year, the first two stores opened up. Now, less than one year later, Walmart associates in DC are calling on the company to pay $15/hour and give consistent full-time hours.

ONE DC is calling on our members to stand with Walmart associates this Black Friday in saying "no more broken promises!" Walmart needs to provide living wage jobs with full-time hours, jobs that sustain families instead of keeping them mired in poverty. The Walton family, the controlling family of Walmart and owners of more wealth than 42% of American families, need to Respect DC!

What: Black Friday Protest and March on Walmart

Why: To demand Walmart pay all their workers $15/hour and give consistent full-time hours! 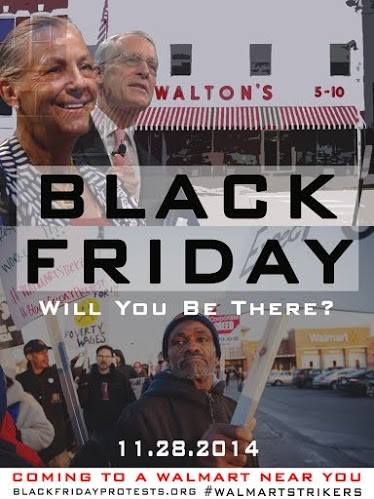 Will you be there on Black Friday to stand with workers? Click here to RSVP
If you're not able to join us for in DC, check out www.blackfridayprotests.org for other events across the country or to plan your own.
There will also be a Thanksgiving Day action in DC at the Georgia Avenue Walmart

Join the movement to build a just, equitable, sustainable economy in DC!

DC is the symbolic heart of the current economy, one that is characterized by deepening inequality, unjust policies, a thwarted democracy, and ecological damage. The endless drive for profit and growth hurt people, communities, and the Earth.

But that's not the whole story. In DC and around the world, seeds are being planted for a new kind of economy -- one that is rooted in the values of democracy, justice, cooperation, self-determination, and sustainability. Join us Saturday, December 6th as we learn about solidarity economy models from around the world and explore how we can build a movement to transform our economy.

There will also be a Time Bank Exchange, Solidarity Economy Market (by ONE Love), and delicious food provided by our local worker cooperative catering company, Zenful Bites. 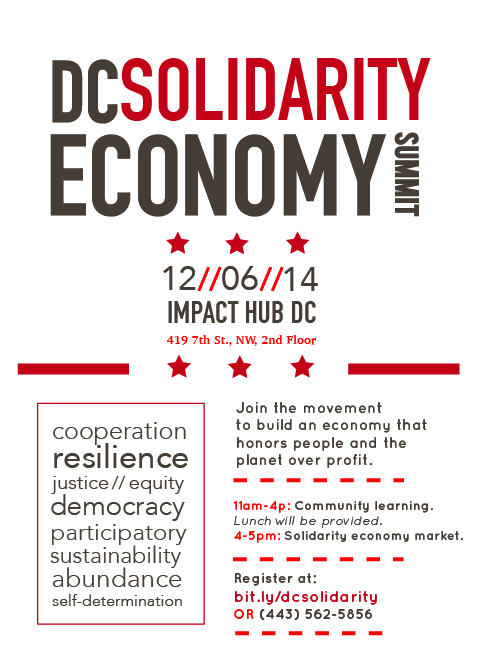 What: A presentation to teach and educate individuals on ways to create wealth and retire in a tax-free environment.

When: Monday, December 1 at 6PM

Save the Date: Member Appreciation December 13 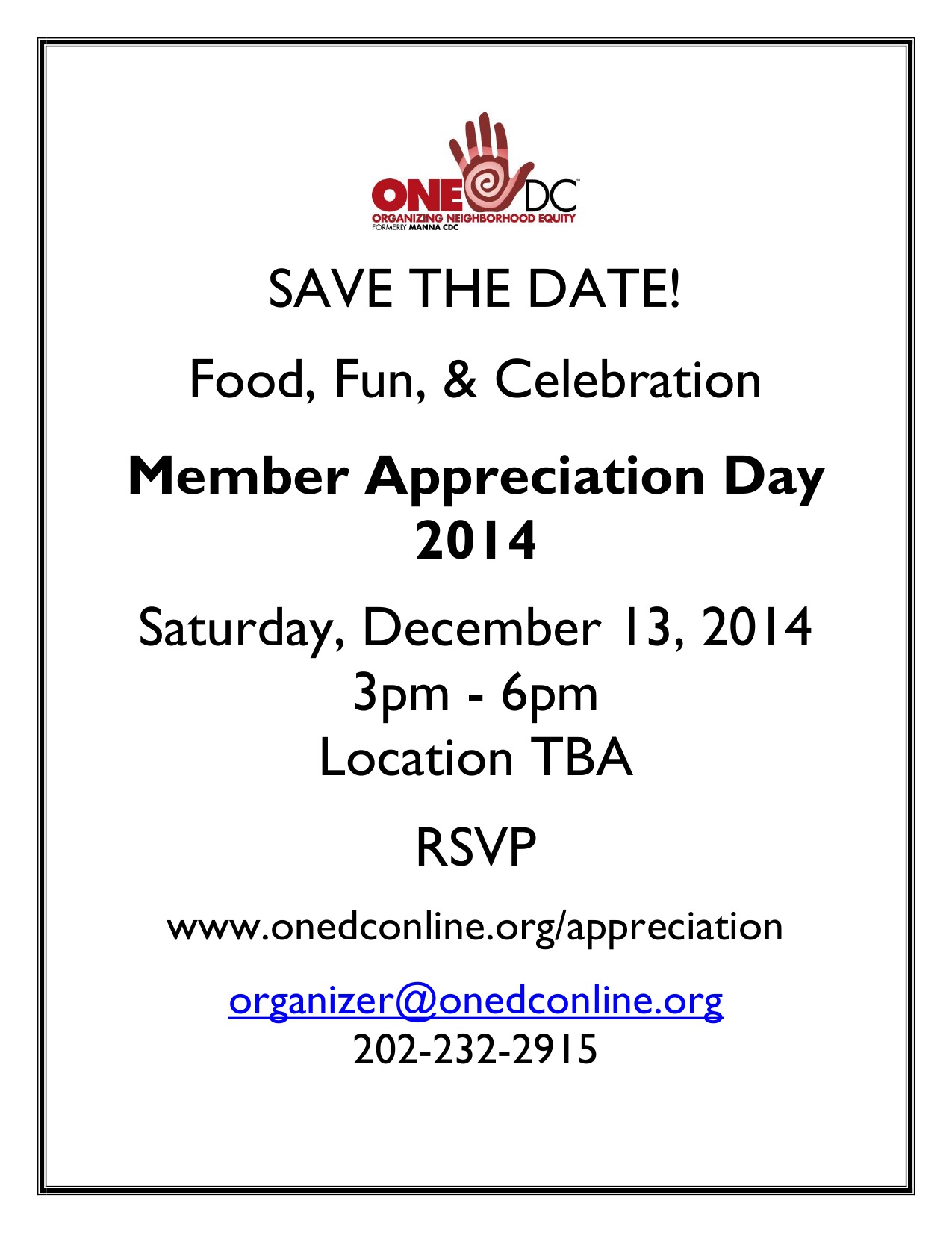 An in-depth discussion about housing trends in D.C. was hosted by Elevation DC Magazine, Oct. 21.

The conversation was an effort to explore the line between preserving affordable housing for long-time District residents and making way for newcomers to enjoy living in the city as well, said David Bowers, VP and market leader at Mid-Atlantic and representative from Enterprise Community Partners, who sponsored the event.

The panel discussion, “Gentrification, Revitalization or Renaissance,” was moderated by Rebecca Sheir, host of WAMU’s Metro Connection and took place at Shiloh Baptist Church in the Shaw neighborhood in Northwest.

The “G word” or gentrification can be a touchy subject, according to panelist Dr. Bernard Demczuk, George Washington University’s assistant vice president for D.C. government relations, African American history teacher at School Without Walls and Ben’s Chili Bowl historian. He said he prefers not to use the term at all.

He argued that word’s associated with the displacement of low-income residents by more upwardly mobile individuals is inaccurate. Instead, the cause is a reflection of the third great wave of American cities.

“It has to do with the natural flow of economics and demographic shifts,” he said. “And ain’t nothing going to stop it.”

Long-time District residents and newcomers attended the discussion. Conversely, Dominic Mouldon, representing non-profit ONE DC, views gentrification as an injustice against people of African descent. “D.C. claims to be a human rights city,” he said. “The crime [of gentrification] is the erasing of civil and human rights for D.C. citizens — the erasing of history, culture and art of long time D.C. residents.”

Read more at The Afro

After successfully demanding a meeting with Councilmember Muriel Bowser, the People’s Platform Alliance, including Mount Vernon Plaza residents, won a temporary reprieve from the management of Mount Vernon Plaza Apartments. Several residents received a thirty-day extension to the initial notice to pay an extra $600 a month or vacate the property.

In a letter dated October 21st, officials from the Department of Housing and Community Development (DHCD) notified the owner of Mount Vernon Plaza Apartments to “cease and desist with any attempts to raise the rents on the rent restricted units without DHCD consent and in violation of affordability restrictions.” In response to this most recent development, Mount Vernon Plaza tenant, Quitel Andrews, had the following to say:

“It is clear the only way tenants are guaranteed any kind of protection is when we organize. Landlords will use any and every opportunity to take advantage of the increasingly expensive rental market even if that means pushing longtime D.C. residents out. It is imperative that city officials use every legal mechanism available to protect tenants. If we did not organize and demand Councilmember Bowser to step in, the owner would have gotten away with unethically and quite possibly illegally displacing residents.”

Despite the letter, property managers at Mount Vernon Plaza Apartments continue to employ intimidation tactics to force residents out.  On Friday, one resident, Alem Gheremariam, received a notice to vacate his apartment before his lease had expired.

The situation at Mount Vernon Plaza Apartments demonstrates the importance of passing legislation that ensures permanent housing affordability in the District and ultimately a comprehensive strategy that addresses the housing needs of all D.C. residents.

The demonstration in Councilmember Muriel Bowser’s office is the first step in holding elected officials accountable. D.C. officials must be pushed to embrace a more inclusive housing plan for the city. Most importantly, the next mayor will play an integral role in creating a truly equitable D.C for all residents.

The People’s Platform Alliance will continue to organize until the economic, racial, and gender inequities affecting low-income people are eliminated.

Music, slam poetry and featured speakers who are working to end displacement of DC residents to promote a more equitable city. For more information visit bypeacefulmeans.org 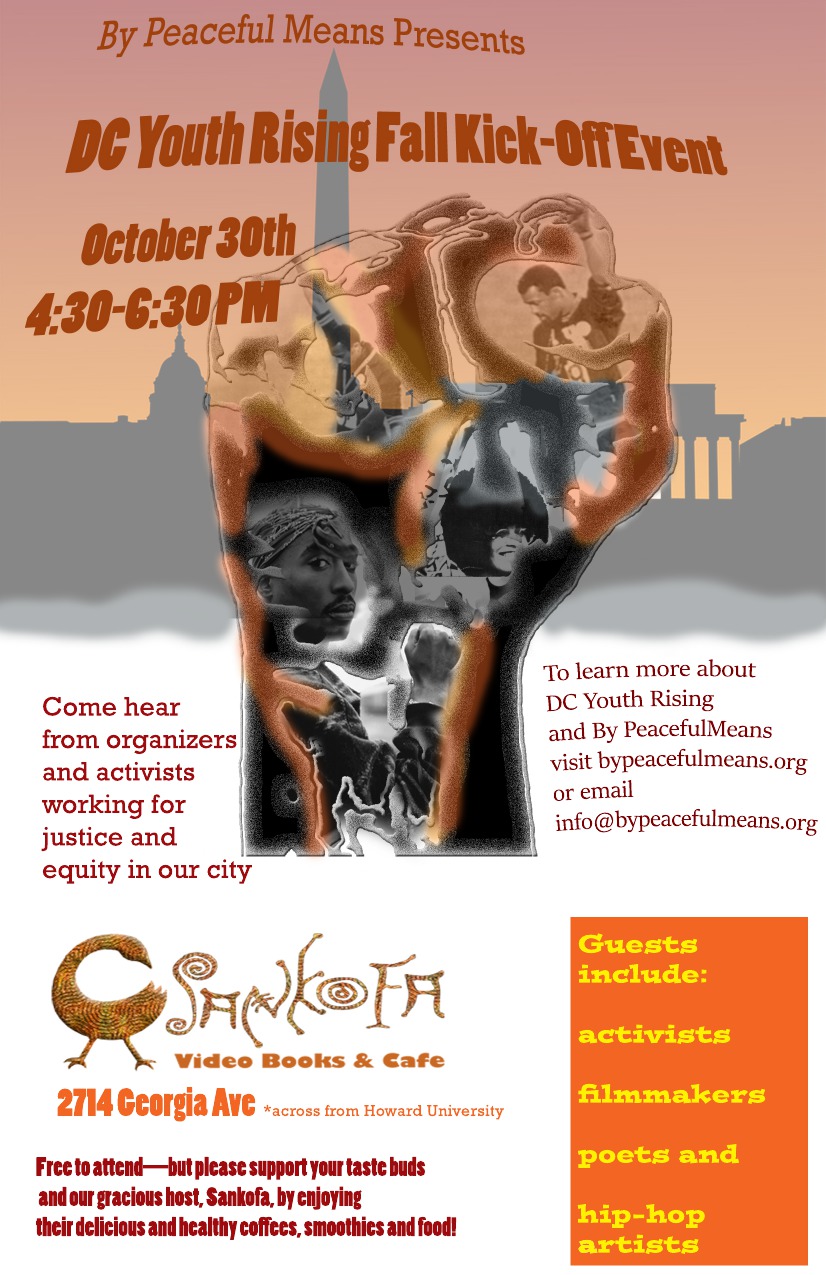 About two dozen demonstrators attempted to enter Councilmember Muriel Bowser's office in the Wilson Building today to ask for legislation in support of their affordable housing plan, but were blocked as a group from entering.

"This is the people's house," one demonstrator with ONE DC told a guard blocking the door. "They can't do this. ... I'm a D.C. resident, and I pay taxes here." The guard explained that, while the building is open to the public, Council staff may restrict entrance to offices if the activities are expected to create a disruption.

Five people, some residents of Mount Vernon Plaza, others affiliated with ONE DC, were eventually allowed to enter the office to explain to Joy Holland and Robert Hawkins, Bowser's chief of staff and legislative director, respectively, their demand: A written comment from Bowser on the People's Platform, which includes a call to freeze rents at places like Mount Vernon Plaza, one apartment building where local and federal affordability requirements are soon set to expire. Residents of Mount Vernon Plaza say they were not told a Low Income Housing Tax Credit was set to expire at the end of 2013, increasing their rents by hundreds of dollars.

And We Are Not Yet Moved: The Ferguson Decisions

The air isn’t different in St. Louis, but you breathe differently in the show-me-state. It is the tension riding the air after a Black boy’s body breathed its last. Michael Brown’s spirit animates the streets and even the empty night air surrounding United Church of Christ. The Black Alliance for Just Immigration (BAJI) has answered the call from Ferguson, MO. Black Lives Matter, at least to the bodies huddled in the shelter offered by Pastor Starsky Wilson. Local and national churches stand at the juxtaposition of another cross road filled with political questions. For United, all roads lead to Ferguson and @LostVoices14, @TefPoe, and @Nettaaaaaaaa; youth on the ground with platforms to chart the path. The “Politics of Jesus” are being resurrected. That is something.

The pews are filled now and we have yelled origins as far as Canada and as near as Ohio and John Crawford’s body. Moments of silence give way to whispers of ancestors and their names tear the heavens with the urgency of the collective demand. Those who have gone before are remembered and present. Near trembling the room hums with whispered anticipation of what this shared space can mean. We are animated by outrage at the public brutality that removed Michael Brown from this plane and laid his body in the street for hours. Somebody near by talks about being unable to listen to Lesley Mcspadden, the mother of Michael Brown, speak. None of us could honestly but despite being unable to hear her pained tones we have responded and the room is filled with many Lesley McSpadden’s. A few hundred organizers from around the country and the overwhelming majority are Black women. So many women, present, doing the necessary work. We are all here for Michael Brown; Patrisse Cullors shares the stage with Darnell Moore and we are told this is not Bayard Rustin 2.0 and no one will have to hide who they are for the sake of the collective. If Black political thought is to mature into a new movement it must mean that all black bodies matter. We know this, we say this; do we do this? This has yet to be seen.

Once we state our shared principles that all Black Lives Matter it is left to discuss the particular demands. These are organizers and the mass is quickly separated into groups, by sections, and skill sets and the days roll by. In there we learn about the way the police displayed the body publicly, disrespected memorials, and showed complete disregard for the community in the initial hours after the murder. The act then is echoed again into the minds of the children who watch us march and stand on their laws in eyesight of where the body rested without peace. We learn how the formally and informally organized community members worked to keep the police out of the neighborhood on the day of the murder. Then as organizers do we discuss demands, legal procedure, power leveraging, and chest-mounted cameras for the police.

There is a disturbing discrepancy between the actions of a grieving community and our policy ideas that we can not yet speak to. Not now at least, not while we are building our campaigns. We have to change the antiblack media narrative, we need to establish police review boards like in New York to curtail state sanctioned violence. However, our thinking there is the understanding that this is only the beginning. With reports on the frequency of police violence, some are charging genocide, and here at BAJI we support those efforts and offer at the very least ideas. What will this next wave of movement become? It can be a new more interesting movement or something all too familiar and we have not yet decided.

More than a dozen residents of a D.C. apartment building and advocates for the poor staged a sit-in Monday at the council offices of Muriel E. Bowser (D-Ward 4).

Members of ONE DC, a social justice group, said they had unsuccessfully requested a meeting with Bowser, the chair of the committee with oversight of housing issues, since July regarding rising rental costs at Mount Vernon Plaza apartments.

Under terms of public loans and grants to the property dating to the 1980s, owners of the building had long been required to maintain more than 60 apartments as low-rent units. That obligation recently expired, and tenants in the building near the Walter E. Washington Convention Center began receiving letters warning that rates would increase $500 to $600 a month, or about 50 percent. Rents would rise again next year by a similar amount, the letters said, to reach market rate.